Most types of Italian gnocchi are really dumplings! Dumplings, in general, are an ancient food popular in many countries around the world. They can be made with different types of flour like wheat, chestnut, buckwheat, rice and semolina and/or other ingredients such as ricotta, potatoes, dry bread, tubers or various vegetables. 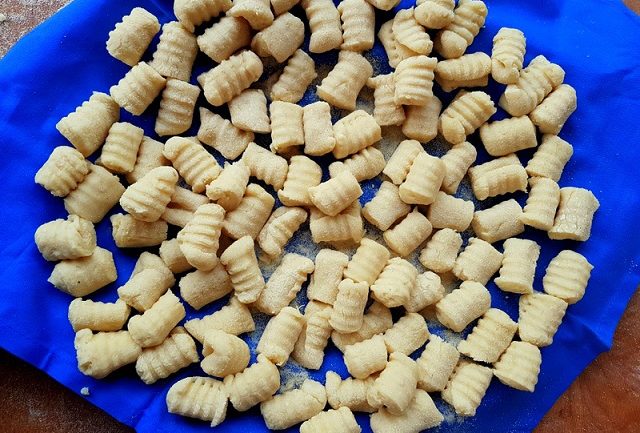 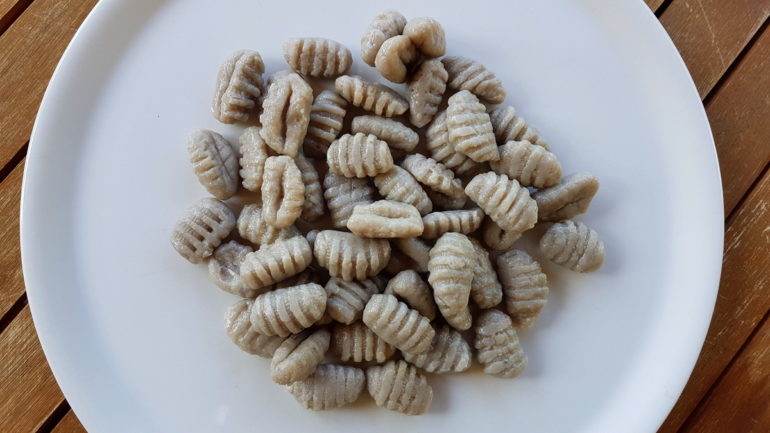 gnocchi made with buckwheat 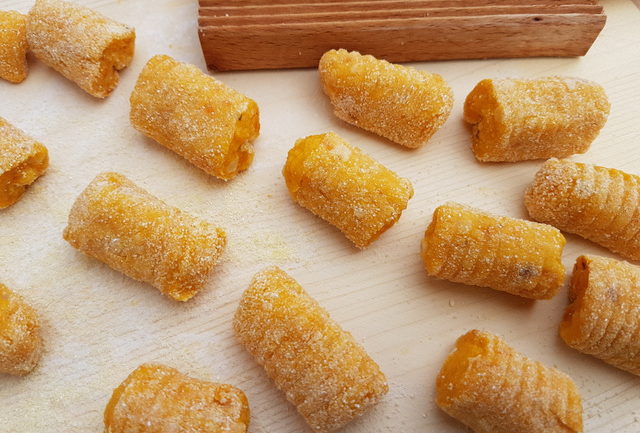 Many Italian regions claim gnocchi as their own, but although they are more predominant in the Northern regions, they are cooked and eaten throughout the country. The most widespread Italian gnocchi are prepared with potatoes mixed with flour and sometimes eggs. However, gnocchi made with a simple dough of water and flour are also very popular as are those made with semolina. 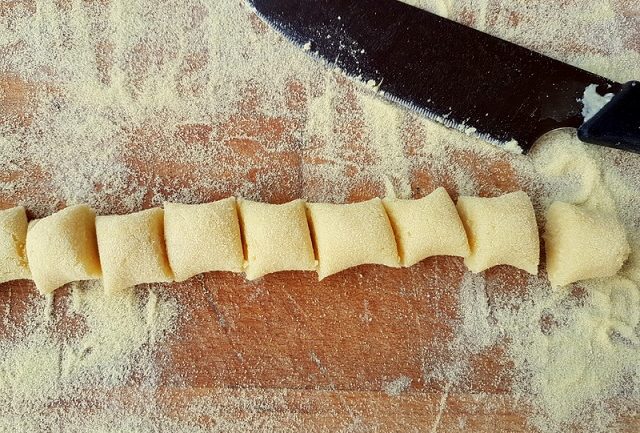 A number of other types of Italian dumplings also exist depending on local or regional culinary traditions.  In Italy, gnocchi are almost always homemade or bought fresh. I know it’s possible to find dried or frozen gnocchi, but I haven’t seen them in the shops where I live.

Italian potato gnocchi date back to the start of the 18th century, long after potatoes were brought to Europe from South America by Spanish explorers and introduced to Italian kitchens. During the 16th and 17th century, in most parts of Europe, potatoes were regarded with suspicion, distaste and fear. They were used only as animal fodder, to feed prisoners of war and sustenance for the starving. 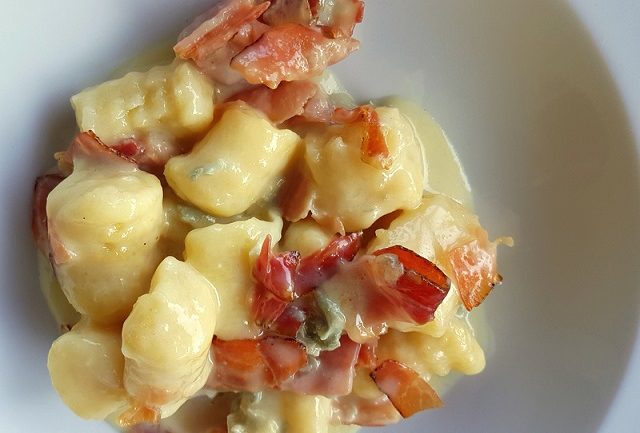 gnocchi with gorgonzola and speck

In northern European countries, potatoes were primarily grown in botanical gardens as an exotic novelty. Even peasants didn’t want to eat from a plant that produced ugly, oddly shaped tubers and that had come from a heathen civilization. Some felt that the potato plant’s resemblance to plants in the nightshade family meant that it was created by the devil and probably poisonous. The first Italian regions to begin cultivating  potatoes for human consumption were Tuscany and Veneto, followed by Emilia-Romagna. 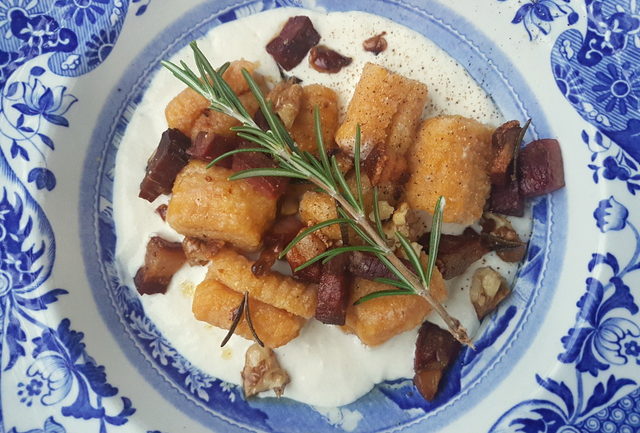 Pumpkin gnocchi with speck and walnuts

Other types of gnocchi, however, have existed in Italy since the Renaissance or even earlier. Some food historians say it was the Romans who first discovered  and then introduced dumplings to other European countries, although Roman dumplings were made of semolina and eggs, similar to the gnocchi ‘alla Romana’, still popular in Rome and Lazio today. 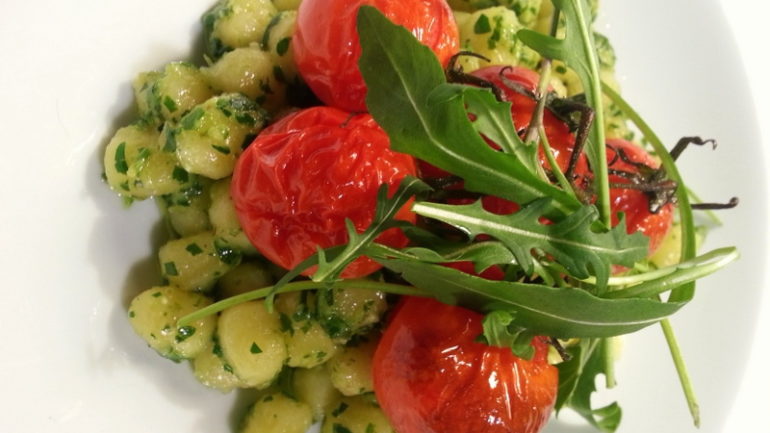 In 15th century Lombardy, gnocchi called zanzarelli  were made of bread, milk, cheese and ground almonds. Later some gnocchi started to be made from a dough of flour and breadcrumbs mixed with water and pushed through the holes of a cheese grater. In the 17th century, the almonds in zanzarelli were replaced by flour and the water by eggs. These gnocchi were called Malfatti, which means ‘badly made’ and is still the name that Tuscans use for their flour, spinach and ricotta dumplings also called ‘gnudi‘. 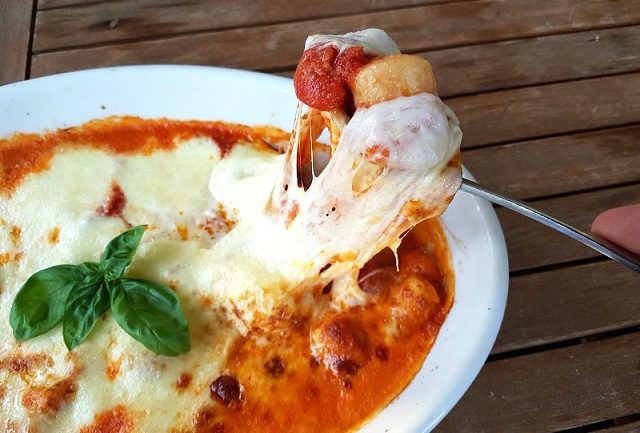 Almost every Italian region, especially in the north, has its traditional gnocchi variation and recipes for serving them. In Piedmont or Lombardy, potato gnocchi are simply tossed in butter and Parmigiano Reggiano cheese or eaten with a creamy, cheesy sauce which has been browned under a grill before serving.  Here, in Veneto, potato gnocchi are traditionally served in a tomato sauce. This dish is associated with Carnival and dates as far back as the 1500s. In Liguria, they often serve these potato dumplings with a pesto sauce. 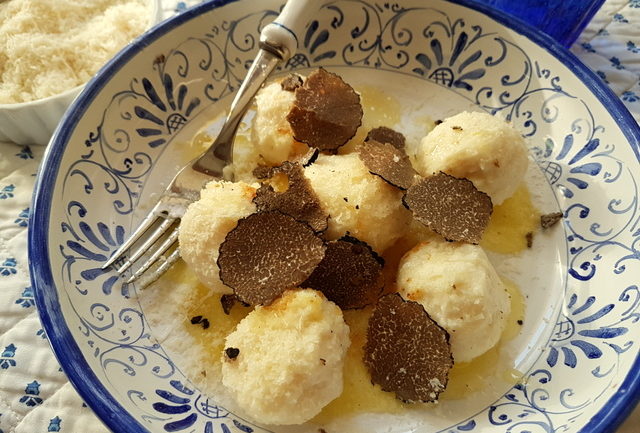 In Friuli, they make a large potato gnocchi, stuffed with a whole plum and tossed with melted butter and sugar. In Piacenza, Emilia-Romagna, they make green ‘chicche’, also known as gnocchetti, which are little dumplings often made with spinach and seasoned with a Gorgonzola cheese sauce! A Southern Italian recipe which I love is the super delicious gnocchi ‘alla Sorrentina’; baked potato gnocchi seasoned with a fresh tomato sauce, mozzarella, and fresh basil leaves. And, as mentioned above, in Tuscany they make spinach and ricotta dumplings called ‘gnudi’. These dumplings are really a ravioli filling without the pasta! People sometimes make them without the spinach and refer to them as ricotta gnudi.

Other types of gnocchi.

Apart from potato or ricotta gnocchi, there are a number of other types of gnocchi to be found throughout Italy.  One of my favourites is the North Italian canederli.  Very similar to the medieval gnocchi, these dumplings are made with bread, milk, flour and often a cured meat, such as speck. They are normally served with cabbage or in broth and garnished with chives. When in Mantova or Parma, an absolute must try is the gnocchi made with pumpkin which are typically tossed with butter, Parmigiano Reggiano, and fresh sage! 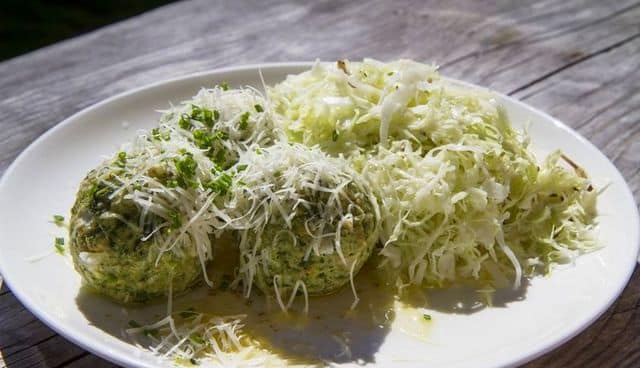 Finally,  another delicious classic recipe is gnocchi ‘alla Romana’ (which I mentioned before), made with semolina flour, pecorino cheese and butter. These are a must try when visiting Rome or you can make them yourself . Check out the recipe for this and other types of gnocchi so far posted on The Pasta Project. 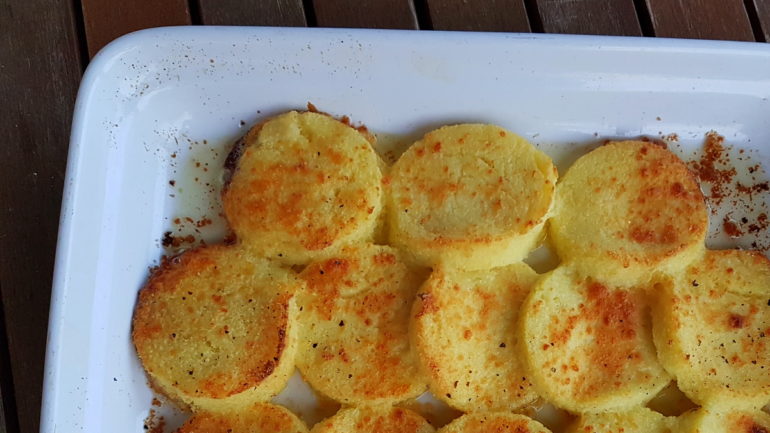