Cheese and pepper pasta from Rome.

Pasta cacio e pepe is a traditional recipe from the Eternal city, Rome and the Lazio region in general. This easy to make Roman classic has only 3 main ingredients; Pecorino Romano cheese, black pepper corns and, of course pasta! It can be on the table in about 30 minutes, so perfect for a weeknight meal but special enough to serve to guests!

The origins of cacio e pepe.

Like many popular pasta dishes, the roots of this pasta cacio e pepe can be found in the simple food of the peasant population. In this case, mainly the shepherds of the Agro Romano – a term first used in the 15th century to describe the vast rural area of hills and plains that surrounded Rome.

Italian food historians say when shepherds stayed out with their flocks or moved them to different grazing areas, they would carry a number of dried foods to sustain themselves. These included dried tomatoes, dried pork cheek, cacio cheese (pecorino Romano), pepper corns and dried homemade pasta. From these ingredients, they produced simple filling meals like cacio e pepe and all’amatriciana.

Apparently, the pepper corns were included because they helped the shepherds to stay warm during the chilly nights outdoors! Pecorino was the cheese of choice. As a sheep’s milk cheese, it was mostly homemade and once dried, pecorino has a long life. Pasta, of course, added bulk to the meal and was easy and cheap to prepare.

What does cacio e pepe mean?

Basically, cacio e pepe means cheese and pepper. In fact ‘cacio’ is used to mean cheese in a number of Italian regions. For example, caciocavallo means horse cheese. It got its name because the cheese is matured whilst hanging over a horizontal beam like a saddle horse. In Rome, when they say ‘cacio’ they refer to Pecorino Romano.

It’s interesting that many of the ‘dishes’ we see today on smart Italian restaurant menus in Rome, as well as cities like London and New York, started out as simple fare for the poorer, rural Italian population. I recently read that cacio e pepe was declared New York’s trendiest dish 2016 by Time Out Magazine!!

Despite being very trendy, cacio e pepe is far from pretentious. It is easy to make once you have got the hang of it. Plus, it needs only 2 ingredients, apart from the pasta, Pecorino Romano cheese and black pepper corns!

The only trick is to find the perfect balance between the cheese and the pasta. It’s important that the dish doesn’t turn out too dry or the sauce too lumpy or liquid. Once you have got that right, this is a dish you can produce in less than 30 minutes, including the time it takes to boil the water for the pasta.

Believe it or not, there are different ‘ways’of making this simple dish. In my research, I’ve come across a number of articles, in both Italian and English, on the merits of the different techniques!

Some people just boil the pasta al dente, and then vigourously mix it with grated pecorino, freshly ground pepper corns and some of the pasta cooking water. This is reserved before draining the pasta and gives the dish a creamy consistency. This is what I did, although I cooked the pepper in a dry frying pan to bring out the flavour first.

Others advocate mixing the cheese together with the ground pepper and some of the pasta cooking water in a bowl before adding the pasta to it. Another variation involves adding a little butter or oil to the pasta before mixing in the cheese, cooking water and pepper. In general, cacio e pepe may need a bit of practice to get right. But, once you do, you are bound to fall in love with this pepper pasta. To me it’s pasta au poivre!

What kind of pasta should you use?

There are also different views on which pasta works best in this recipe. In Rome and Lazio, they often make cacio e pepe with either thick long pasta such as bucatini , spaghetti alla chitarra (called tonnarelli in Rome), lombrichelli or even just normal spaghetti (although some Roman chefs think normal spaghetti is a no no!) Others prefer to use short tubes like penne or rigatoni or something in between such as pici, short hand rolled thick spaghetti.

In the past, I have used bucatini and tonnarelli to make cacio e pepe. For this post, I used fresh lombrichelli which some friends sent me from  Lazio. It’s actually very similar to tonnarelli. Obviously, it’s great to be able to make cacio e pepe with traditional pasta. However, even if you have no other choice but normal spaghetti, don’t despair. It will definitely taste great anyway!

How to stop the cheese from clumping.

Some people have a problem with getting the Pecorino to melt without clumping. This could depend on the quality of the cheese, especially if it’s not Italian Pecorino Romano. One way to avoid this is to mix the cheese with some hot pasta cooking water until it melts before adding them both to the pan.

Although this recipe traditionally has no meat or seafood in it, cacio e pepe is not vegetarian. This is because Pecorino Romano is made using animal rennet. The same is true for Parmigiano. To make this recipe vegetarian, you will need to use a different hard cheese.

If you do try this cacio e pepe recipe from Rome, I’d love to hear what you think. Please write a comment here on the blog or post a comment on the Pasta Project Facebook page. 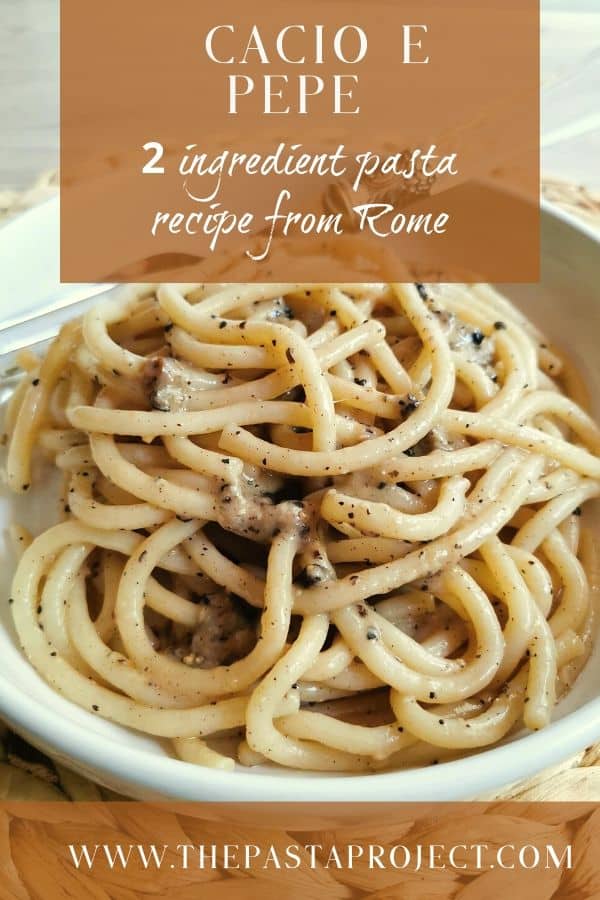 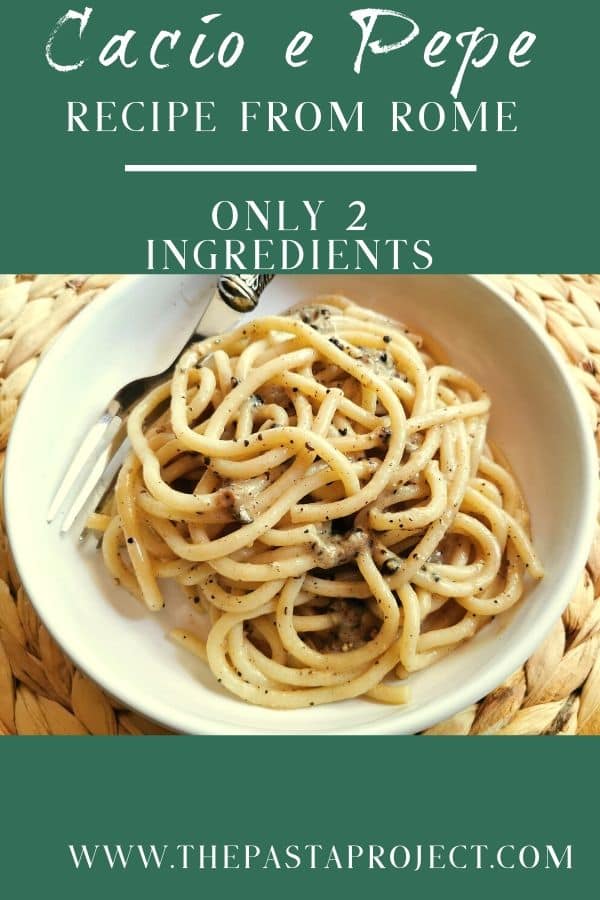 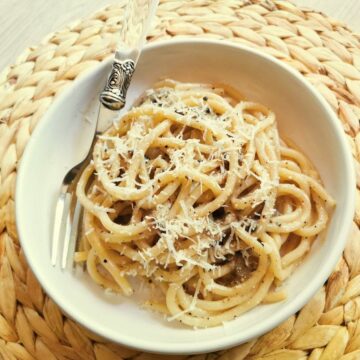 An alternative way to make the sauce is to put the cheese and most of the pepper in a large, heavy bowl or pan and beat in some of the pasta water very gradually to make first a paste, and then a sauce the consistency of bechamel.
Add the pasta and toss well while adding more water if necessary, until you have a sauce that coats each strand of pasta. Don’t worry if it takes a while to come together – keep mixing and it should happen.
It is also recommended to use less water than usual when cooking the pasta (about half), because this will result in cooking water that is rich in starch and will make it easier to obtain a creamy result.
Keyword authentic Italian pasta recipe, cacio e pepe, pecorino, Roman cuisine