What’s in a name?

Pasta is most definitely the center of the Italian gastronomic universe. There are many views on how many different  pasta shapes there are. Some people say 360+, others reckon there are far more. According to an article I read, the most well-known Italian pasta makers produce a varied number; Divella produces 140 types, De Cecco as many, Barilla about 50, Buitoni over 60 and  Agnesi about 40.

However the names of different pasta shapes can vary depending on the region or the manufacturer. Sure, spaghetti are always spaghetti, but fusilli are sometimes called eliche. Tortiglioni  (maccheroni with grooves that curve around the pasta) are elicoidali for some, while in Umbria they call them boconotti, which in a large part of southern Italy are actually filled with cream, chocolate, almonds and  jam. They sound delicious, however, you would never want to eat them with ragu!

But what’s in a name! The difference here is in how this pasta is traditionally made.‘Chitarra’ means, yes you’ve guessed it, guitar! The reason for this is the piece of equipment used to make this pasta. The chitarra is a rectangular wooden frame with parallel wires running across it from top to bottom. The rolled out pasta dough is placed on the chitarra and pushed through the wires by rolling a rolling pin over the top of the dough. Pasta makers in Abruzzo release the pasta strands from the wires by ‘playing’ them as they would a stringed instrument!

The resulting pasta looks like square spaghetti and has a porous texture. There is a similar type of pasta made in Lazio called tonnarelli and a thicker version called cariole. Some commercial pasta makers produce an egg free dried variation which is sold in other parts of Italy and abroad. The chitarra was apparently invented in 1890 in the Abruzzo province of Chieti, before that pasta was cut using a special rolling pin with notches in it for the shape.

In Abruzzo, maccheroni alla chitarra is typically eaten with a mixed meat ragu which includes lamb and tomato sauce seasoned with peperoncino or a lamb ragu with sweet peppers or with tomato sauce and tiny veal meatballs called pallottine. It is also often served with a simple spicy tomato sauce or with pesto Abruzzese which is a spicy pesto made with peperoncino,  sundried tomatoes, black olives, pecorino and anchovies.

I am planning to post more alla chitarra recipes soon but until then you can take a look at my alla chitarra with saffron and pancetta, another delicious recipe from Abruzzo. In the meantime if you’d like to give making this pasta a try I’ve posted the recipe and you can buy the chitarra online from various sites, including Amazon! 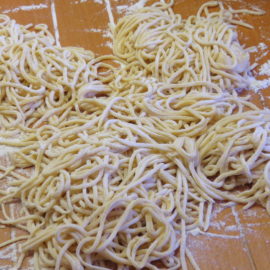 You can buy a chitarra pasta cutter from Amazon.