Spaghetti alla carbonara is probably ‘the’ most well known Italian pasta recipe. Well, maybe alongside spaghetti bolognese! And like spaghetti bolognese, it has been reinvented a thousand times outside of Italy. Of course, different versions of carbonara are good too. But the original recipe really needs nothing added to it because it’s delicious as is!

Like so many other Italian dishes, carbonara has a disputed history. The most commonly accepted theory is that it probably originated in or near Rome in the Italian region of Lazio. But how is the question!

Theory no 1; It is believed that Umbrian coal men called ‘carbonari’ ate it themselves and  introduced it to the Romans when they came to sell charcoal to them.

Theory no 2; It has also been said that carbonara was named for the ‘Carbonari’ a secret society in existence during the time of Italian unification (Dan Brown take note!)

Theory no 3, which to me may have merit since published carbonara recipes date only from the second war onwards, is that it developed as a result of the demands of American soldiers stationed in Rome after the city’s liberation in 1944 and the fact that these very soldiers supplied the Romans with bacon and eggs.

How do Italians make alla carbonara?

Whatever its origins, it’s certain that alla carbonara has become a worldwide favourite pasta dish – although one that has many non-Italian versions!

I have always called spaghetti carbonara ‘Italian bacon and eggs’ because basically that’s what it is; eggs, bacon, pasta, grated cheese and pepper. I think it’s the combination of bacon and eggs that makes this one of the most popular pasta dishes in the West, especially with the British and the Americans.

No vegetables! No cream!

Over time, authentic Italian carbonara has been altered by the British, the Americans and others. I did a little experiment and searched through Instagram posts hash-tagged  #carbonara. Needless to say, I found a zillion variations including ingredients such as cream (lots of cream, sometimes the pasta is swimming in it!), peas, leeks, broccoli, tomatoes and mushrooms. It seems that these additions have become so common in America and England that it’s now considered the norm to make this dish with some kind of vegetable and cream. In Italy, it really isn’t!

Like many Italian pasta dishes, alla carbonara is a simple dish with few ingredients. But, it’s the quality of the ingredients and what you do with them that make the difference. The majority of chefs agree that ‘true’ carbonara contains guanciale (pork cheek) and not bacon or pancetta. However, both make fine substitutes as long as they are quite fatty and cubed. Guanciale renders quite a lot of fat so you don’t need to cook it in olive oil.

Mixing the pasta to combine the ingredients is an art and the quality of the cheese (Parmesan / Pecorino) and the pasta are significantly important. Black pepper is essential! Some Italians use only whole eggs, others use yolks. My hubby sometimes makes it with just egg yolks. This gives the dish an orangey colour! The general rule is one egg or egg yolk per person.

Spaghetti is the usual pasta for alla carbonara. However, linguine, fettuccine, bucatini and rigatoni can also be used. Rigatoni is the second most popular pasta for carbonara in Rome. The recipe I used is one that my Italian hubby follows. It is also very similar to that of the late Antonio Carluccio who was the author of 20 books on Italian cooking. Mr Carluccio said in his own recipe book “Most people I know get it completely wrong! Either adding milk or cream or letting the eggs become scrambled!”

You can watch Antonio Carluccio making his carbonara on Jamie Oliver’s You Tube channel below.

Even if you normally make your carbonara differently, it’s worth trying it the Italian way! I’m sure you’ll love it!

If you do try this authentic spaghetti alla carbonara recipe, I’d love to hear what you think. Please write a comment here on the blog or post a comment on the Pasta Project Facebook page.

Other classic pasta dishes from Rome on the Pasta Project.

(This recipe has been updated with new photos and text) 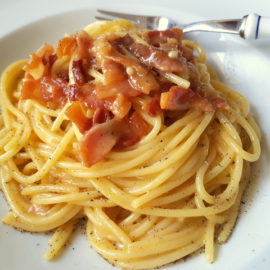 As mentioned in the post, the majority of chefs agree that “true” carbonara has guanciale and not bacon or pancetta, although both make fine substitutes as long as they are quite fatty and cubed.
Spaghetti is the usual pasta, although linguine, fettucine, bucatini and rigatoni can also be used.
Keyword alla carbonara, carbonara, Italian recipe, Roman cuisine, spaghetti