Pasta alla Gricia is a Roman recipe of very ancient origins. In fact, according to food historians, this recipe was invented around 400 AD and was a typical dish served in the taverns of Ancient Rome. It’s also often referred to as white Amatriciana! 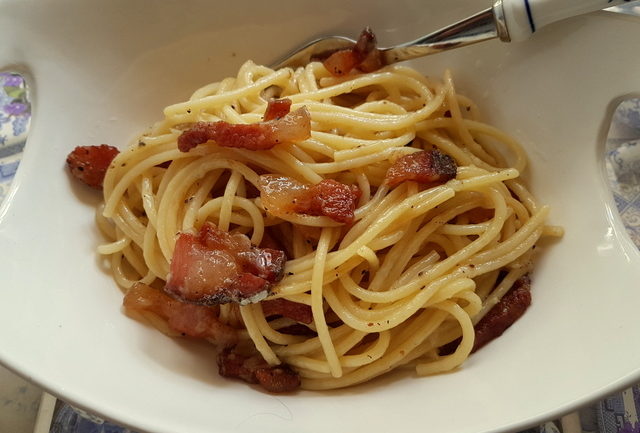 When in Rome, the four pasta dishes that you are most likely to find in any trattoria or osteria (tavern) are Carbonara, Cacio e Pepe, Amatriciana and alla Gricia. Interestingly, the first 3 have become very well-known and popular in other countries too. The last recipe, pasta alla Gricia, has somehow escaped the culinary limelight.

This is surprising given it’s actually the oldest of these Roman pasta recipes and considered to be the original recipe from which the other 3 recipes developed. Think about it! Add some eggs to this dish and you have a carbonara. Add tomatoes and you have amatriciana. Take away the guanciale and it becomes cacio e pepe! 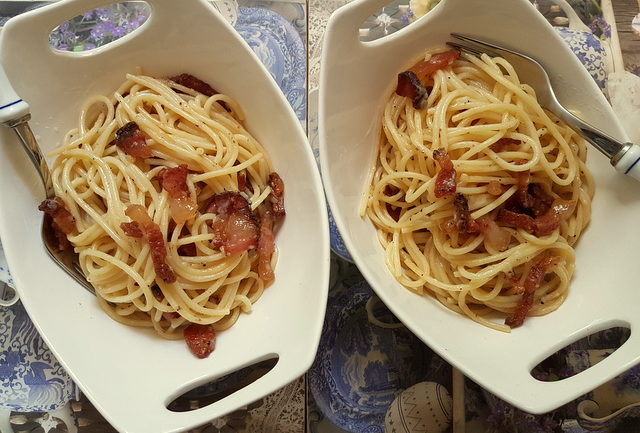 Like other classical Italian recipes, the exact origins alla gricia are uncertain. Some believe that the recipe originally came from a town called Griciano, from where its popularity spread to Rome and the rest of Lazio. Many believe that this dish is started as a meal eaten by the shepherds of the area as it was made from pasta, cheese and cured pork. These were all things that the shepherds could carry around with them for days as they grazed their sheep. 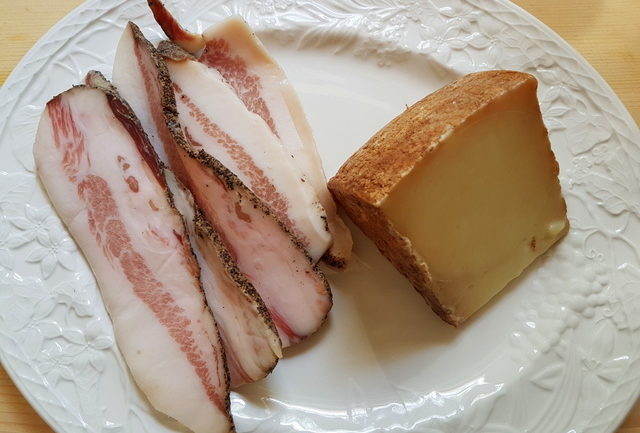 Interestingly, Griciano is not far from Amatrice, another town that has become well-known for its much-loved pasta recipe invention, l’Amatriciana. However, pasta alla gricia pre-dates l’Amatriciana by centuries because tomatoes weren’t used in the Italian kitchen until 1800s. 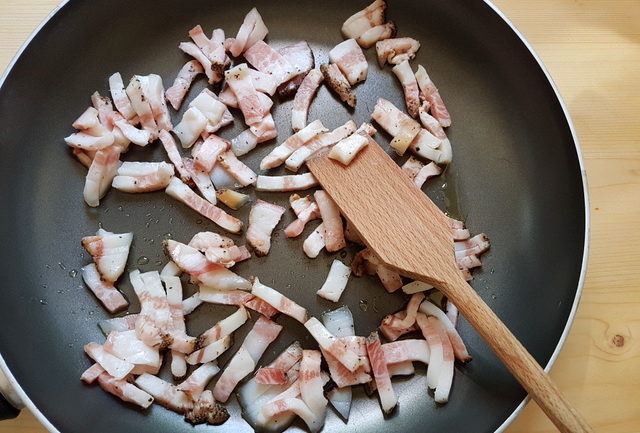 Another theory on the origins of pasta alla gricia is that this dish was invented by bakers who came from Germany or Switzerland, especially from the canton of Grisons. The Romans called these people ‘grigioni’.  The grigioni were specialized in bread-making. In fact, they were the only bakers in Rome to be called ‘maestri dell’arte bianca’ (white art masters). Food legend says that the Grigioni spent most of their time in the shops where they worked, ate and slept. Over time, they are believed to have turned to pork curing. And, one of the meals that they prepared was ‘alla gricia’. 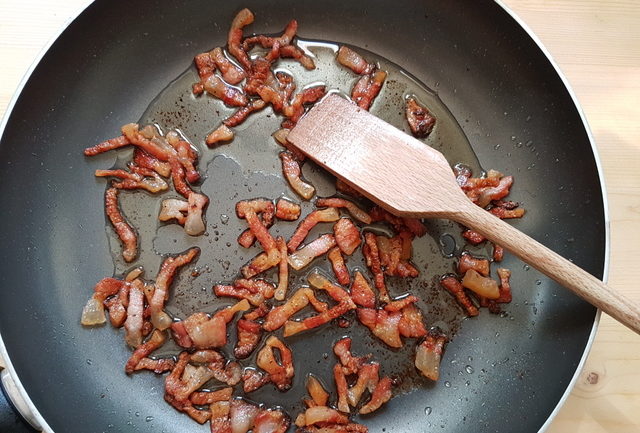 The most important step to cooking an authentic Roman pasta alla gricia is using the right ingredients, of which there are very few. In fact, apart from guanciale (cured pig cheek/jowl) and Pecorino Romano this recipe only needs spaghetti (or rigatoni) and black pepper. Yes that’s it! 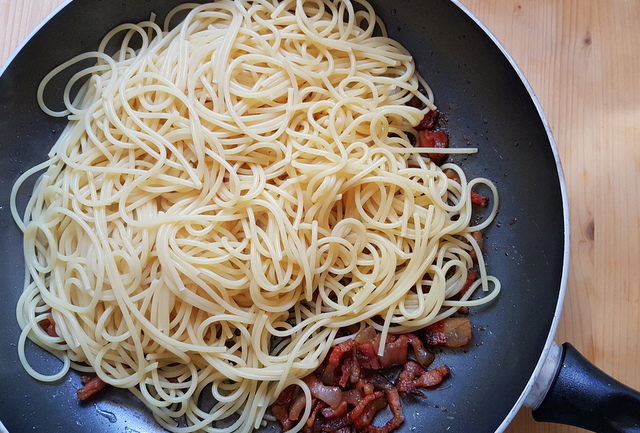 The thing that makes pasta alla Gricia special is the guanciale. Traditionally, this is rubbed with salt, pepper and spices and then hung for at least three weeks before being sold. It has a stronger taste than pancetta. It’s also quite fatty and its rendered fat is what flavours this dish. In fact, guanciale rather than pancetta is the preferred ingredient for both Amatriciana  and Carbonara too. In pasta alla gricia, it really is the star ingredient. 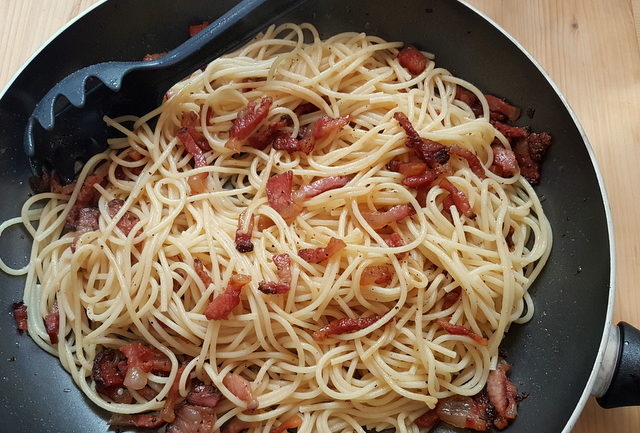 Despite the simplicity of the ingredients, pasta alla Gricia is super tasty. Of course, you could use Parmigiano and pancetta instead. But, it won’t taste the same! Guanciale has a unique, intense flavor, and Pecorino adds a slightly salty, sharp back note. The combination of these two flavours are what make this dish. 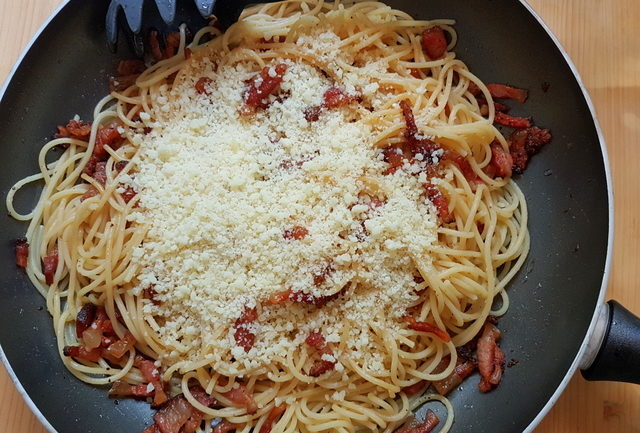 Some Italians make pasta alla Gricia with a little peperoncino (red chili pepper). But, since chili peppers came to Italy from South America with the Spanish explorers (like tomatoes), peperoncino isn’t in the original recipe. Nor are onions, garlic or any herbs. Before being tempted to add any other ingredients, I would suggest trying this recipe with just the authentic ingredients. I’m sure that you’ll love it as much as the Romans do! 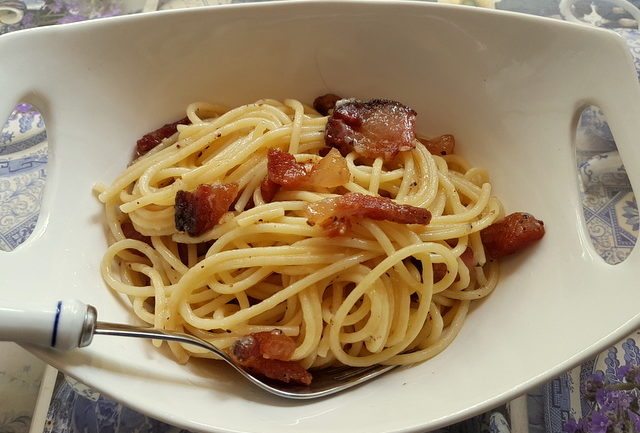 If you make this pasta alla Gricia recipe, I’d love to hear how it turns out and if you liked it. So, please leave a comment here on the blog or on The Pasta Project Facebook page.

Have you ever cooked the other 3 classic Roman recipes mentioned above? If not take a look at the recipes. 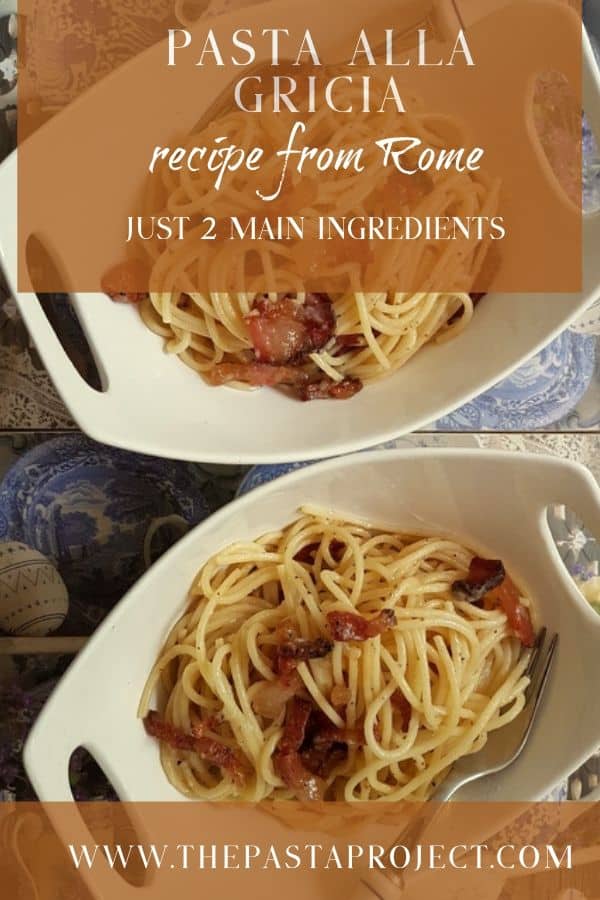 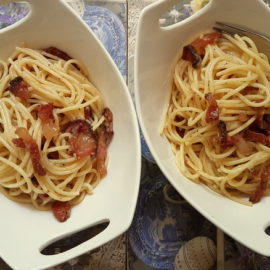 Jacqueline De Bono
This very quick and easy traditional classic Roman pasta recipe is made with very few ingredients but is so delicious you're bound to love it as much as the Romans do!
5 from 21 votes
Print Recipe Save Recipe Saved!
Prep Time 10 mins
Cook Time 20 mins
Total Time 30 mins
Course Main Course
Cuisine Central Italy, Italian, Rome & Lazio
Servings 4 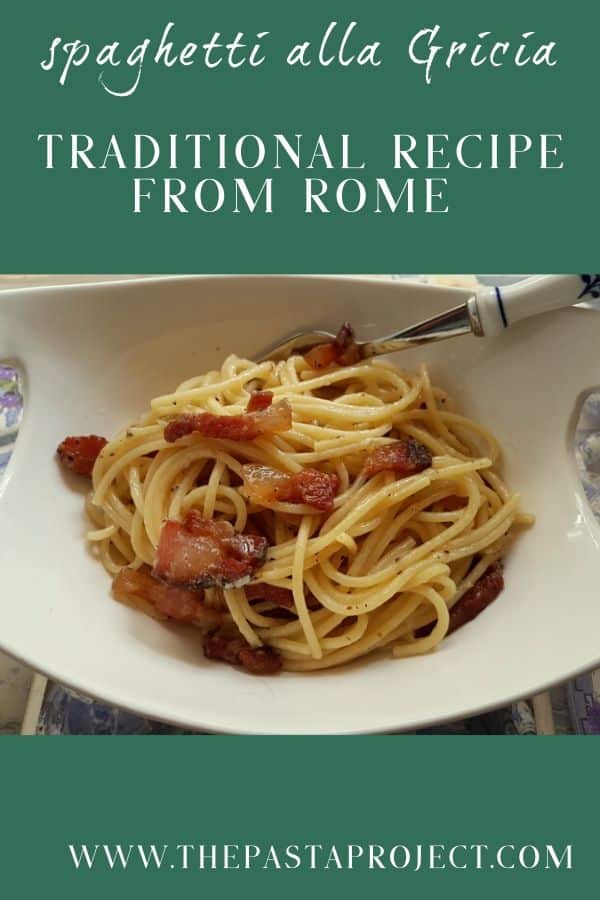