Lombrichelli is an ancient typical fresh pasta from Tuscania and Viterbo in Lazio, which is made by kneading flour with salt and water to make a hard dough that is then worked one piece at a time to make thick, coarse spaghetti.  Making lombrichelli reminds me a little of playing with clay, play doh or plasticine as a child. We used to roll out long pieces and then create little ring pots with them! The word lombrichelli actually translates to worms and in fact, this pasta does resemble earthworms!

There are a number of similar types of flour and water hand rolled ‘spaghetti’ in other Italian regions. So, if you are visting Umbria, you will find the same kind of homemade pasta, but they call it umbricelli, which also means worms in the local dialect. In Tuscany they may call it bringoli! In addition, there are also pastas made the same way but with egg or olive oil added to the dough mix. And yes, these have different names, such as pici in Tuscany.

According to some Italian food historians, hand rolled thick spaghetti like lombrichelli were one of the first types of pasta to be taught in peasant families to young girls by their mothers whilst waiting for the men to come back from the fields. 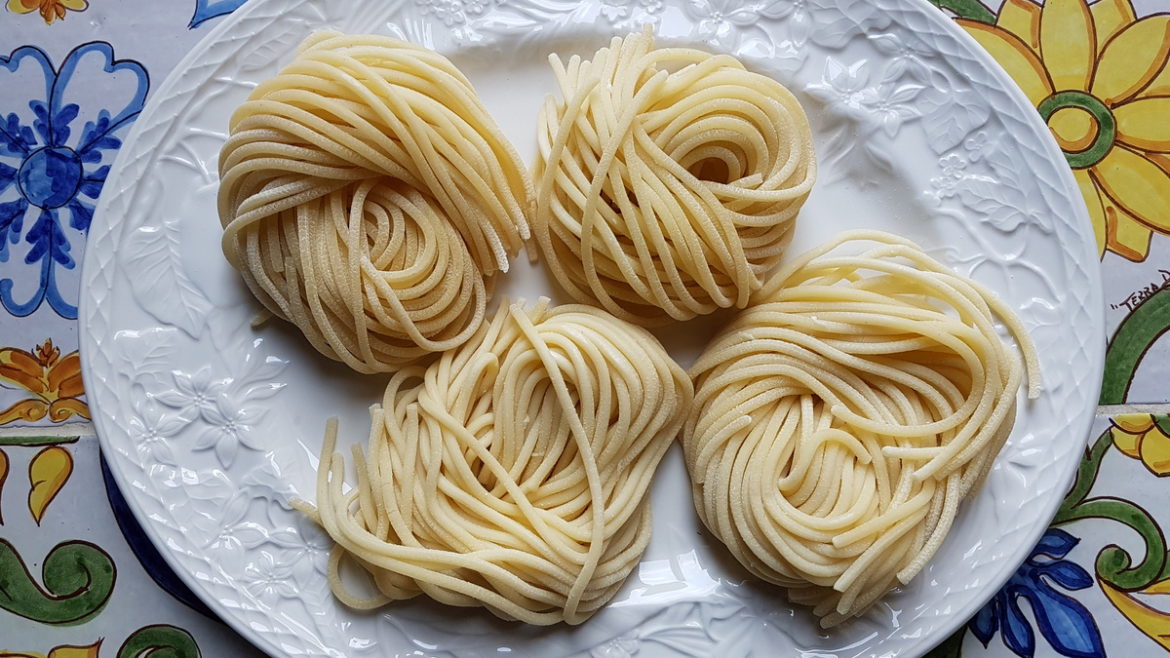 The most common feature of all these pasta types is that they are typically homemade, rolled by hand and not usually available dried, although I have noticed that dried pici from Tuscany are available on Amazon. However, the best way to try them is either to make the pasta yourself or look out for them on menus when travelling in Italy. Making this type of pasta yourself isn’t difficult. As I said before it’s like playing with play doh!!

Here is a link to an Italian video on how to make umbricelli I couldn’t find a good one for lombrichelli but the only difference is in the name. To make enough pasta for 4 people you need 500g durum wheat 00flour, 250ml water and a pinch of salt! 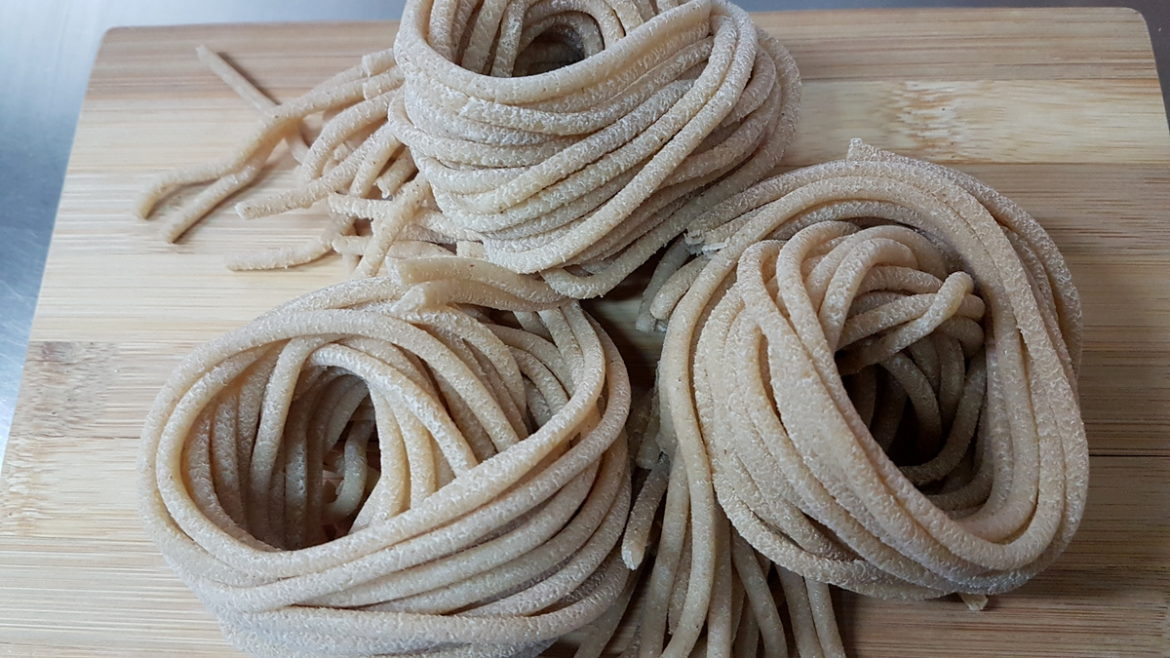 The first time I ate lombrichelli was at a fairly recent visit to a family run farm restaurant in Tuscania called Campagna Amica la bottega il Romitorio (another post coming about this restaurant). On that occasion the pasta was made with an organic durum wheat flour called Senatore Capelli, which nowadays is increasing in popularity because of its nutritional value and the fact that it is only produced organically. I ate the lombrichelli in a typical Lazio pasta dish ‘cacio e pepe’ to which zucchini flowers had been added! Needless to say it was scrumptious! 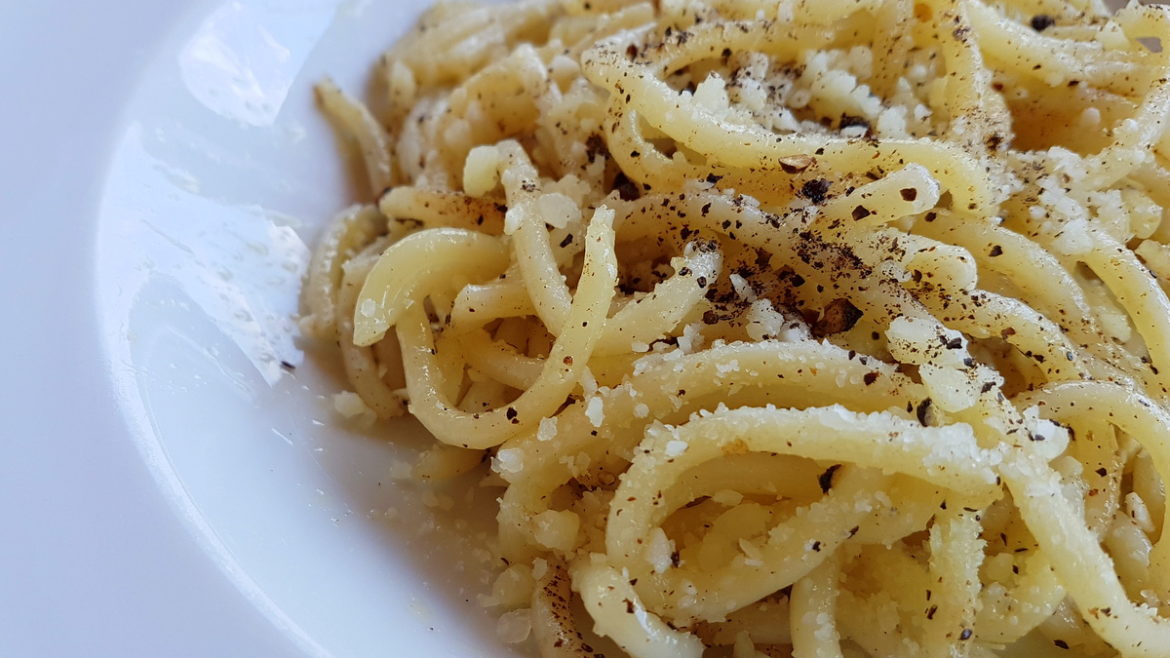 I have also cooked lombrichelli myself.  When it comes to taste, they remind me a little of Veneto bigoli, although lombrichelli are thicker. However, like bigoli, lombrichelli were and still are often served with quite heavy and/or strong tasting sauces. Since this pasta is quite robust, I assume that lighter sauces wouldn’t work with it.

In Lazio, lombrichelli are often served with ‘cacio e pepe’ as I had them, with a sausage ragu, a spicy arrabbiata tomato sauce or all’amatriciana, all wonderfully delicious combinations! In Umbria typical sauces for umbricelli are likely to be a bit different and include one with sausage and small local beans called fagiolina del Trasimeno and another, which is similar to all’amatriciana but includes marjoram called ‘al rancetto’. 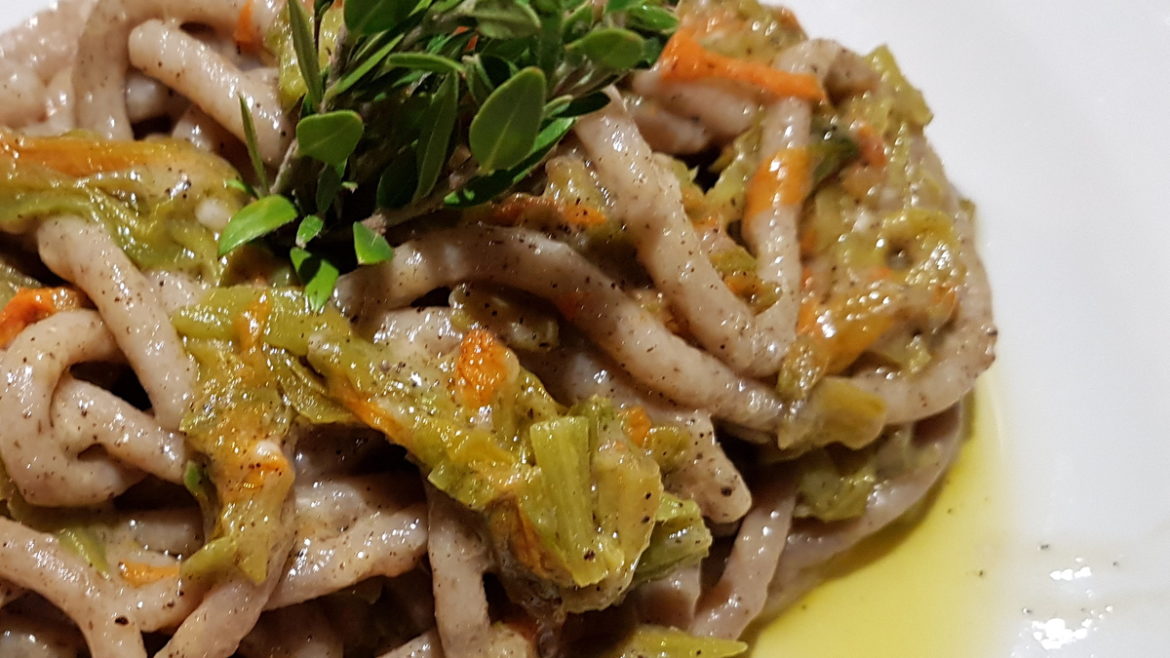