There are two very well-known spicy pasta dishes in Italy. One is pasta with nduja from Calabria, made with a soft spicy salami. The other is this vegetarian recipe called all’arrabbiata or just arrabbiata from Rome.

Although known as a Roman recipe, all’arrabbiata originated in Rieti province In fact, it actually comes from Ponte Basso, a small village that is part of the municipality of Castel Sant’Angelo, in the Rieti area. However, its popularity soon spread to the capital, and then throughout the region. Today arrabbiata is considered a classic Roman dish.

Arrabbiata is good for you!

In general, Italian food can’t be described as spicy. However, in Southern Italy especially, they love to use Italian red chilli peppers (peperoncino) in many dishes. Interestingly, the Southern Italians believe that peperoncino is not only good for your heart, but that it is also an aphrodisiac!

What does ‘arrabbiata’ mean?

The word ‘arrabbiata’ means angry! Apparently, the name derives from the fact that eating this dish may turn you red in the face because of the chilli! Just like when someone gets angry!

Arrabbiata is an as-spicy-as-you-want-to-make-it flavorful pasta dish which is very simple to put together and requires very few ingredients. It is quite a famous dish in Italian cuisine, having been immortalized by Italian films such as The Great Abducted (La grande abbuffata) by Marco Ferreri, Rome by Federico Fellini and Seven Kilos in Seven Days (7 chili in 7 giorni) with Carlo Verdone.

Although popular in restaurants in the 80s, nowadays arrabbiata is most often cooked at home. However, you can also find it in trattorias offering low cost and fast workers’ lunch menus.

Arrabbiata is very easy to make!

All you need to do to make all’arrabbiata is to fry garlic in some olive oil, add fresh chilli (peperoncino) and then peeled tomatoes cut into pieces. Season with salt and pepper and cook uncovered for about 15 minutes. Prepare the pasta, add it to the sauce and serve with a sprinkling of fresh parsley and lots of grated Roman pecorino. That’s it!

The tomatoes in arrabbiata.

The original recipe for arrabbiata calls for peeled and chopped fresh tomatoes. I altered this a bit. I decided to use fresh cherry tomatoes and some tomato passata (my favourite is Cirio passata rustica). You can also use a tin of peeled tomatoes. I would, however, suggest that you use a good Italian brand. Because this is such a simple recipe, the quality of the ingredients makes a difference to the end result.

The pasta for arrabbiata.

Traditionally, Italians eat arrabbiata with penne pasta but many people also serve it with spaghetti or bucatini. I used bucatini from a company in Molise that makes very nice pasta with 100% Italian wheat. Called, La Molisana, this pasta maker is one of the top ten ‘supermarket’ pasta brands in Italy.

In Rome, throughout Lazio and in other regions, Italians use arrabbiata sauce not only to season pasta but also to flavor dishes, such as lamb, chicken or other meats, as well as pizza or focaccia and even seafood. So, if you make extra sauce, you can use it for a second meal.

If you do try this all’arrabbiata pasta recipe from Rome, I’d love to hear what you think. Please write a comment here on the blog or post a comment on the Pasta Project Facebook page.

This recipe was originally published in 2017 but has been updated.

Other recipes from Rome on The Pasta Project. 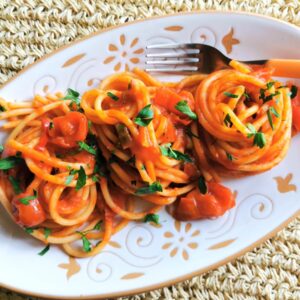 I used bucatini but penne is the most typical pasta used in this dish. Strict vegetarians will need to replace the pecorino Romano with a vegetarian cheese, as its made with animal rennet, or leave the cheese out.
Keyword arrabbiata, bucatini, peperoncino, spicy pasta