Spaghetti all’Ascolana is an easy to make olive and tuna spaghetti recipe from the Ascoli Piceno province in the Marche region of Italy. The star of this dish is the large green olives called Ascolana olives which the province is famous for. Of course, you can use other types of large green olives.

Marche (also called le Marche, meaning the marshes) is a region on the Adriatic coast in Central Italy. It’s a beautiful region with lots of hills, mountains and 170kms of coastline. Definitely a part of Italy I would love to live in! Marche is particularly special because it isn’t very touristy. Some people call it the next Tuscany, but so far most of those who have enjoyed what this region has to offer are Italians.

Like all Italian regions, Le Marche is famous for particular produce and products. There are types of pasta only made there, like maccheroncini di Campofilone or eggless tagliolini known as hairy tagliolini (tajuli pelusi in the the local dialect). There are also wines and types of cheese, prosciutto, other salumi, legumes and potatoes specific to the region.

However, the most widely known produce from this part of Italy has to be the green olives from Ascoli Piceno. Known as Ascolana olives this olive cultivar is grown in Marche and Tuscany. Apparently, you can also find it in California, where they cultivate it for olive oil!

The most famous dish the Marchigiani make with Ascolana olives is an appetizer of stuffed and deep-fried olives known as olive all’ascolana. The stuffing is usually meat and was originally meat leftover from parties and celebrations! Interestingly, this appetizer was invented around 1800 and American food writer, Mimi Sheraton, featured it in her 2015 book 1,000 foods to eat before you die!

Of course, deep fried isn’t the only way locals use Ascolana olives. They add them to other vegetables in side dishes, they add them to a type of focaccia called ‘il chichiripieno’ and to a soup made with chickling vetch (cicerchia). Plus of course these olives are used in meat dishes and in pasta sauces. The most well known of the latter is this olive and tuna spaghetti.

A recipe for days of abstinence and midnight!

Italians often refer to recipes like this spaghetti all’Ascolana as a ‘piatto di magro’, meaning lean dish. Lean dishes are those that they eat on days of abstinence like during Lent or on Christmas Eve. In fact, there’s even a category of recipes referred to as ‘la cucina di magro’. These dishes are mostly all meatless except for the use of capons to make broth.

When fasting for Lent, Italians mostly eat dried fish like baccala, canned tuna or anchovies, lots of soups with legumes and pulses and plenty of pasta dishes. One of the most famous of the latter is spaghetti alla colatura di alici (with Italian fish sauce).

When researching versions of this olive and tuna spaghetti, I also came across the expression ‘spaghetti di mezzanotte’ meaning midnight spaghetti. As I am sure you can imagine, this refers to spaghetti recipes that can be whipped up quickly when hunger strikes at midnight.

Our spaghetti di mezzanotte is usually ‘aglio, olio, peperoncino’ or ‘alla puttanesca’.  However, after making this recipe, I think it will become another contender for late night forays into the kitchen. It’s really easy to make and the ingredients are pantry staples.

Other ingredients in spaghetti all’Ascolana.

As I mentioned above this recipe is pretty simple and easy to make. Apart from the spaghetti, canned tuna and olives, all you need is tomato passata (purée), garlic, anchovies, parsley and some peperoncino (red chilli pepper) for a bit of a kick.  Leave the chilli out if you don’t like spice.

When cooking with canned tuna I often like to use oil packed tuna fillets. Like other canned tuna this can be found in jars or cans. It’s a bit more expensive than the regular stuff but I think more flavourful. Use tuna that’s been packed in olive oil not water or brine. Apparently, oil packed tuna has less sodium and you can use the oil in the can too. It’s full of nutrients from the tuna.

Traditional pasta all’Ascolana is made with spaghetti or bucatini. However, I’ve seen recipes with ziti and penne as well. I used spaghetti from one of my favourite organic pasta makers, Mancini. This company is located in Marche, so I felt their spaghetti was a perfect combo for this Marchigiano recipe.

The spaghetti was made from Turanicum wheat, so it’s a bit darker than traditional spaghetti. Although it lightens up in colour when cooked. Turanicum wheat is an organic heritage grain that’s popular in Middle Eastern and Central Asian countries, where its called Khorasan. It’s lower in gluten than the normal pasta wheat but not gluten free. However, it’s rich in many essential nutrients including protein, dietary fibre and several B vitamins. It has a slightly nutty flavour which I really like!

You can find out more about pasta Mancini in my post abut my visit to them.

Let me know what you think!

Whichever, kind of pasta you use for this olive and tuna spaghetti all’Ascolana, I’m sure you’ll really enjoy this easy recipe. In fact, it could well become one of your midnight spaghettis too!

Why not save this recipe for later?

If you want to save this olive and tuna spaghetti recipe for later, you can print it, bookmark this page or save it to Pinterest. 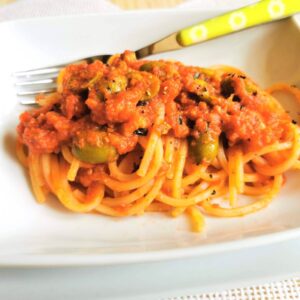 Spaghetti all’Ascolana is a fast and easy to make olive and tuna spaghetti recipe from the Ascoli Piceno province in the Marche region of Italy. The star of this dish is large green olives called Ascolana olives which the province is famous for. Of course, you can use other types of green olives. Perfect for weeknights and family meals. Can be ready in 30 minutes!
5 from 21 votes
Print Recipe Save Recipe Saved!
Prep Time 5 mins
Cook Time 25 mins
Course Main Course
Cuisine Central Italy, Italian, Marche, Mediterranean
Servings 4
Calories 688 kcal

Cook the pasta and finish the dish

Some people like to cook the anchovies at the beginning with the garlic and chilli pepper. This was they tend to melt and leave a deep umani flavour without being noticeable.
Keyword all’Ascolana, authentic Italian pasta recipe, olive and tuna pasta, spaghetti recipe, tuna pasta

Other recipes with canned tuna