This super simple but yummy 3 ingredient pasta with tuna recipe from Bologna is probably the easiest Italian pasta recipe I know. However, despite its simplicity, it was recently registered as a traditional recipe from Emilia-Romagna with the Italian academy of cuisine (L’Accademia Italiana della Cucina). 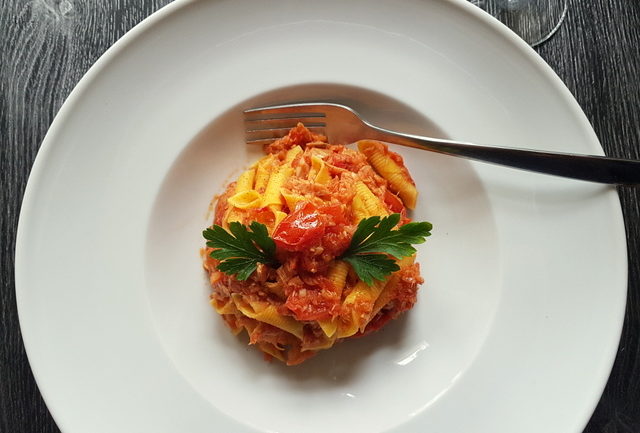 The Italian Academy of cuisine was founded in 1953 to preserve the gastronomical heritage of Italy! Before a recipe is registered with the Academy a lot of historical research is done to discover its origins and ties to the area where it is considered traditional. This research includes talking to restaurateurs and gastronomy experts. Food is a serious topic here in Italy! But, I guess rightly so as it’s such an important part of the country’s culture and traditions! 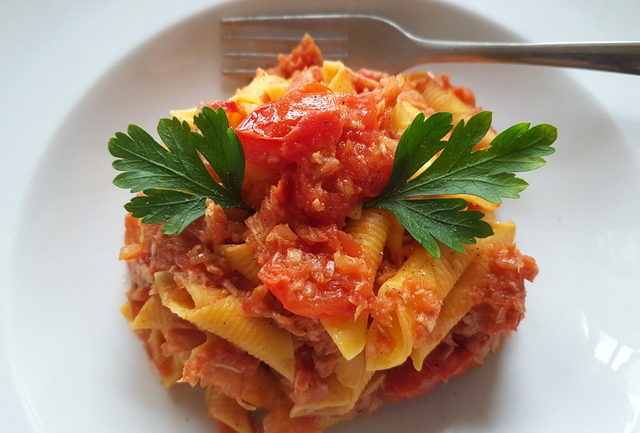 Pasta with tuna alla Bolognese is a classic fast pasta dish made with canned tuna, tomatoes and onion. Interestingly, although some Italians think of it as ‘fast food’ for lazy singles, it actually became a traditional Bolognese dish as a result of historical events and post war changes in the Italian diet. 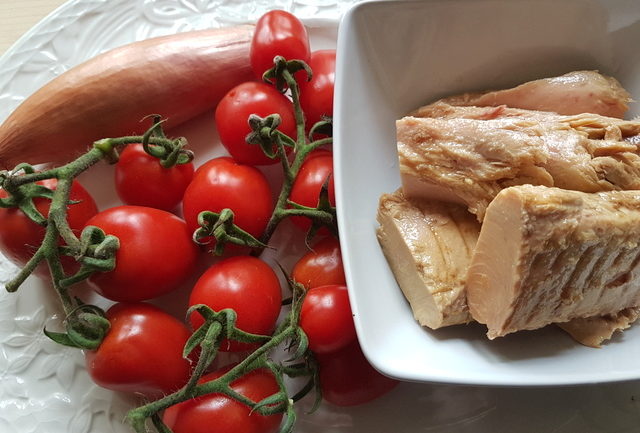 At this point I should mention that the traditional pasta for tuna alla Bolognese is spaghetti. In fact, in Bologna, this is spaghetti bolognese! The famous dish with meat sauce is known locally as pasta ‘al ragu’ and is made with tagliatelle not spaghetti! 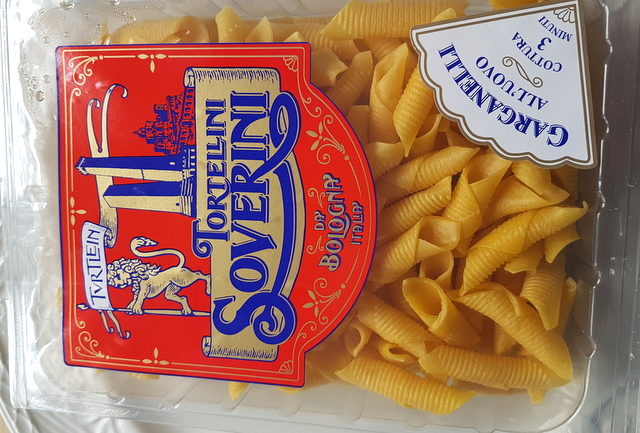 In this recipe, I used garganelli pasta, also a traditional food product from Bologna registered at the Italian Academy of Cuisine! You can read more about this pasta on my garganelli pasta post. This short egg pasta is often eaten with meat ragu in Emilia-Romagna, so I thought it would go really well with tuna alla Bolognese! I bought fresh garganelli and it was delicious. But, of course, you can use spaghetti or other pasta of your choice! 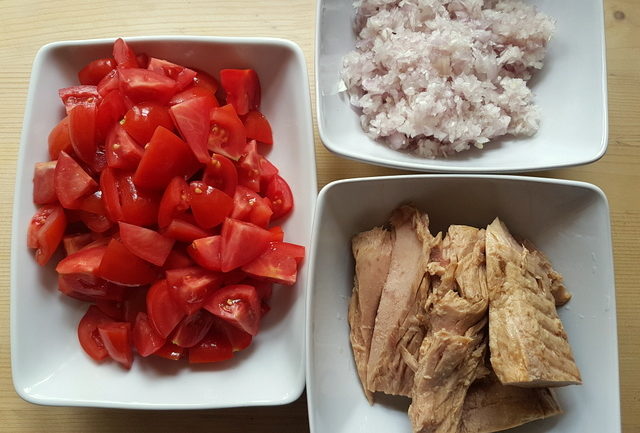 Apparently the first use of pasta with tuna in Emilia-Romagna dates back to the early post-war period. At that time, two fundamental things happened. Firstly, the spread and use of dried pasta, particularly spaghetti, in Northern Italy. Secondly, the marketing of tuna in oil as a result of the birth of a local canned tuna industry. 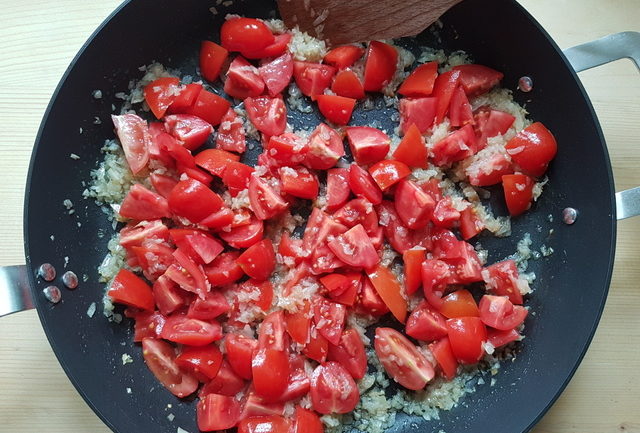 Both canned tuna and spaghetti were inexpensive, and combining them became an alternative recipe for what Italian call ‘lean days’ (giorni di magro). These are religious days of fasting, such as Good Friday or Christmas Eve, which call for abstinence from meat. In fact, for the less wealthy classes in Bologna, spaghetti with tuna Bolognese became a special dish reserved for Christmas Eve dinner. 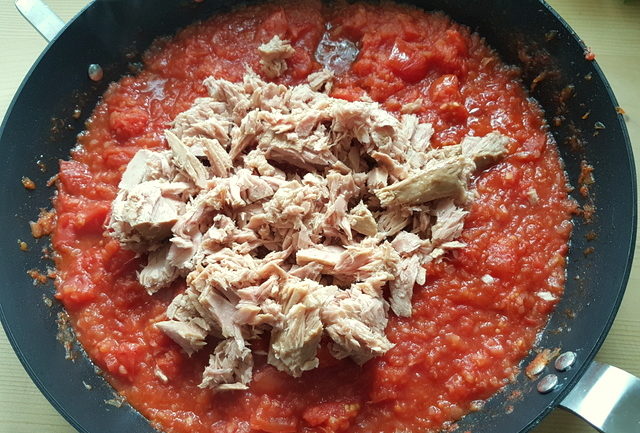 Other versions of pasta with tuna.

When I made this garganelli with tuna Bolognese, my Sicilian hubby wanted to add other ingredients such as olives and capers! After all, pasta with tuna is made in other Italian regions too, especially in the South. But, this is the official version from Bologna! The ingredients are typical of Bolognese eating habits! So no garlic, olives or capers! The only exceptions allowed are the addition of anchovies or parsley sprinkled at the end of the preparation of the dish. 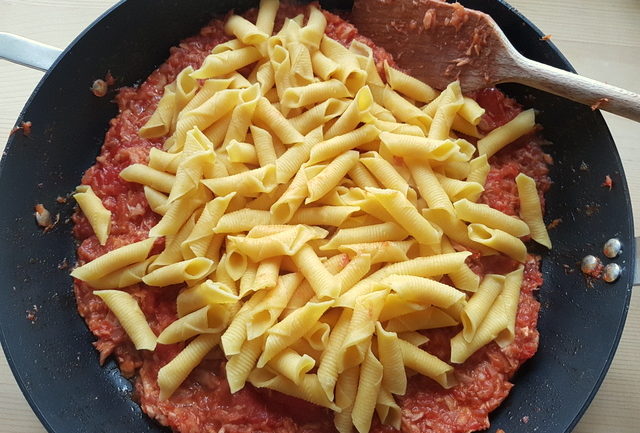 I think, garganelli pasta with tuna Bolognese is a dish that’s so great for ‘lazy’ days when you don’t feel like spending time in the kitchen. It’s also very popular with kids. The 3 main ingredients are staples in most people’s larders. You can use fresh or tinned peeled tomatoes. Italians use tuna that is preserved in olive oil. That’s definitely best. I like to use the slightly more expensive tuna fillets. Like all simple recipes the better the quality of the ingredients, the better it tastes! Don’t you agree? 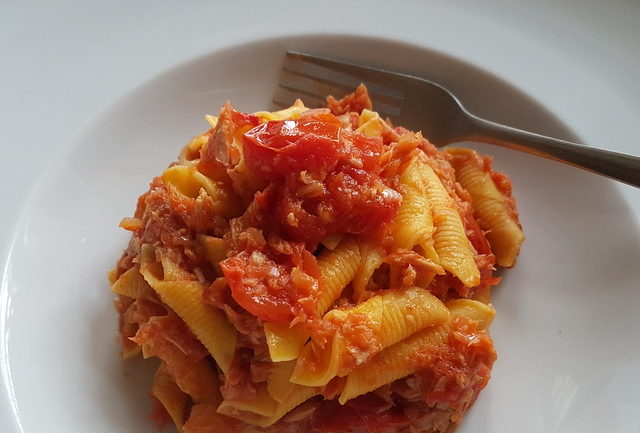 If you do try this garganelli pasta with tuna Bolognese recipe, I’d love to hear what you think. Please write a comment here on the blog or post a comment on the Pasta Project Facebook page.

Other canned tuna pasta recipes on The Pasta Project 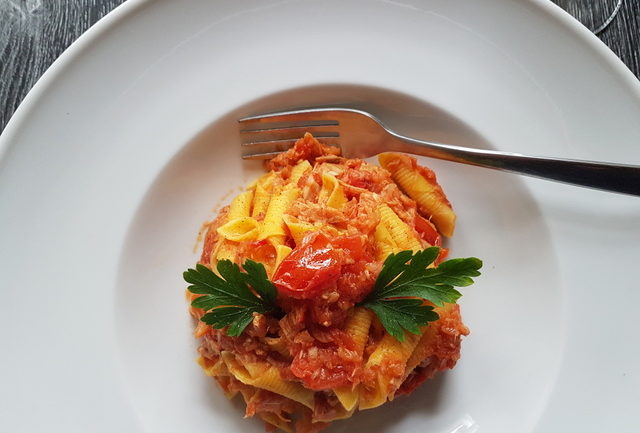 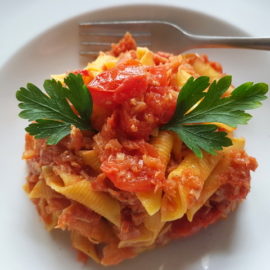 Jacqueline De Bono
This simple but delicious 3 ingredient pasta with canned tuna and tomatoes is a traditional recipe from Bologna that is perfect for meatless days and when you don't feel like too many hours in the kitchen!
5 from 29 votes
Print Recipe Save Recipe Saved!
Prep Time 5 mins
Cook Time 35 mins
Total Time 40 mins
Course Main Course
Cuisine Emilia-Romagna, Italian, Northern Italy
Servings 4

This recipe is traditionally made with spaghetti. You can also use other pasta of your choice. If you like them add some anchovies when cooking the onions for extra umami flavour.
Keyword garganelli, Italian recipe, pasta, quick and easy recipe, spaghetti, tomato sauce, tuna 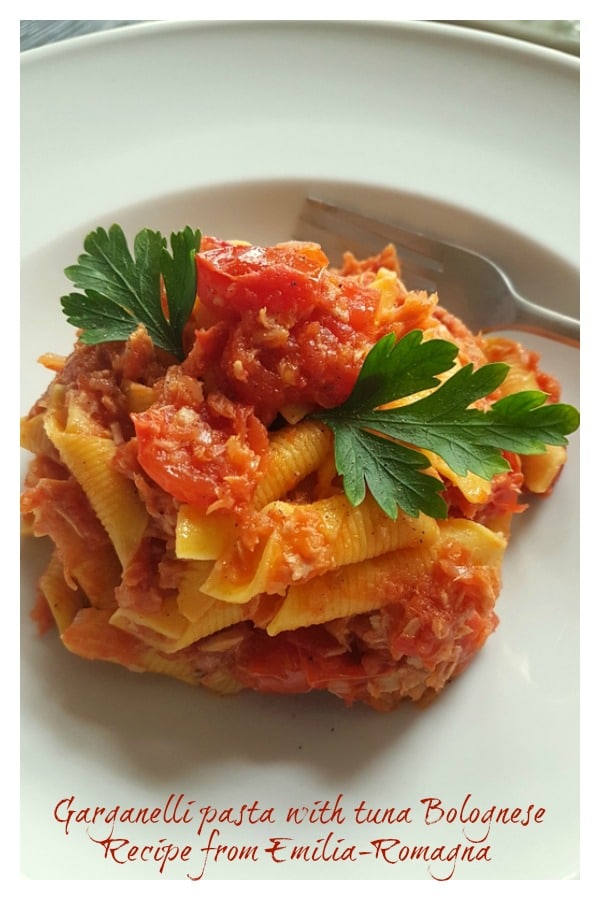