An authentic ziti recipe from Naples.

This Neapolitan recipe for ziti pasta with Italian lardo is another recipe that originated in what the Italians call  ‘la cucina povera’ (the kitchen of the poor) Today, these dishes not only continue to be an important part of traditional regional cooking but are sought after and served in even the best restaurants! The main ingredient of this recipe, lardo, has become a much appreciated gourmet delicacy.

What is Italian lardo?

In the past, rural traditions and necessity made it important for the peasant and farming populations not to waste anything. Families who had pigs would slaughter them in the late summer/early autumn and preserve every part of the animal to see the family through the cold winter months. In fact, there is a well-known Italian expression ‘del maiale non si butta via niente’ – one throws nothing away from the pig!

Throwing nothing away also meant making use of the pig fat or lard. There are two kinds of Italian lard; lardo and strutto. The latter is rendered pig fat which was, and still is, used for cooking (instead of oil) and making pastry (instead of butter).

Lardo, on the other hand, is pig back fat which has been cured in various ways. Italians eat it on bread or add it to recipes such as this one for ziti pasta with Italian lardo, known in Campania as ‘ziti lardiati’.

Families used to make their own lardo.

In the old days, farming and peasant families made their own lardo by preserving the back fat in salt. This lardo was very useful because it is very calorific and, therefore, helped the farmers get the calories they needed for all the physical work they did in the fields. By storing the lardo in salt, people could use it at all times of the year. But, it was especially popular in the winter.

Obviously this tradition is less common now. However, there are types of lardo which continue to be produced and are much loved here and even considered a delicacy.

The best lardo in Italy.

The two most famous types of lardo are Lardo di Colonnata and Lardo di Arnad. The first type has been made almost the same way since Roman times. It comes from the small village of Colonnata near the Carrara marble quarries in Tuscany. It was originally said to have been food for the quarry men.

Amazingly, the pork back fat is preserved in Carrara marble basins called ‘conche’. Carrara is the marble Michelangelo used to make his statue of  ‘David’! It has also been used in many other famous works of art and buildings all over the world since Roman times.

To make lardo di Colonnata, the producers put a trimmed piece of pork back fat into the bottom of a marble basin after the basin has been rubbed with garlic. The meat isn’t refrigerated before curing. They then add salt, black pepper, rosemary, and garlic. Some also add sage, star anise, oregano, coriander, or even cinnamon, cloves or nutmeg. The basins are filled with layers of the lard and then the salt, herbs and spices. Then they are closed with a slab of marble.

Aging occurs naturally in caves.  It takes a minimum of 6 months. During this time they regularly measure the amount of liquid released by the salt-covered lard. Once it’s ready, the lardo is very white, soft, fragrant, and extraordinarily sweet despite the large amount of salt used. The production of Lardo di Colonnata is regulated by IGP standards, which include aging the meat in marble. I used this lardo for my ziti lardiati.

Lardo di Arnad comes from the village of Arnad in the Aosta valley and is made in a different way. This lardo is aged in wooden tanks called ‘doils’ for a period of at least three months. It is flavored with a mixture of aromas composed of juniper, bay leaves, nutmeg, sage and rosemary.

The back fat has to come from a pig with a minimum weight of 160 kg and aged no less than 9 months. In addition, the animal has to be bred in Val D’Aosta or in four other regions: Emilia Romagna, Piedmont, Lombardy and Veneto. Since 1996, lardo di Arnad is the only lard in Europe that can boast the DOP (Protected Designation of Origin) certification.

The other ingredients for pasta with Italian lardo.

The original Neapolitan name for this pasta with Italian lardo recipe is ‘maccaruncielli lardiati’. Nowadays, most Italians call it ziti lardiati. Traditionally, it is made with ziti or zitoni (large ziti) or Neapolitan maccheroni. Like many other traditional dishes, there are some variations. Some people use only garlic or only onion, others use both.

In addition, there are ‘white’ versions meaning without tomatoes. However, apart from the lardo itself, tomatoes (whether fresh or as passata) are used in most recipes for this dish. My only deviation from the most common recipes was to use parsley. I didn’t have any fresh basil, but basil is usually the preferred herb.

This is a pretty simple recipe with only a few ingredients, but it’s unbelievably tasty. If you can’t find lardo, you can use pancetta or, even better, guanciale (pigs cheek). Of course, it won’t be quite the same. The lardo literally melts and adds a different flavour to what you would get with pancetta or guanciale.

Where to buy Italian lardo.

I have read that lardo is available to buy online or at Italian specialty shops in both UK and USA. So, if you’d like to try it, do get some. For UK readers, there’s a company in Cornwall making Cornish lardo.

Although lardo is made from fat, it isn’t greasy and has less saturated fat than butter! You can use it in this pasta with Italian lardo recipe as well as cut it thinly and eat it on warm bread! Yum!

If you make this ziti lardiati recipe, I’d love to hear how it turns out and if you liked it. So, please leave a comment here on the blog or on The Pasta Project Facebook page.

(This recipe was first published in 2018 but has been updated)

Other ziti recipes on The Pasta Project. 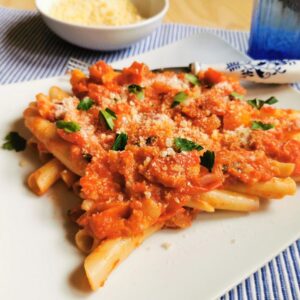 Some people add peperoncino to this dish, but I didn’t. If you don’t have ziti or zitoni you can also use other pasta tubes such as candele, penne or rigatoni. Long pasta tubes will need to be broken into pieces as is traditional in Naples. This recipe can also be made with guanciale or pancetta.
Keyword authentic Italian pasta recipe, Italian recipe, lardo, Neapolitan recipe, pig back fat, ziti

CHECK OUT MY SHOP PAGE.

If you are interested in learning how to make homemade pasta and different types of gnocchi, check out my shop page for some great video online courses from my friends in Rome! Nothing beats learning to make pasta from Italians! Plus while you’re there why not order a copy of one of my pasta recipe cookbooks or checkout some recommended pasta making tools? All great prezzies for pasta lovers!