Neapolitan baked ziti pasta al gratin with béchamel is a traditional dish from Naples, Southern Italy.  Like other baked pasta recipes, it’s popular for family meals on Sundays and holidays. However, this delicious baked pasta comes together very quickly and can easily be part of a weekly menu.

Béchamel sauce, as it’s generally called in Europe, is a white sauce made from flour, butter and milk. Today, people use it in a lot of recipes in many countries. But, as the name suggests, it is originally French (or is it?).

Louis de Béchamel was a French financier and patron of the arts who lived in Brittany in the 17th century. He also liked to dabble in the kitchen and is said to have created béchamel sauce. But, his sauce was, apparently, really just an improvement on an already existing sauce which the French used in à la crème dishes.

However, there is also a school of thought that béchamel was actually originally based on a Tuscan sauce called ‘salsa colla’ (glue sauce). This sauce was brought to France by the chefs of Catherine de Medici when she became the wife of Henry II.

Whatever the origins of the original béchamel, the French actually brought a lot of culinary traditions to Southern Italy during the Bourbon reign of the kingdom of two Sicilies (Sicily & Naples) in 1800s.  During that period the nobility in Naples and Sicily most often had French chefs who then passed on their skills and recipes to Italian cooks.

The use of French béchamel (besciamella in Italian) and the technique of cooking ‘au gratin’ are two cooking methods that have remained very popular, especially in baked pasta recipes. Funny, without the French, there would be no lasagna al forno as we know it!

The Pasta for this recipe.

In Neapolitan dialect the word ‘maccheroni’ is used to mean pasta in general, although it most often refers to long pasta tubes. For this recipe I used zitoni. These are wide long ziti. In Italy, both ziti and zitoni are traditionally long 25cm dried pasta tubes, similar to giant bucatini. However, it’s also possible to buy ready cut short ziti.

Quintessentially Neapolitan, ziti and zitoni  are THE pasta for feasts and holidays in Campania. They are usually broken into halves or pieces by hand before cooking but I decided to bake them whole. If you don’t have ziti or zitoni, you can use other pasta tubes such as rigatoni or penne for this recipe or the even longer candele!

This Neapolitan baked pasta al gratin recipe can be made even faster by using ready-made béchamel. But I prefer to make my own. It only takes ten minutes. The other sauce ingredients don’t need to be pre-cooked. I kept to a simple version with just mozzarella and ham cut into cubes.

Some versions of Neapolitan baked pasta al gratin include hard boiled eggs and/or others vegetables such as peas. The gratin for this recipe is made with a mixture of grated Parmigiano and breadcrumbs.

The combination of the golden crispy gratin and the creamy, cheesy sauce make this baked ziti al gratin a divinely delicious plate of pasta! It’s a winner with kids as well and I’m sure once you try it, it’ll become a firm family favourite. It’s also a great way to use up leftover holiday ham!

If you make this Neapolitan baked ziti pasta recipe I’d love to hear how it turns out and if you liked it. Please leave a comment here on the blog or on The Pasta Project Facebook page.

Other Italian baked pasta recipes with béchamel to try.

If you are interested in learning how to make homemade pasta and different types of gnocchi, check out my shop page for some great video online courses from my friends in Rome! Nothing beats learning to make pasta from Italians! Plus while you’re there why not order a copy of my newly published autumn/winter pasta recipes cookbook! 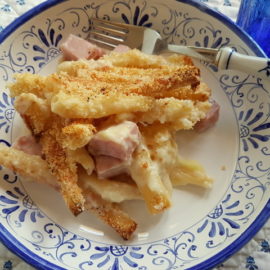 Cook the pasta and finish the dish

You can use other pasta such as rigatoni, penne or even candele to make this dish. Candele will definitely need to be broken into more manageable pieces.  If you want to make this recipe faster then ready-made béchamel can be used instead of making it yourself.
Keyword al gratin, baked pasta recipe, bechamel, ziti

This recipe was first published in 2018 but has been updated.