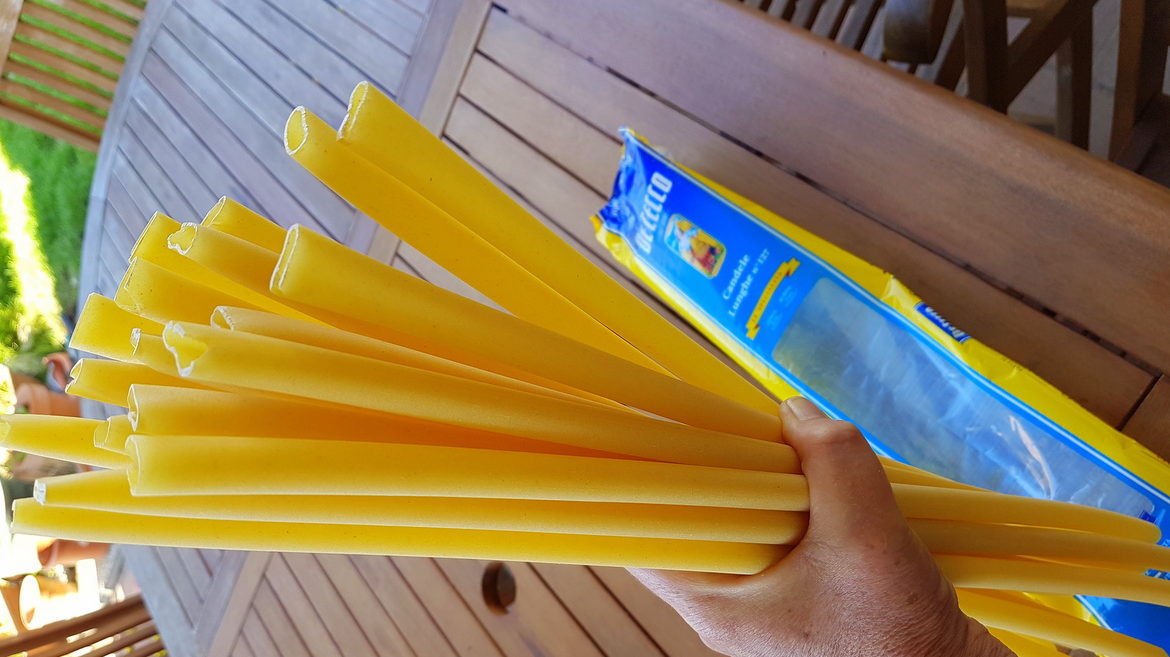 I really love doing this pasta project. It’s not just the cooking of and tasting new pasta recipes that I enjoy, but also the research. Many pasta types have an interesting history, especially those that date back in time. And I love the diversity of the Italian pasta culture. Each region really does have its own pasta gems and recipes which are often unknown abroad and, in some cases, even in other parts of the country! I particularly  love discovering new pasta shapes.

With candele, it was actually my hubby who found it and brought it home. It seems he’s enjoying this project as much as I and despite the fact that he’s Sicilian, he too is getting to eat types of pasta he’s never eaten before!

Candele are a traditional pasta of Southern Italy, especially Campania.  Pretty obviously, the word ‘candele’ means candles and this pasta appears to have been inspired by the long slim candles used in Catholic religious processions. Long being the operative word as candele are about 50cm in length!

Candele are only found as dried pasta. They are extruded through bronze dies and dried for around 70 hours at a very low temperature!! Before modern technology made cutting pasta into smaller shapes possible, tubular and long pasta such as candele and spaghetti, were left to dry in long forms and broken into smaller pieces before cooking.

Like two other similar pastas called ziti and zitoni, candele are usually broken by hand into 2 or 3 irregular pieces before being cooked. I had wanted to cook them intact but unfortunately I didn’t have an oven dish long enough to do that! (For my first candele recipe, I baked them in the sauce rather than boil them)

Even if I had wanted to boil them, I couldn’t fit them into our tallest pot. I read an article in which the writer said he had cooked the candele about a minute on one side, then rotated them and started the other side. Then slowly pushed the pieces into the water as they softened.  This took quite a bit of time and although most of the pieces didn’t break, it was apparently difficult. 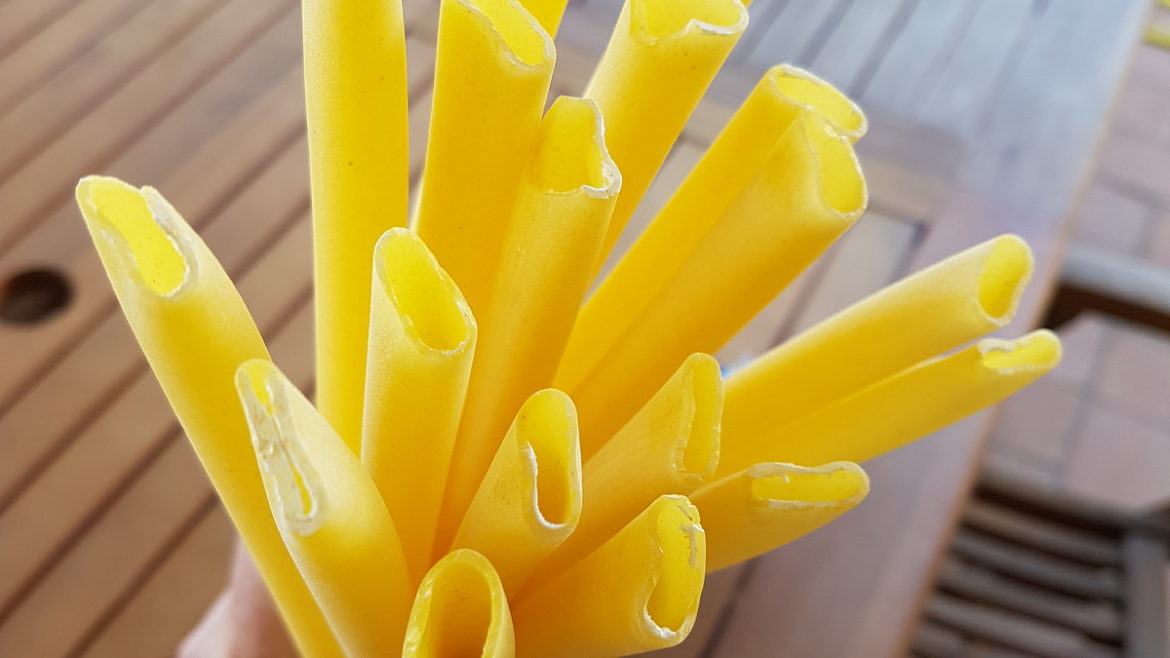 Whether cooked intact (I think only possible in the oven not boiled) or in pieces, when boiling this pasta it’s important to make sure to use a lot of salt in the water and once it’s cooked, be sure to drain very carefully. The candele can potentially store a lot of water inside each tube because they are also pretty wide.

Candele are great for making baked pasta recipes and that seems to be the normal way to cook them in Campania. They are usually boiled before baking and traditionally served with heavier sauces such as Neopolitan ragu. However, they also go well with vegetable sauces, especially with tomatoes,  olives and capers or vegetables like zucchini, aubergines and bell peppers. 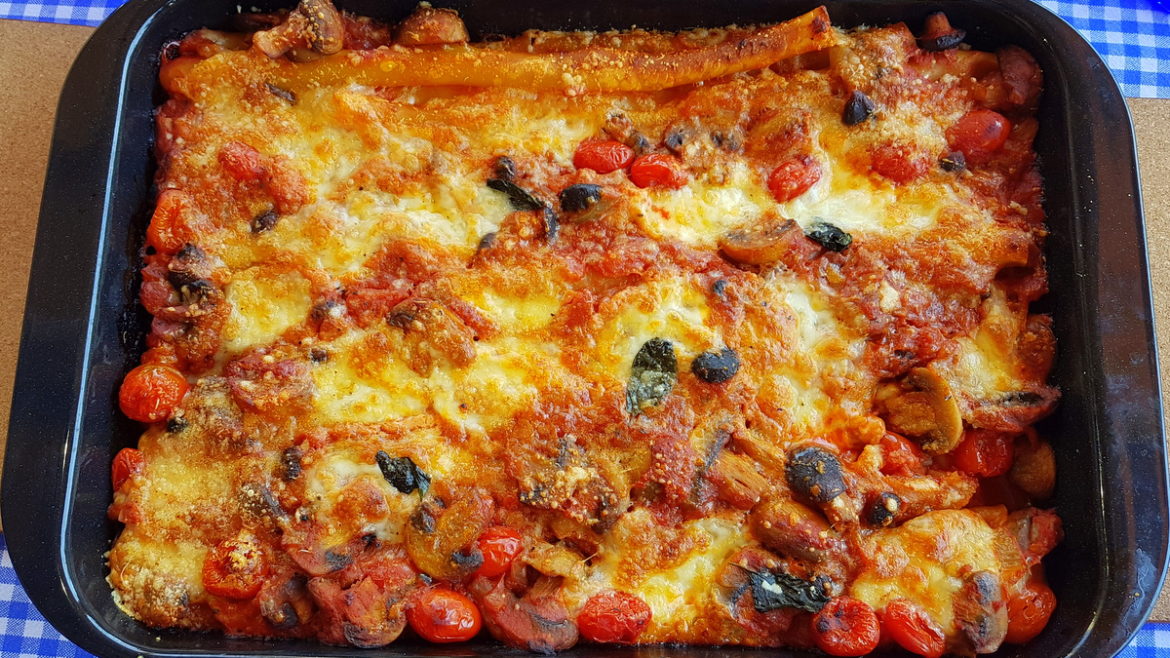 I have found a number of artisan Neopolitan pasta makers who make candele, as well as a couple of the bigger pasta producers and they can be ordered online. The ones my hubby found were from De Cecco.  My first recipe for candele is a vegetarian pasta bake because one of my guests that day was a vegetarian. The dish was scrumptious and it seems to me this pasta has a unique taste and consistency. So if you can get hold of some do give it a try! 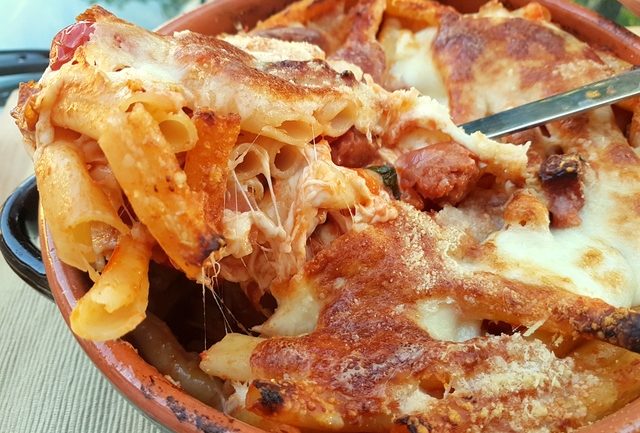