Known as ‘rabatòn’ in the local dialect, these glorious large baked spinach ricotta gnocchi come from Alessandria in Piemonte (Piedmont) in Northern Italy. Made with spinach and Swiss chard and ricotta these Italian dumplings are both luxurious and light. Traditionally baked with butter and sage, this homemade gnocchi dish is perfect as a starter for special occasions and holidays!

Traditionally made with Swiss chard and spinach or nettles and wild field herbs and greens (erbette di campo), these divine homemade gnocchi are a traditional dish from a historical area east of the city of Alessandria, known as La Fraschetta. This is where, in 1800, Napoleon fought and won the battle of Marengo against the Austrians.

La Fraschetta is an agricultural area made up of 8 small towns and villages located on what is known as the Alessandria plain. One of these villages is called Litta Parodi and it is here that rabatòn is said to have originated. In fact, every year the village holds a rabatòn festival in September.

According to some food historians, these large spinach gnocchi were originally made with ricotta and wild greens and herbs bartered for bread and other foods by herders travelling through with their cattle to the summer mountain pastures from the lowlands in the spring. Local women would then make the gnocchi by mixing eggs and bread with the ricotta and greens.

What are Italian erbette di campo?

Italy apparently has one of the richest varieties of plant life in Europe and Italians have long used foraged edible plants, known as erbette di campo, in traditional dishes and herbal medicines. Interestingly, with the advent of agriculture, many wild plants such as rocket (arugula), asparagus and fennel were and still are both cultivated and foraged.

Spring is the best season for foraging edible plants, but they don’t all grow at exactly the same time of year or in the same parts of the country. Some, like wild fennel, are more prevalent in the south and therefore used in Southern dishes. Others, like wild garlic (aglio orsino), can be found mostly in the North where the climate is more temperate.

Which greens should you use in your rabatòn?

Originally, these large baked spinach and ricotta gnocchi would have had only wild greens in them. These included wild spinach, chard, nettles, chicory and others depending on the season and availability.

Today, most Italian recipes call for either cultivated spinach or Swiss chard or both. I used both. However, some recipes I found included foraged greens. I think you can use what you have. Frozen spinach would work too. Just make sure you get as much liquid out of it as you can.

Did you know that chard, also generally known as Swiss chard, doesn’t come from Switzerland but was originally domesticated from wild beets in Sicily? Nowadays, there are many types of chard available to grow and buy. Many people love rainbow chard (which is actually just a mix of different varieties). Whatever the colour of the stems, chard can be used in much the same way as spinach or kale.

There isn’t a great difference in the flavour of different varieties of Swiss chard so you can use any type for this spinach ricotta gnocchi recipe. You can even use just Swiss chard and leave out the spinach. However, I’m not sure if the coloured stems of certain types of chard will affect the colour of the ‘green’ in these gnocchi.

I used Barese Swiss chard which has white stems. So, I used both the stems and the leaves. Apparently, originally chard had only white stems not coloured. I would suggest using just the leaves if your chard has coloured stems. You can use the latter in another recipe. You can add them to soups, bake them and even ferment them.

The ricotta for your homemade spinach gnocchi.

This recipe calls for fresh cow’s milk ricotta. In Piemonte, these gnocchi are also made with a unique ricotta called seirass. Seirass is the local dialect word for ricotta. However, unlike other types, they make this ricotta with milk not whey.

I haven’t tried seirass as it’s not available outside of Piemonte but, apparently, it is a very light, smooth, and fresh ricotta with cream in it.  They say it has a more buttery flavour than normal ricotta and is sweeter too. On my to try list!

Apart from the greens and ricotta you need eggs, breadcrumbs, parmigiano, nutmeg, parsley and marjoram for the spinach gnocchi. Plus, flour to roll them in and butter, more parmigiano and sage when you bake them.

How to make this recipe vegetarian or gluten free.

Apart from Parmigiano, this recipe is vegetarian. Italian Parmigiano is made with animal rennet and therefore not vegetarian. Use a vegetarian parmesan instead.

The only ingredients with gluten are the flour used to roll the ready gnocchi in and the breadcrumbs. You can substitute the wheat flour with a gluten free flour such as almond flour or rice flour. You only need a little.

Homemade breadcrumbs from gluten free bread are better than ready-made, store-bought GF breadcrumbs, unless the latter are plain breadcrumbs. Sometimes they are made of nuts and other ingredients which may change the flavour of your spinach gnocchi. Plus, I’m not sure how well the gnocchi will hold together without bread.

How to serve your homemade spinach ricotta gnocchi.

Traditionally, these large gnocchi are served straight from the oven with some of the melted butter from the baking dish spooned over them. They are also fantastic baked and served in individual portion dishes! Italians eat them as a ‘primo’ or first course (starter) before the main course. But, you can also serve them as a side dish.

What to do with leftovers.

Your cooked spinach gnocchi can be kept sealed in the fridge for 2-3 days and then reheated in a hot oven with a little more butter and sage, which means you can actually make and bake them a day or two in advance. You can also re-bake them in a tomato sauce in a similar way to this recipe for Tuscan spinach gnudi. Gnudi are very similar to rabatòn.

I can honestly say that rabatòn are the best spinach and ricotta gnocchi I have ever made or tasted! In fact, I’m planning to serve them at Christmas this year because not only are they so very good, but they can be made and baked the day before and then just reheated when you want to serve them without losing any deliciousness! Just a perfect dish for entertaining! 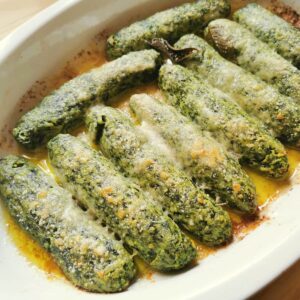 Jacqui
These luxurious homemade large spinach ricotta gnocchi from Northern Italy are just the best gnocchi ever! Perfect as a starter or a side dish you can make and bake them in advance and then reheat without losing any deliciousness!
5 from 24 votes
Print Recipe Save Recipe Saved!
Prep Time 45 mins
Cook Time 30 mins
Course Main Course, Side Dish, starter
Cuisine Italian, Mediterranean, Northern Italy, Piedmont-Piemonte
Servings 6
Calories 395 kcal

For the spinach ricotta gnocchi.

For baking the gnocchi

Cook and serve the gnocchi

Traditionally, these large gnocchi are served straight from the oven. They are also delicious baked and served in individual portion dishes! Italians eat them as a ‘primo’ or first course (starter) before the main course. But, you can also serve them as a side dish. Rabatòn can be made and baked the day before and then just reheated when you want to serve them without losing any deliciousness! You can also rebake in a tomato sauce. To make this recipe vegetarian use vegetarian parmesan instead of Italian Parmigiano. To make this recipe gluten free, use GF flour and GF plain breadcrumbs (see content for more details) Serves 6 as a starter, 4 as a main course. I got 18 gnocchi out of the ingredient quantities in this recipe.
Keyword baked gnocchi, homemade gnocchi, spinach gnocchi, spinach ricotta gnocchi

Other pasta recipes with spinach, chard or edible plants.

If you are interested in learning how to make homemade pasta and other types of gnocchi, check out my shop page for some great video online courses from my friends in Rome! Nothing beats learning to make pasta from Italians! Plus while you’re there why not order a copy of one of my pasta recipe cookbooks or checkout some recommended pasta making tools?