Sagne torte with tomato sauce and strong ricotta is a simple but delicious typical Sunday lunch recipe from Salento, Puglia in Southern Italy. The pasta is a twisted flour and water tagliatelle and the sauce usually made with fresh tomatoes or passata.

Here in Italy, there are way more types of pasta than those most people are familiar with in other countries.  In fact, there are hundreds!  A lot of pasta types started life as a regional pasta. In other words, the shape was originally invented in a particular region, or even town, from where its popularity spread.  For example, spaghetti was born in Sicily and tagliatelle in Emilia-Romagna!

Some pasta types, however, never really gained popularity outside their place of origin. Consequently, these are almost exclusively made and eaten in certain parts of Italy. Examples of this are fregola from Sardinia and busiate from Sicily.  Sagne torte, also called sagne ritorte or ‘ncannulate’ in the local dialect, is another such pasta. This traditional twisted flour and water tagliatelle is traditional in Puglia, particularly Salento.  Even though a dried version is available, it’s also mostly only available in shops in Puglia.

The first time I ate sagne torte was in Salento last summer. We had this pasta in a restaurant. There, they made it with swordfish and eggplant. Of course, it was seriously delicious. Before returning home, I bought some of this pasta to cook myself. So, this is the what I used for this sagne torte with tomato sauce recipe.

This recipe is actually the most traditional one in Salento for this type of pasta. It’s also a typical Sunday lunch dish because most people make the pasta at home themselves.  Consequently, it’s not a weekday meal, even though the sauce is pretty simple. However, it’s also popular to serve sagne torte with meatballs. In addition, I have found recipes for this pasta with mussels, horsemeat ragu and with chickpeas. All of these are typical pasta condiments in this part of Italy too.

I used fresh tomatoes and passata. You can choose to include one or the other or both, depending on what you have available. Apart from the tomatoes, this sauce has just some basil and garlic. Some recipes call for onion instead. But, my Sicilian hubby prefers garlic in his tomato sauce. You can use either. Italians rarely use both together in a simple sauce.

In Puglia, they serve this sagne torte with tomato sauce with a strong aged ricotta. Many recipes call for ricotta Marzotica. This is a typical product from the province of Lecce. It’s made at the beginning of the spring, from February to April, when the herds produce the tastiest milk thanks to the tender forage.

The name ‘Marzotica’ refers to the month during which the cheese is mainly produced. In Italian ‘marzo’ means March. Ricotta Marzotica is made with sheep, goat, cow’s milk or a mix. It’s usually cone shaped and  has a soft wrinkled rind and is quite crumbly. This is the cheese I used.

Other cheese you can use.

Another local ricotta used with this recipe is just called ‘ricotta forte’ or strong ricotta. This is typical throughout Puglia. It is made from October to May using sheep or cow’s milk. This ricotta is creamy, pale yellow in colour, with a spicy pungent flavour and a strong odour. Ricotta salata (salted ricotta) is a third cheese from Puglia (and other parts of Southern Italy) that goes well with sagne torte with tomato sauce. However, if you can’t find hard ricotta, then you can use Pecorino or even aged feta.

I used dried sagne torte that I bought in Salento. As I mentioned above, this pasta isn’t so available outside of Puglia. So, making it myself is on my to-do list. In fact, given that there’s a shortage of pasta in many places right now, I think it’s a great time to start making more homemade pasta. Lasagne sheets are the easiest to start with. Simple flour and water pasta like cavatelli are pretty easy to get the hang of as well. You can see sagne torte being made with meatballs in Puglia in the Pasta Grannies video below. I love how ‘springy’ this pasta is!

Of course, you can use other pasta types with this homemade tomato sauce. For a more authentic result, I’d go for other twisted shapes like long fusilli or busiate!  However, pasta with tomato sauce is a staple here in Italy and Italians make it with all kinds of pasta!

If you do make this sagne torte with tomato sauce and strong ricotta, I’d love to hear how it turns out. Please write a comment here on the blog or post a comment on the Pasta Project Facebook page.

Other recipes with tomato sauce. 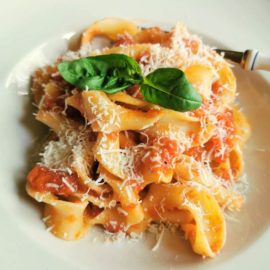 Jacqueline De Bono
Sagne torte with tomato sauce and strong ricotta is a simple but delicious typical Sunday lunch recipe from Salento, Puglia in Southern Italy. The pasta is a twisted flour and water tagliatelle and the sauce usually made with fresh tomatoes or passata. You can use other types of pasta, of course!
5 from 32 votes
Print Recipe Save Recipe Saved!
Prep Time 20 mins
Cook Time 25 mins
Course Main Course
Cuisine Italian, Mediterranean, Southern Italian
Servings 4