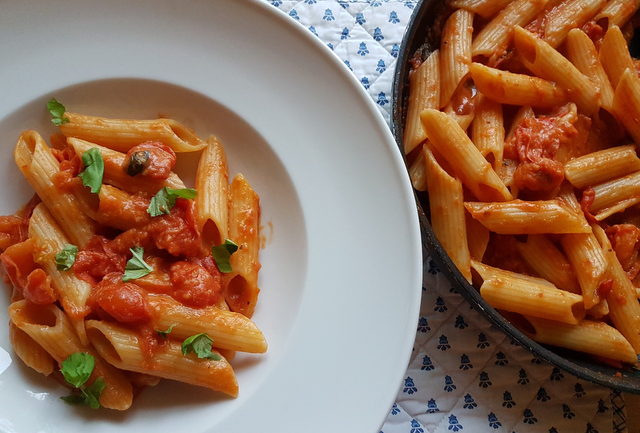 Despite the fact that Italians have been eating pasta since Roman times (or even before) the combination of pasta with tomato sauce is relatively recent in comparison. Tomatoes were actually only introduced to Europe from South America in the 16th century. However, it took a long time for people to stop thinking of tomatoes as a poisonous fruit and start eating them! In fact, the first mention of pasta with tomato sauce was in a recipe from Naples in 1800!

Once they started using tomatoes in their food, the Italians couldn’t stop and today many people think of tomatoes as being the quintessential Italian ingredient because they are used in so many typical Italian dishes. Pasta with a simple tomato sauce is probably the most common go-to quick recipe for Italian cooks, housewives and mothers. Italian kids love it! I have seen so many young children eating it in restaurants whilst their parents enjoy more sophisticated food! 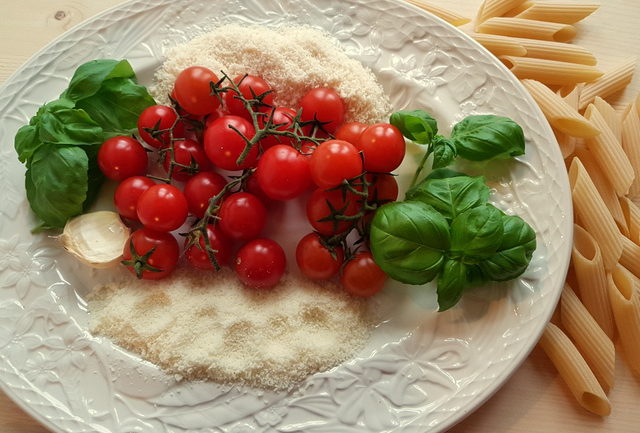 Although pasta with tomato sauce requires few ingredients, there are different versions of the recipe. Many Italians  just use tomatoes, garlic and basil. However, some add onions instead of garlic and others include onions with carrots and celery too. This Neapolitan recipe for pasta with tomato sauce is slightly different because the pasta is finished off in the sauce to which lots of grated cheese is added. 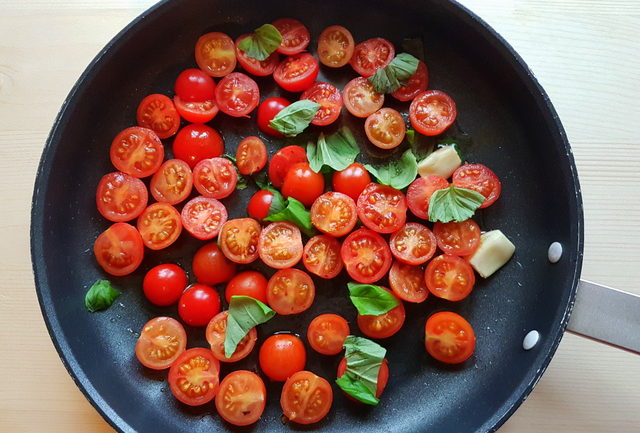 Pasta allo scarpariello is, in fact, one of the most popular and traditional dishes of Neapolitan pasta cuisine. This is a simple tomato based sauce said to have been invented in the kitchens of the Quartieri Spagnoli or Spanish quarter in Naples. This district was home to many artisan workers including shoemakers. In Neapolitan dialect, ‘allo scarpariello’ actually translates to the ‘pasta of the shoemaker or cobbler’ many of whom, food historians tell us, used to eat this dish at lunch time whilst still at their work benches. 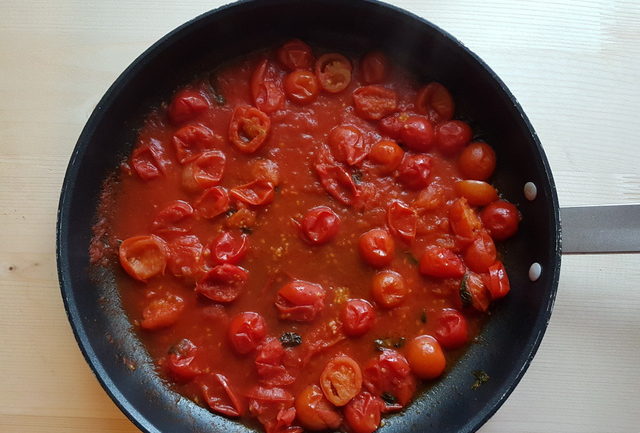 Originally, this was a sauce created to make use of the weekend’s leftover sauce. In other words, what remained of the traditional Sunday ragù to which the shoemakers (or their wives) added a lot cheese because most of the meat from the sauce would have been eaten on Sunday! Cheese served to make the sauce more filling and was something the shoemakers apparently always had plenty of because shoe repairs were often paid for in basic foodstuffs instead of money by poorer customers. 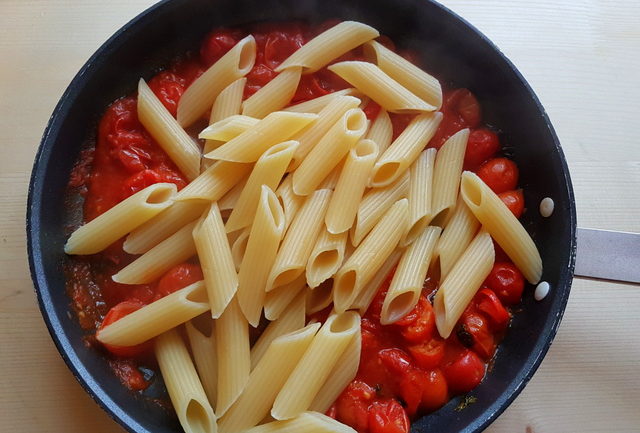 This quick and simple recipe soon became popular among Neapolitans in general and until today is still often served in homes and restaurants in Naples and throughout Campania! 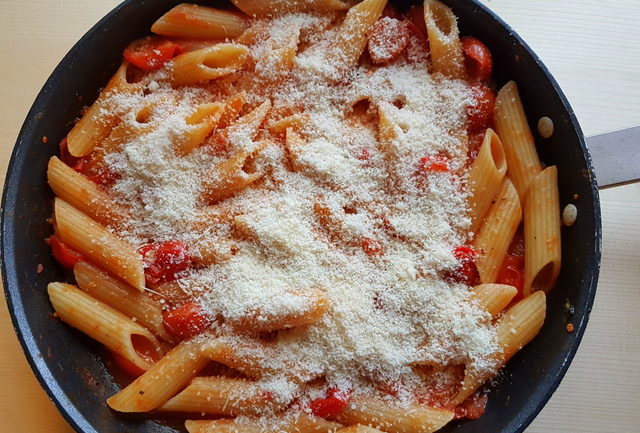 Changes to the original recipe.

However, over time, the ingredients for ‘allo scarpariello’ have changed and instead of the leftover meat sauce, fresh or preserved tomatoes are often used to make a basic tomato sauce to which lots of grated cheese and, sometimes, peperoncino is added. The original recipe also called for lard as the fat in which the sauce was cooked. But, nowadays, most people use extra virgin olive oil which, of course, is healthier. 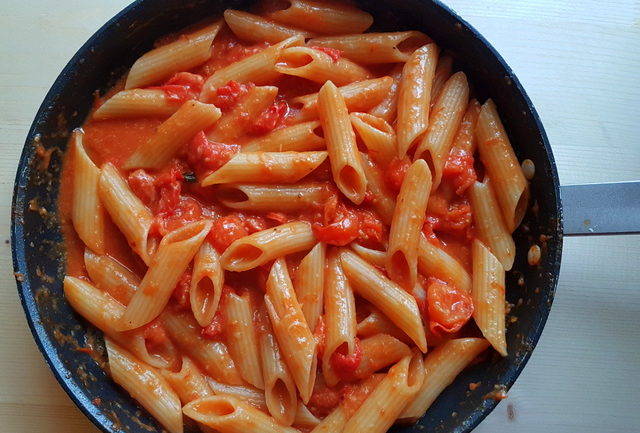 Although this is an extremely simple dish, like many other traditional recipes from what the Italians call ‘la cucina povera’ (peasant kitchen), it has also become fashionable and can be found served in even expensive sophisticated restaurants. Michelin star chef, Mario Affinita, has made it at Don Geppi di Sant’Agnello restaurant in Sorrento. His recipe includes datterini tomatoes, lard and three types of cheese. 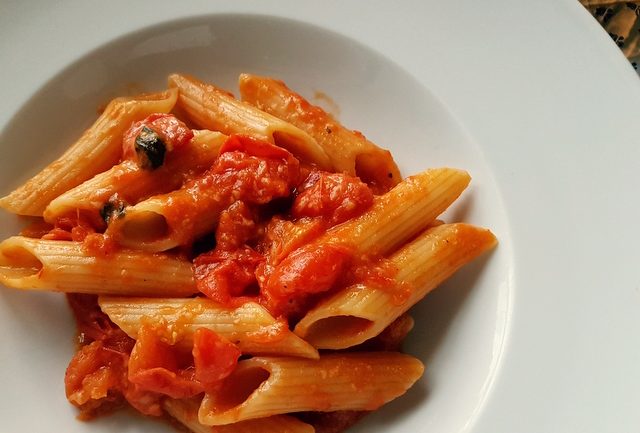 What type of pasta?

Traditionally the pasta served with allo scarpariello is either spaghetti or penne rigate. I made it with large penne rigate, also called penne zite, but lots of other types of pasta can be used. I think fusilli or long fusilli, for example, would be wonderful too!

This is a very simple recipe that takes very little time to make. However, it’s not to be under-estimated. I’m sure you will be surprised at just how delicious it is. Also, if you try it, I’d love to hear what you think. So, please feel free to message or comment here on the blog or on The Pasta Project Facebook page. I’m looking forward to hearing from you!

(go to the next page to see the recipe. Just scroll down and click 2) 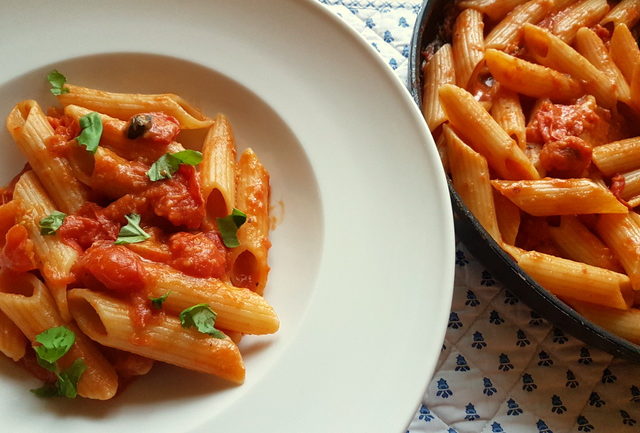