Strozzapreti with swordfish is a delicious example of how Southern Italians pair pasta with swordfish. It’s full of typical Mediterranean flavours and very easy to make! 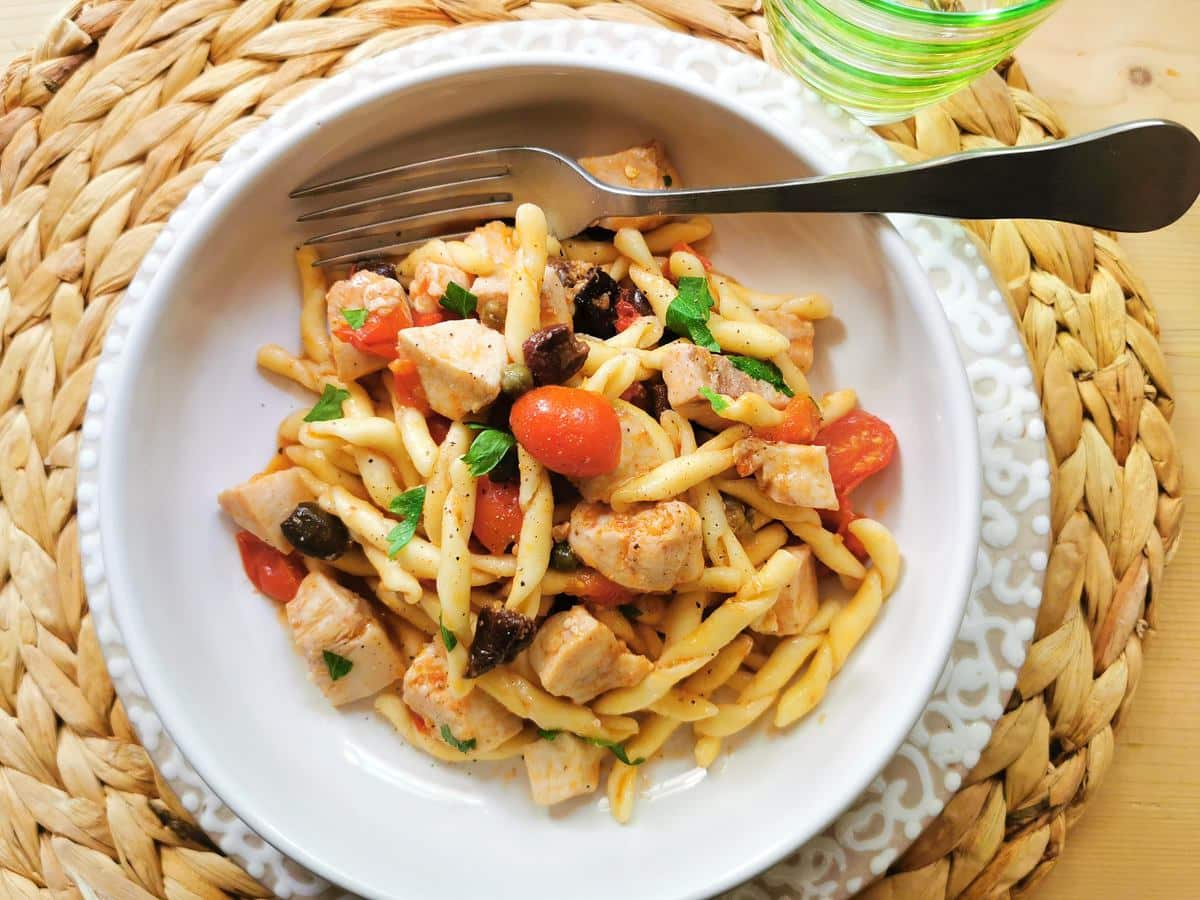 Swordfish is a very popular steak fish loved by children and adults alike. As a kid, I remember eating it a lot when on holiday in Spain. I’m talking about a fair number of years ago now, of course, which I guess is a way of saying I’m no spring chicken! 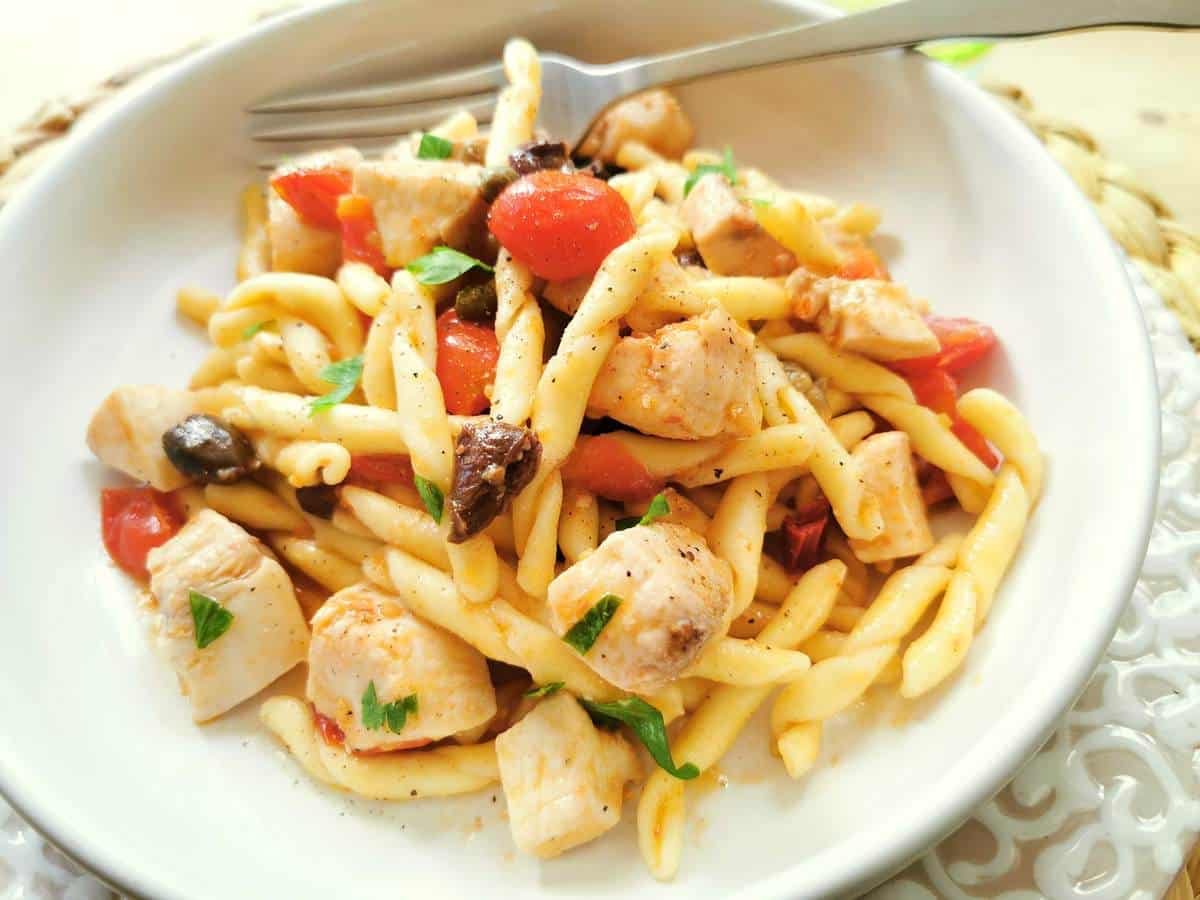 Today, you can find swordfish in supermarkets or fishmongers everywhere! But, outside of Italy, it’s most often served as a main course either fried, grilled or oven baked. However, swordfish is a fabulous fish for pasta recipes. I only started eating it with pasta after moving to Italy. In fact, since coming to live here in 2003, I’ve developed a passion for almost any kind of seafood pasta! 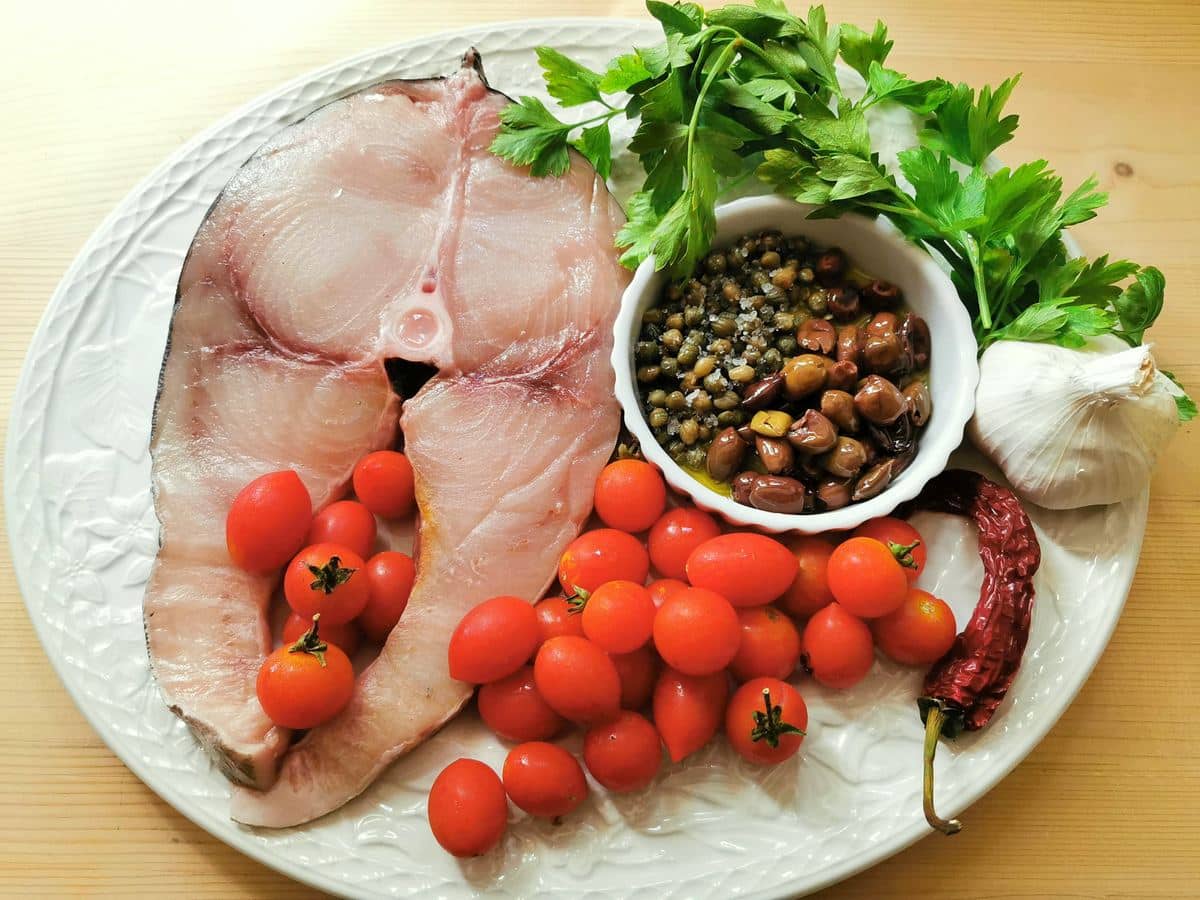 Luckily for me, my hubby is Sicilian and he loves to cook and eat seafood pasta dishes. He’s introduced me to so many wonderful dishes at home in our kitchen and whilst travelling around Italy. Most especially in Sicily, where seafood is king of the kitchen and pasta its queen! 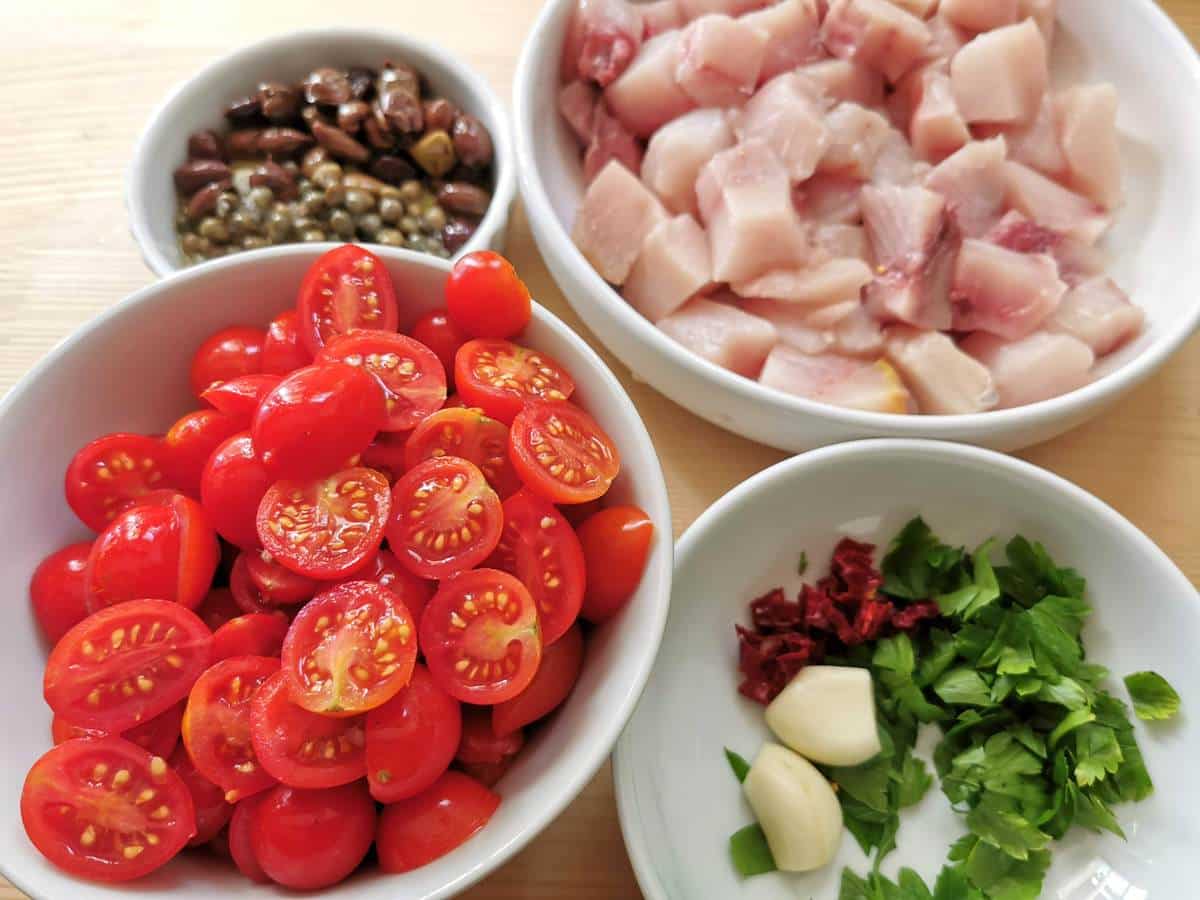 I’ll never forget our first trip to Sicily for Valentine’s 2004, when we went to eat at a trattoria in the small harbour of Acitrezza . The restaurant had a wonderful display of seafood, most of which I couldn’t put names too. It was my first time eating things like sea dates, sea urchins, venus clams, mantis shrimps, razor clams, bottarga and more. And my first time eating pasta with some of these. 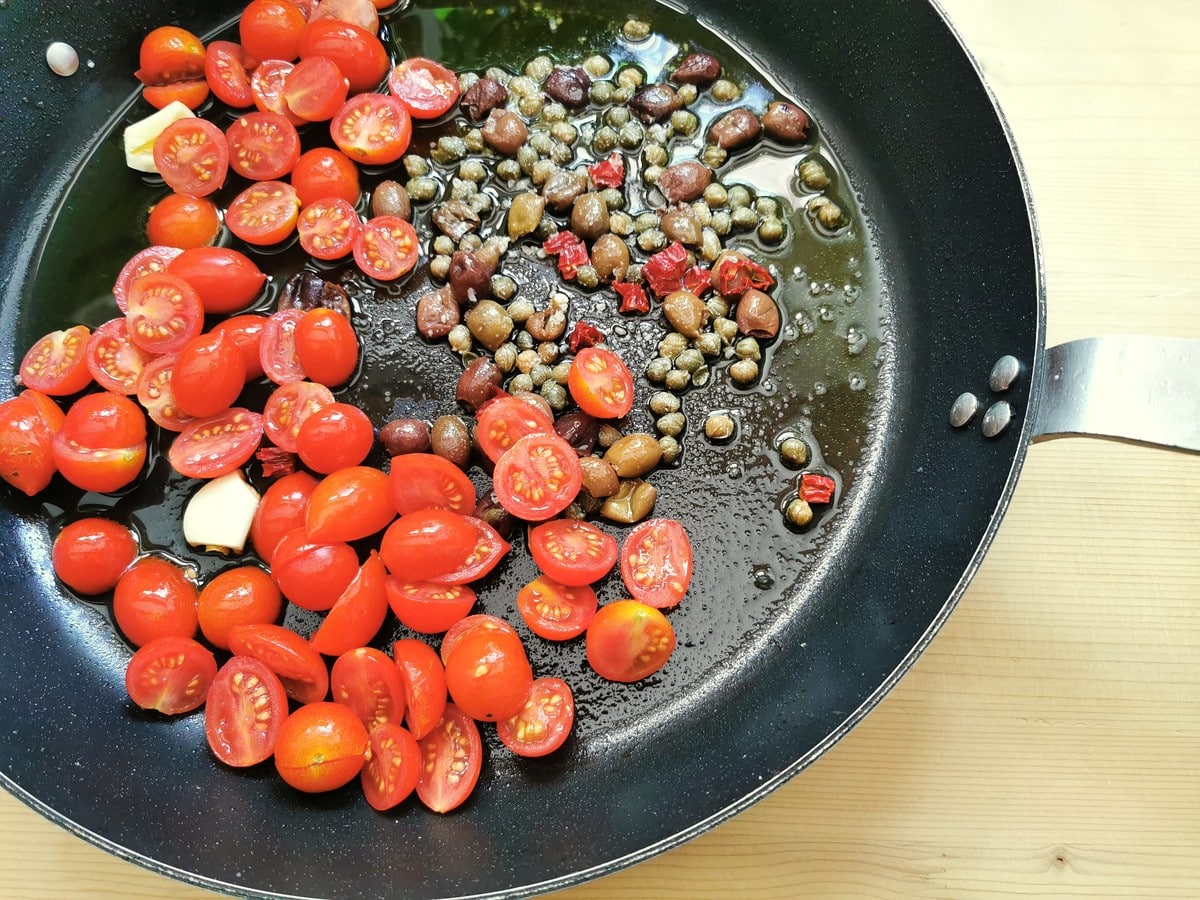 Step 2 Fry the garlic. capers and olives in olive oil and then add tomatoes.

Since that day, I’ve been hooked on the Sicilian seafood, on pasta with sea food and on my hubby too! (We weren’t married then.) The way to this woman’s heart was obviously through her stomach! 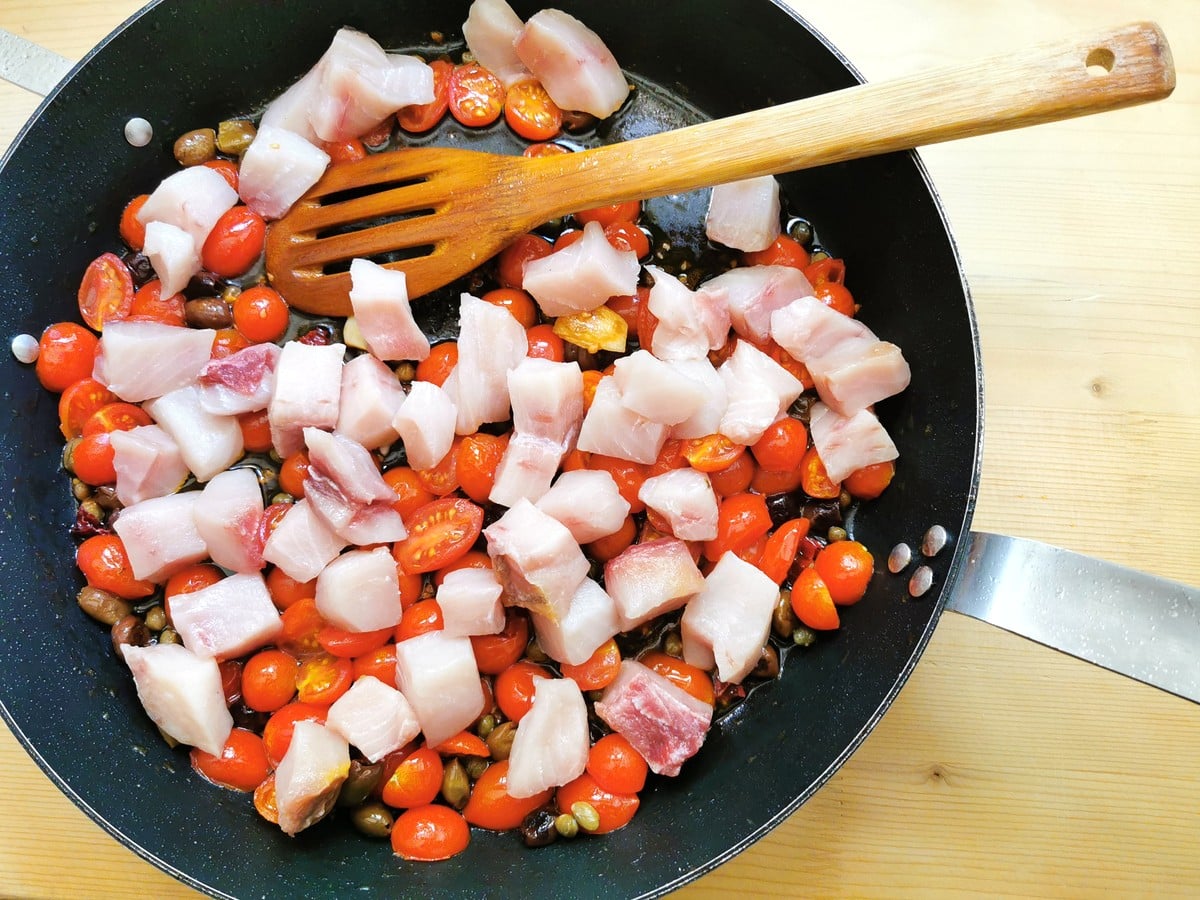 Step 3 Add the swordfish to the skillet

Enough reminiscing! Now for the subject of today’s post, Sicilian strozzapreti with swordfish! As I have mentioned in other posts, strozzapreti pasta is an elongated type of trofie, most often handmade. But, we can also buy it dried. The name ‘strozzapreti’ means priest strangler or choker. You can read how this pasta got its name on my strozzapreti post. 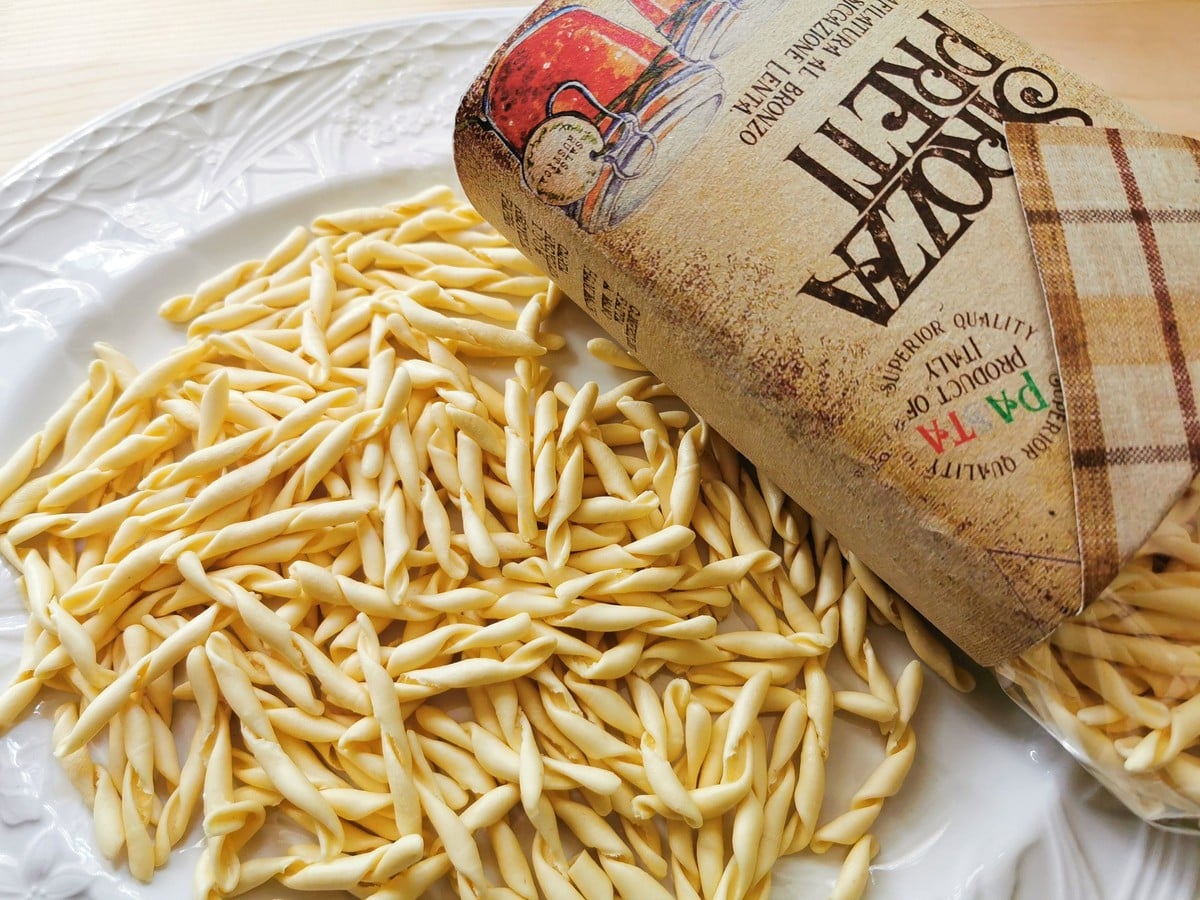 Strozzapreti pasta is very often eaten with heavier meat sauces, especially away from coastal areas. However, it’s also a popular pasta partner for richer seafood sauces like this pasta with swordfish. 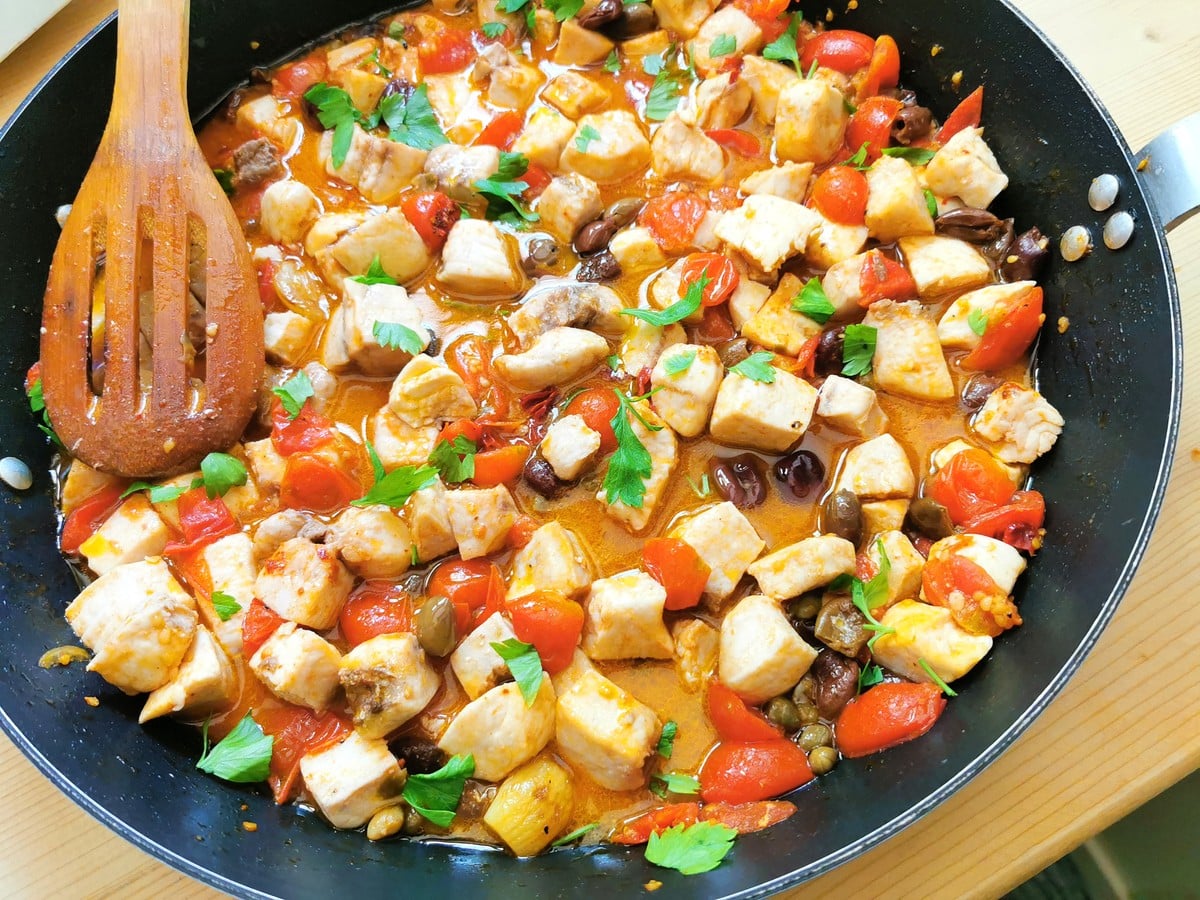 Step 4 Cook the fish and other ingredients for about 10 minutes. Then add parsley.

In Sicily, they also make a divine pasta with swordfish and eggplant and mint . However, normally the main ingredients are those typical of Central and Southern Italy; tomatoes, capers, olives, garlic, parsley and a little peperoncino for those who want theirs to have a bit of a kick! 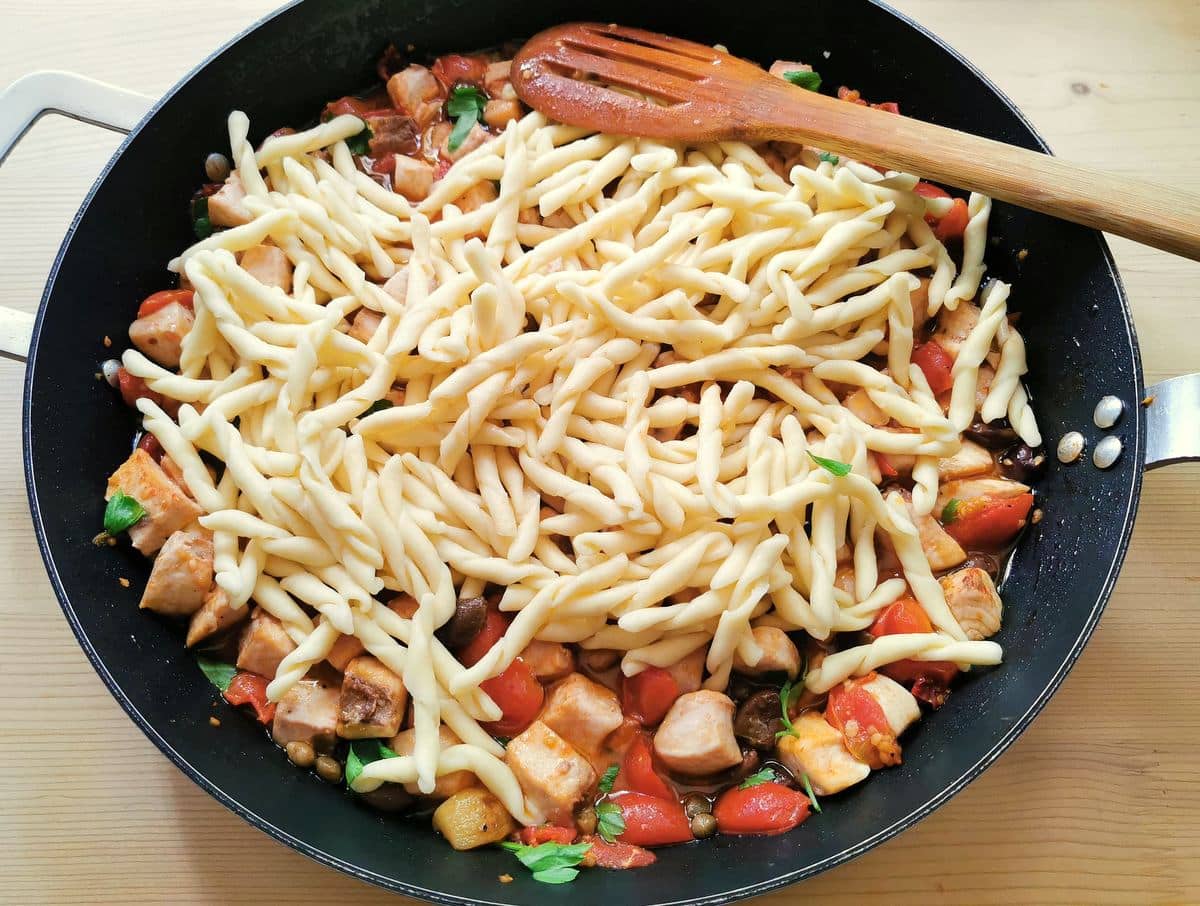 This strozzapreti with swordfish recipe can also be made with other short pasta such as casarecce, rigatoni or penne. Do try it. I’m sure you’ll love the combination and be coming back for more time and again! 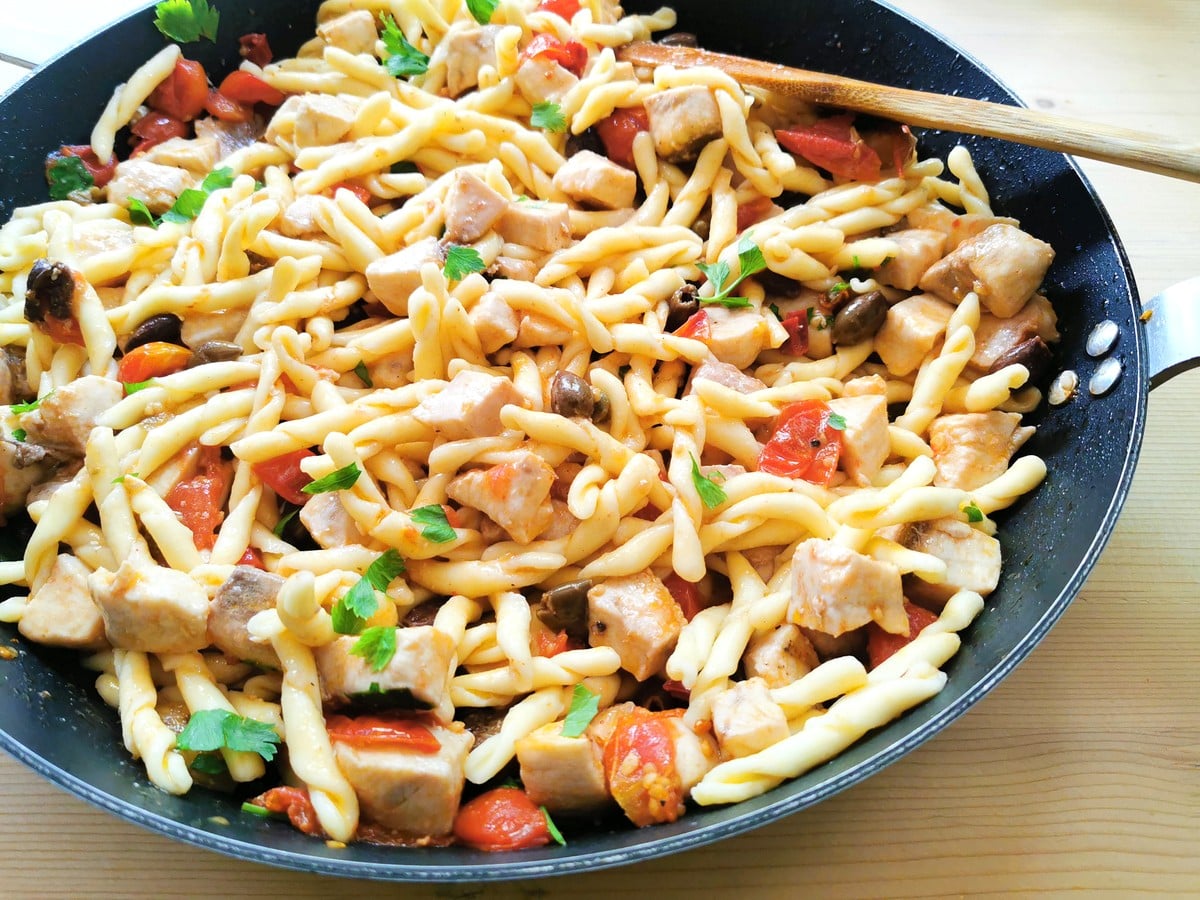 Step 6 mix the cooked pasta and swordfish sauce together.

Please do let me know if you make this pasta with swordfish dish. I’d love to hear how it turns out and if you liked it. Please leave a comment here on the blog or on The Pasta Project Facebook page. 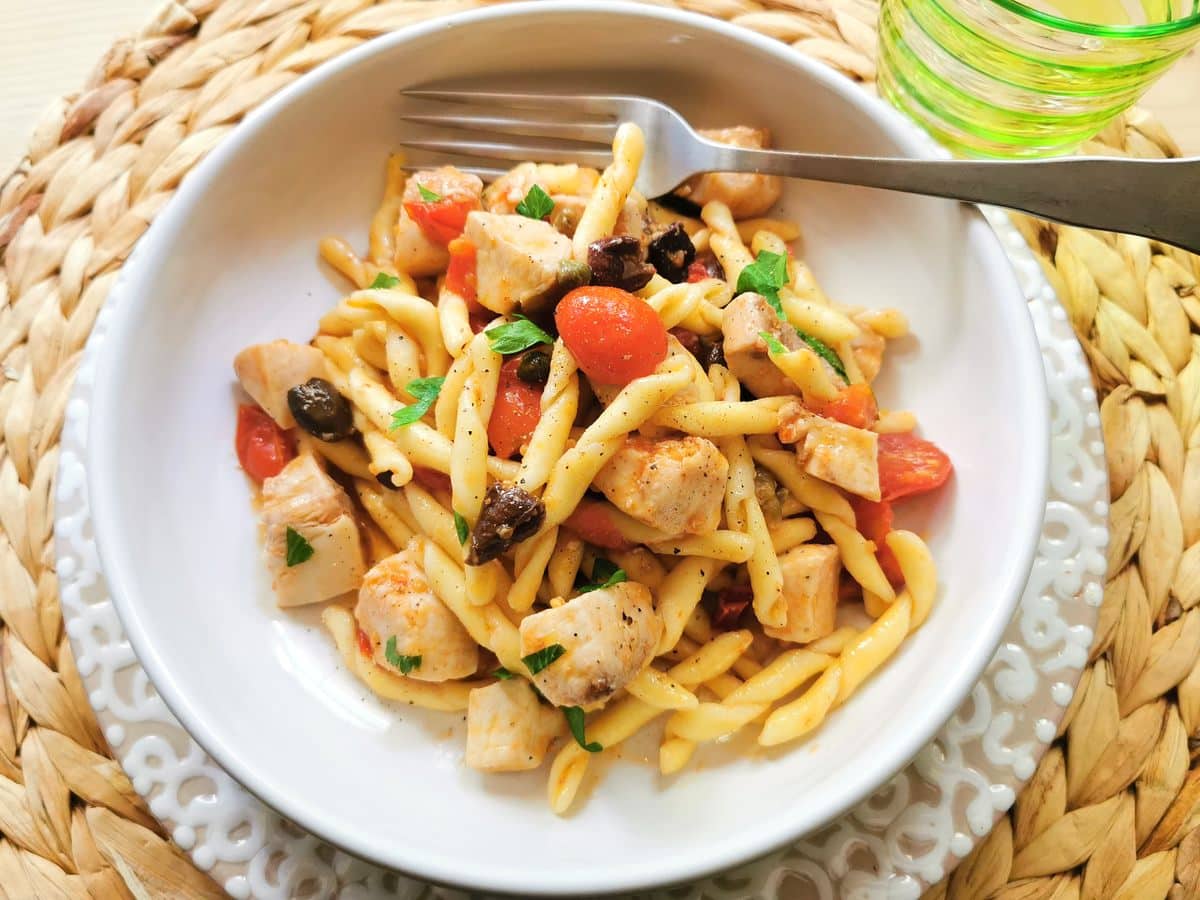 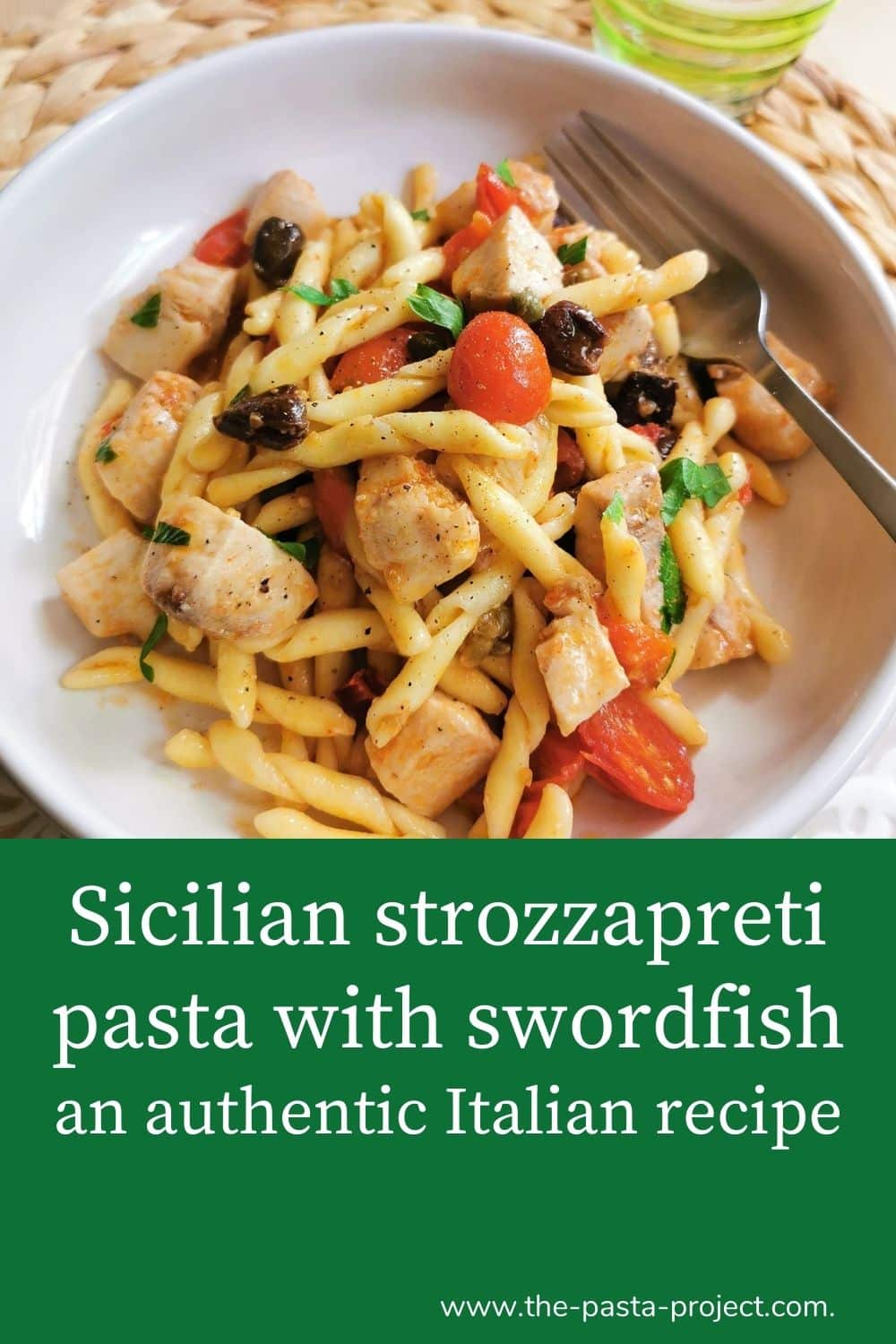 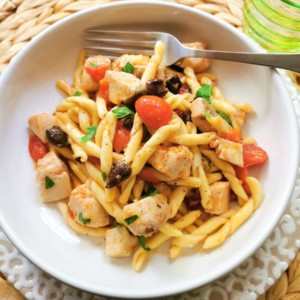 This pasta dish can be kept in the fridge for a day if you have leftovers but it’s better to serve immediately after cooking. You can also freeze it but only if the fish was fresh not frozen. Instead of strozzapreti you can use other types of short pasta such as penne, rigatoni, cavatelli etc You can use fresh or frozen swordfish for this recipe. If you can't find swordfish it's also very good with fresh tuna.
Keyword pasta, pasta recipe, seafood pasta, strozzapreti, swordfish