Having eaten it in Sicily, I had really wanted to make this typical Sicilian baccalà recipe called ‘alla ghiotta’ with pasta for a long time. I have now made it with homemade baccalà and store bought. Both times it was amazing! This spaghetti with salt cod was a big hit with my Sicilian hubby and baccalà fans are sure to love it too!

What is salt cod (baccalà)?

Salt cod known as baccalà in Italy, bacalao salado in Spain, bacalhau in Portuguese and bakalar in Croatia is dried cod fish. The process of drying cod dates back to the time of the Vikings. It’s a popular ingredient in Northern European, Mediterranean, West African, Caribbean and Brazilian cuisines.

I have long been fascinated by the fact that salted or salt cod is popular in many Mediterranean countries and has been for hundreds of years! This popularity is especially curious since these countries have their own fishing industries and catch fresh fish from their own seas. Whereas, cod is not really found in the Mediterranean!

Drying and preservation only works with fish that have very little oil and fat. Cod fish, apparently, has very low levels of oil and most is in the gut. Drying and salting enabled people to transport the fish long distances.

Back in the 1500s, salt cod was popular on ships and became a staple part of sailors’ diets. Eventually it started to be sold and eaten by people on the land as well. This is because it was cheap and could be kept for very long periods of time.

Originally, most of the cod people used to make salt cod (baccalà) in Europe came from the Grand Banks off the coast of Newfoundland. However, since the populations of cod have declined there due to overfishing and other reasons, most salt cod now comes from Norway or Iceland.

In Italy, two types of dried cod are popular, salted and air-dried. Fresh or frozen  cod fish is called merluzzo in Italian. However, salt cod is called baccalà and air-dried cod is called stoccafisso (stockfish). Stockfish is even older in origin than salt cod and was most probably invented by the Vikings and brought to Italy by the Normans.

Many Italian recipes for baccalà can also be made with stockfish and vice versa. However, stockfish is more popular in Northern Italy and baccalà more commonly used in Central Italy and the South.

Salt cod can be expensive.

Once cod was really abundant and salt cod was a popular staple in Mediterranean countries. Today, cod is less affordable and both baccalà and stockfish are quite expensive. They can cost anything between about 12 and 32 euros a kilo, depending on the quality and the source. I am not sure about Italy, but I know that in some places other types of white fish, such as pollock, haddock and whiting are marked and sold as baccalà!

Italians don’t have one typical Christmas dish. However, seafood is traditional throughout the country, especially on Christmas Eve. This is because 24th December has long been a day abstinence from meat. Although Italians don’t actually celebrate the feast of the 7 fishes like Italian-Americans, many families prepare a number of seafood dishes for the Christmas Eve table. Baccalà is almost always present at these meals, although it’s prepared in different ways from region to region.

Preparing both stockfish and baccalà is normally quite a long process. First, you have to rinse the fish to remove the surface salt. Then, you need to soak it in fresh water for up to three days. During this time, the water has to be changed 2-3 times a day! Once re-hydrated the fish can be used  for cooking.

Here in Veneto, stockfish, but also baccalà, is used to make a recipe called baccalà alla Vicentina. The fish is cooked in milk for up to 4 hours and served with polenta. In Livorno, they cook salt cod with tomatoes, garlic and basil.

In Naples, where legend says there are 365 ways to eat baccalà, they often serve it with tomato sauce flavoured with capers, olives and pine nuts. People in the Southern regions, such as Sicily and Puglia, often eat baccalà with pasta, like in this spaghetti with salt cod recipe.

Having eaten it in Sicily, I had been wanting to make this typical Sicilian baccalà recipe called ‘alla ghiotta’ with pasta for a long time. However, the first time I tried to make this spaghetti with salt cod recipe, I found the process of rehydrating the fish for 3 days rather unpleasant! I actually threw away an 18 euro piece of stockfish because it didn’t taste or smell right!

Then a chef friend of mine suggested I make my own baccalà! This actually turned out really well. It was also far easier to do than using ready salted or air-dried cod that needs rehydrating!

I bought a nice frozen Norwegian cod fillet, defrosted it, patted it dry and left it in the fridge covered in sea salt for 2 days. I then washed off the salt and let it soak for a couple of hours, changing the water every now and again. Finally, I cooked my spaghetti with salt cod alla ghiotta. The result was really really good!

The second time I made this dish I used vaccum packed ready to use baccalà that I bought at Lidl. It also turned out really delicious.

You can use this spaghetti with salt cod recipe to make two dishes. In Sicily, it’s quite common to serve the sauce and a little of the fish with pasta. Then, eat the rest of the fish with potatoes as a main course.

Alternatively, you can make it without potatoes and use it only as a pasta sauce. Although preparation takes a couple of days (if making your own baccalà), it actually involves very little preparation. Plus, cooking times are short. I hope that if you like baccalà you will give it a try.

If you make this salt cod pasta recipe I’d love to hear how it turns out and if you liked it. Please leave a comment here on the blog or on The Pasta Project Facebook page. 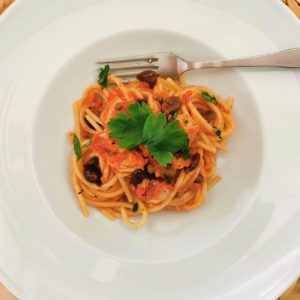 Preparation and cooking times do not include the time required to prepare the salt cod if you are making your own. I have made my own and also used ready hydrated baccalà For homemade salt cod (baccalà) I bought a nice frozen Norwegian  600 g cod fillet, defrosted it,  patted it dry and left it in the fridge covered top and bottom in sea salt for 2 days. It’s a good idea to occasionally drain any water that might have accumulated at the bottom of the dish. I then washed off the salt and let the cod soak for a couple of hours, changing the water every now and again. It was then ready to cook.
Keyword authentic Italian pasta recipe, baccalà, salt cod, seafood pasta, Sicilian food, Sicilian pasta, spaghetti

This recipe was originally published in 2017 but has been updated.