This pasta with swordfish recipe is a treat for the taste buds! It includes fried eggplant (aubergine) for authentic Sicilian taste, along with fresh mint and some grated lemon rind which really add a distinctive flavour to both the aubergine and the swordfish.

They say the way to a man’s heart is through his stomach, and since my hubby, Salvatore, is Sicilian, his stomach (and heart) is particularly partial to Sicilian dishes. It took me a number of years before I had the courage to cook Sicilian recipes for him, given that he is such a good cook himself.

Salvatore has a particular love for fish and seafood (as do most Sicilians) and his favourite seafood meals most often include pasta! So, a few days ago, I decided to spoil him with this recipe for one of his favourite pasta/seafood combinations; pasta with swordfish.

Pasta with swordfish is a very popular and typical Sicilian dish. In fact, swordfish plays a big part in Sicilian seafood cuisine. The Sicilians grill it, bake it, put it in pies, make involtini or carpaccio with it and serve it with pasta in a number of different ways. The most traditional ways to eat swordfish with pasta are either  with eggplant, like in this recipe, or with the typical Mediterranean ingredients of garlic, capers, olives, tomatoes and peperoncino, as in my post for strozzapreti with swordfish.

However, there are also a few other delicious swordfish and pasta recipes from Sicily and other Southern regions which include ingredients such as pistachios, pine nuts, almonds, zucchini or breadcrumbs. Some recipes are ‘al bianco’, meaning without tomatoes and some are traditional to the province they originate from such as ‘alla Messinese’ from Messina; made with tropea onions, celery and green olives, as well as capers and tomatoes.

I particularly like this pasta with swordfish recipe because it really is a treat for the taste buds! It includes fried aubergine, which gives it that authentic Sicilian taste, along with fresh mint and some grated lemon rind which really add a distinctive flavour to both the aubergine and the swordfish.

Different pasta choices for your swordfish.

You can make this recipe with both short and long pasta. In Sicily, you will often find it served with casarecce, busiate, strozzapreti, rigatoni and penne or with spaghetti. I chose to make it with reginette, also known as mafalde or mafaldine, a long ribbon pasta with ruffled sides which was named after the Italian princess Mafalda of Savoy. I love this pasta not only because of its unusual shape but also because of the story behind the name, despite the fact that the princess’ story was a tragic one!

In Italy and most of the Mediterranean, swordfish can be found in abundance during the summer months, so that’s when it is most often served at Italian tables. This pasta with swordfish can also be eaten cold or tepid, if you use short pasta. If you like pasta, aubergines/eggplants and swordfish, then you are bound to love this combination.

If you make this reginette pasta with swordfish recipe I’d love to hear how it turns out and if you liked it. Please leave a comment here on the blog or on The Pasta Project Facebook page. Looking forward to hearing from you. 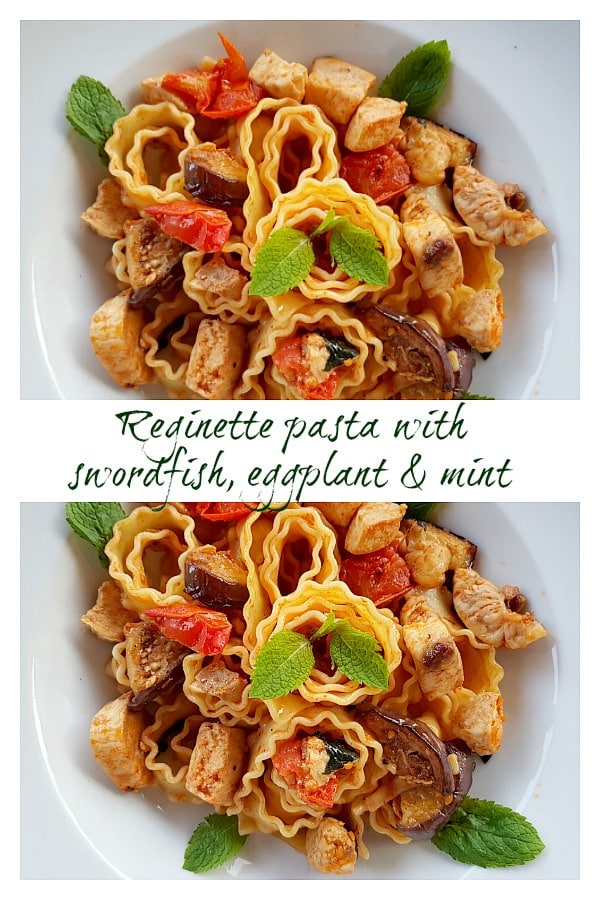 Some people salt the eggplant before cooking to draw out excess moisture and bitterness but I didn’t.
This recipe can be made with other long pasta such as spaghetti or short pasta such as penne, rigatoni, busiate, casarecce, strozzapreti etc
Keyword mafaldine, pasta, pasta recipe, seafood pasta, Sicilian food, swordfish