Although not an old traditional recipe, this potato and porcini mushroom cannelloni is one of the most scrumptious cannelloni recipes I know. The taste is exceptional! I highly recommend this recipe if you’re looking for an alternative way to serve these large pasta tubes. 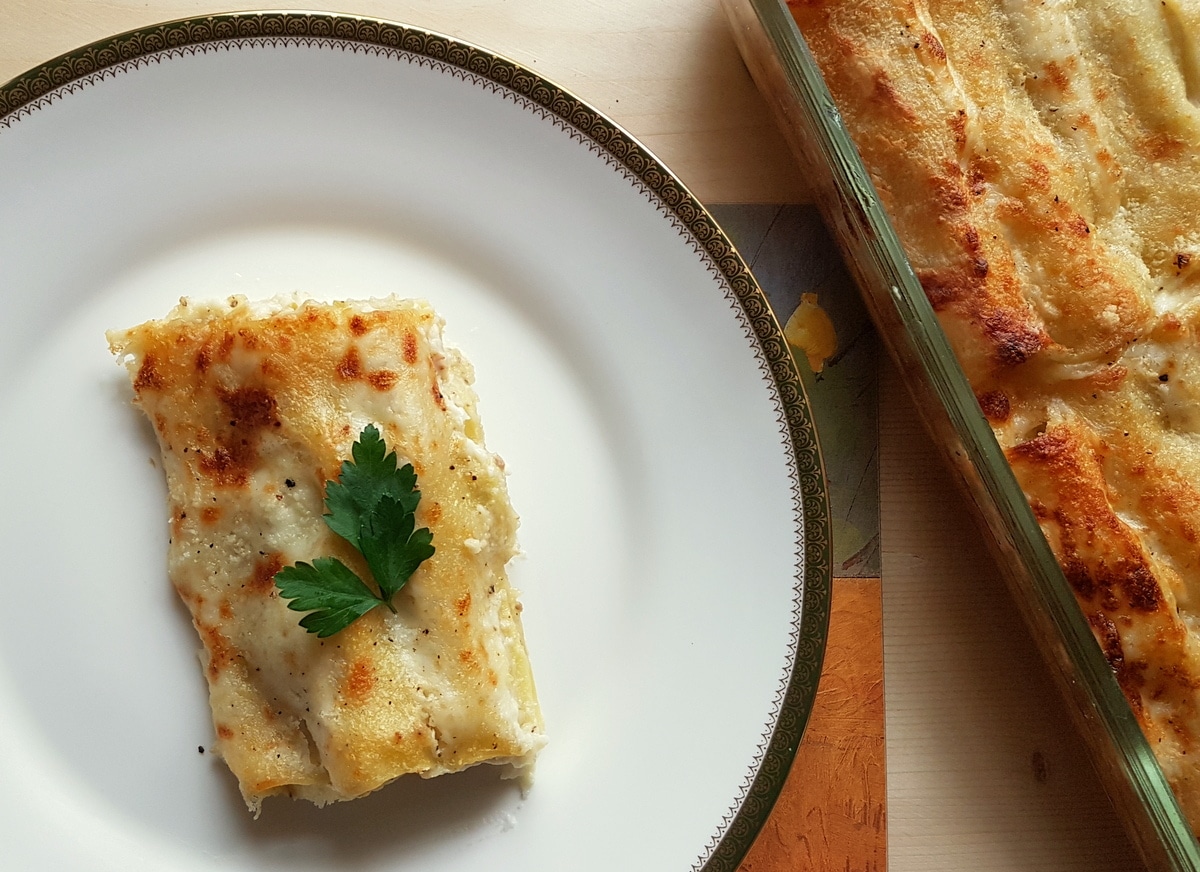 The two most traditional and popular ways Italians serve cannelloni (manicotti in USA) are either filled with a meat ragu and baked in a tomato sauce or filled with spinach and ricotta and baked in a tomato sauce and/or béchamel. As you can imagine, the filling for this potato and porcini cannelloni is different. It contains potato puree and porcini mushrooms. The sauce is a yummy cheesy béchamel. 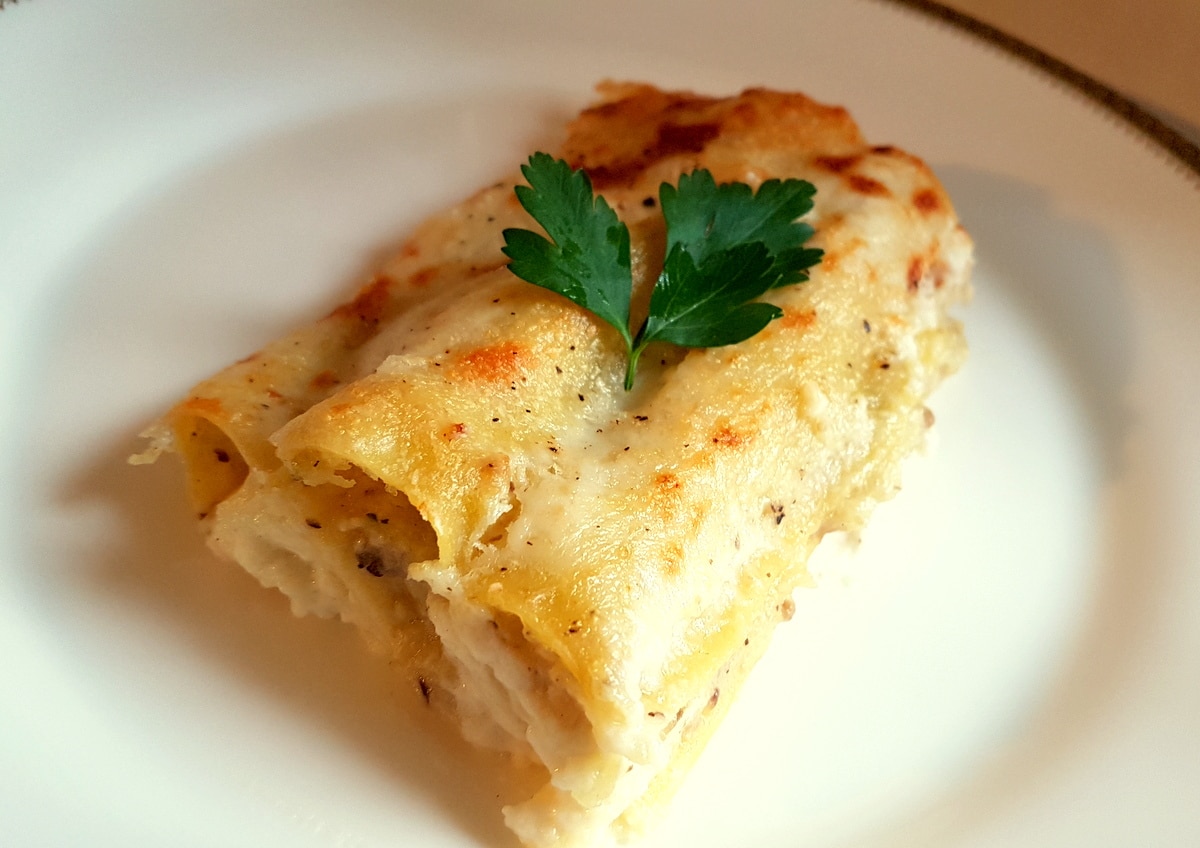 Another great thing about this dish is that it’s vegetarian and can be vegan if you use vegan cheese and milk. Also, sometimes it’s nice to make pasta without tomatoes! Don’t get me wrong. I LOVE tomatoes and here in Italy they’re so flavourful! Still, I enjoy pasta recipes which are tomato free too or, as the Italians say ‘bianca’! 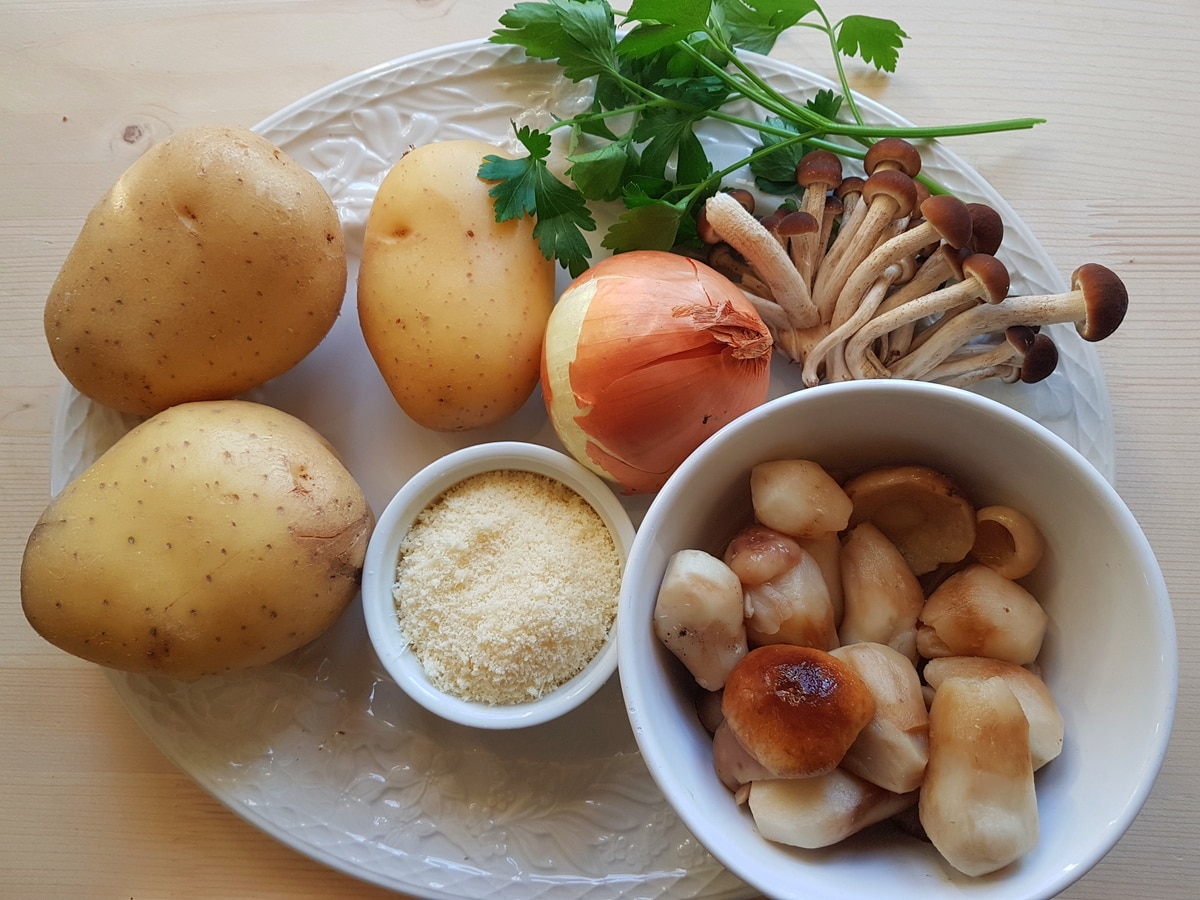 You can make this potato and porcini mushroom cannelloni (manicotti) with dried pasta tubes, which is what I did. You can also make it with fresh cannelloni. However, fresh cannelloni is a bit of a misnomer because it doesn’t really exist. 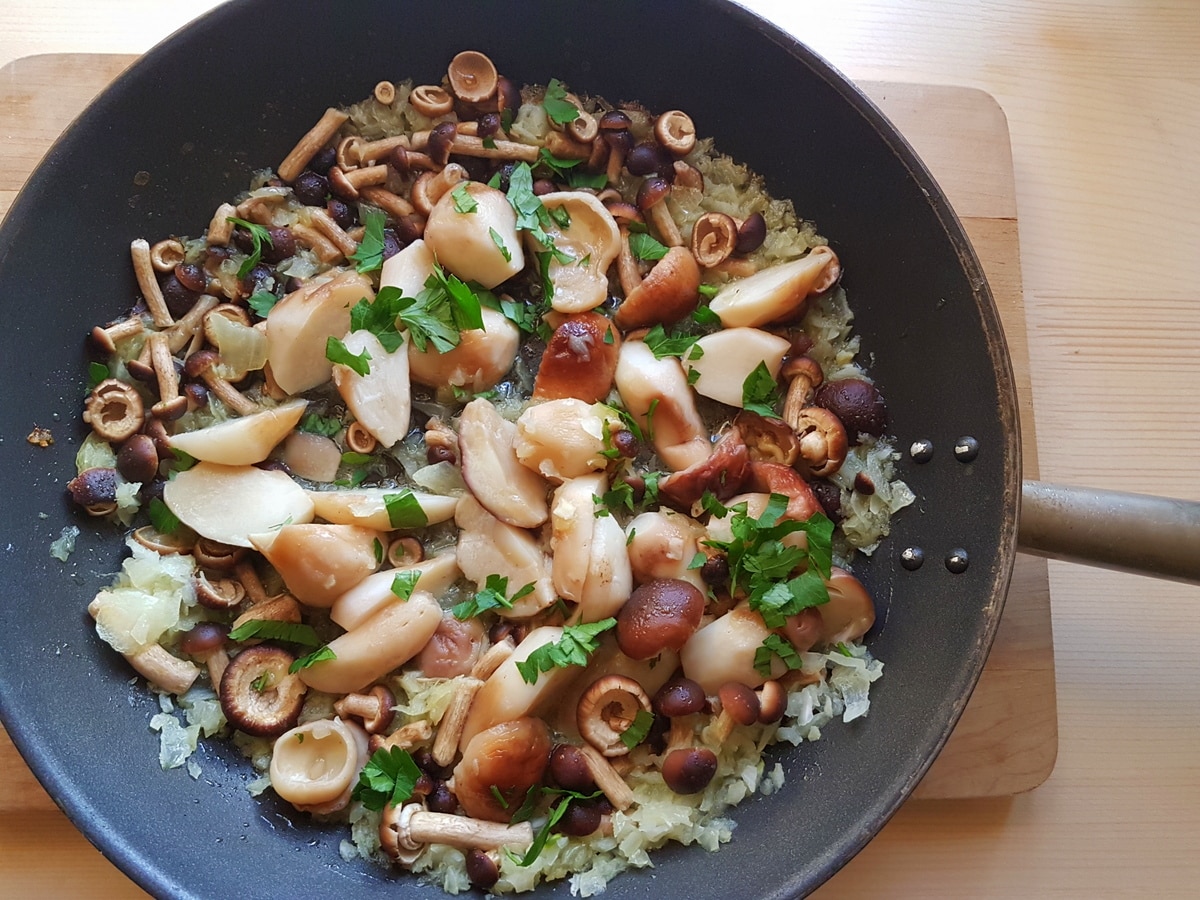 As I have mentioned in other posts, fresh cannelloni are in fact rolled up lasagne pasta sheets. That fact gives you two options; buy the fresh sheets ready-made or make them yourself! If you’d like to make them yourself you can follow my recipe for homemade lasagne. 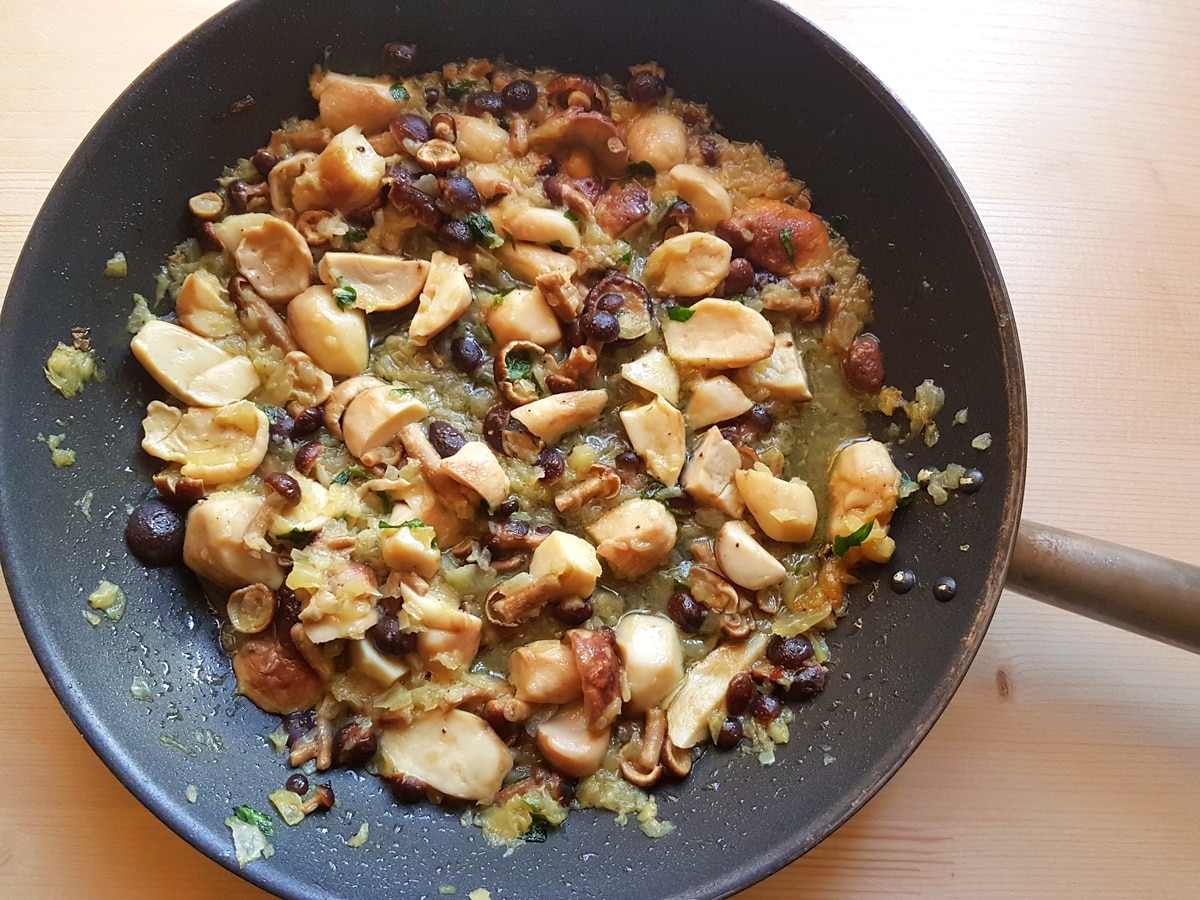 If you decide to use dried cannelloni make the béchamel a little more liquid as the pasta will have to cook in the sauce. I also cooked the dish covered in aluminium for 15 minutes before removing the cover so that the top of the pasta can get nice and crispy! 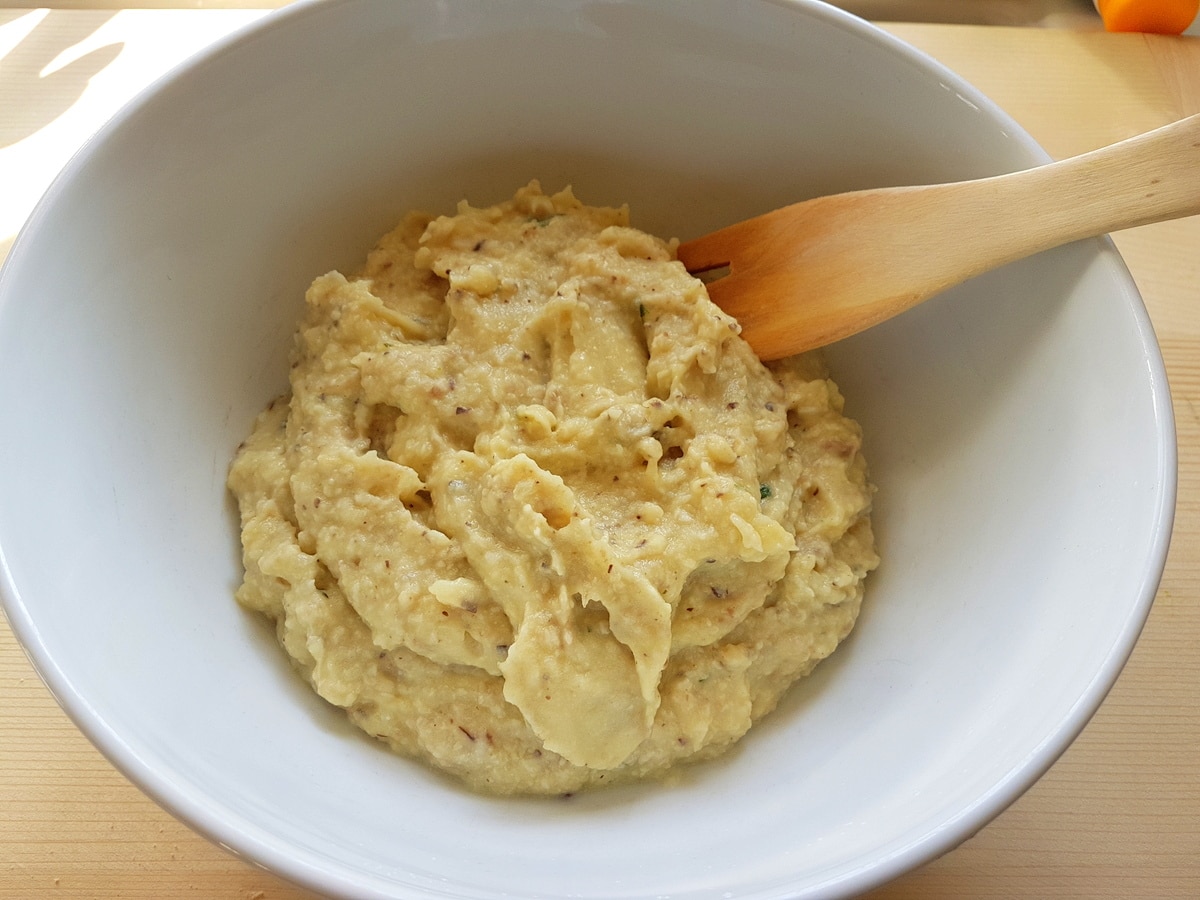 Fresh pasta cooks very fast and there’s probably no need to cover it. Just bake until the top is a nice golden crispy brown and the pasta is cooked enough to eat. If the pasta doesn’t seem cooked and the top is already brown enough, just cover the dish with aluminium foil until the pasta is ready. 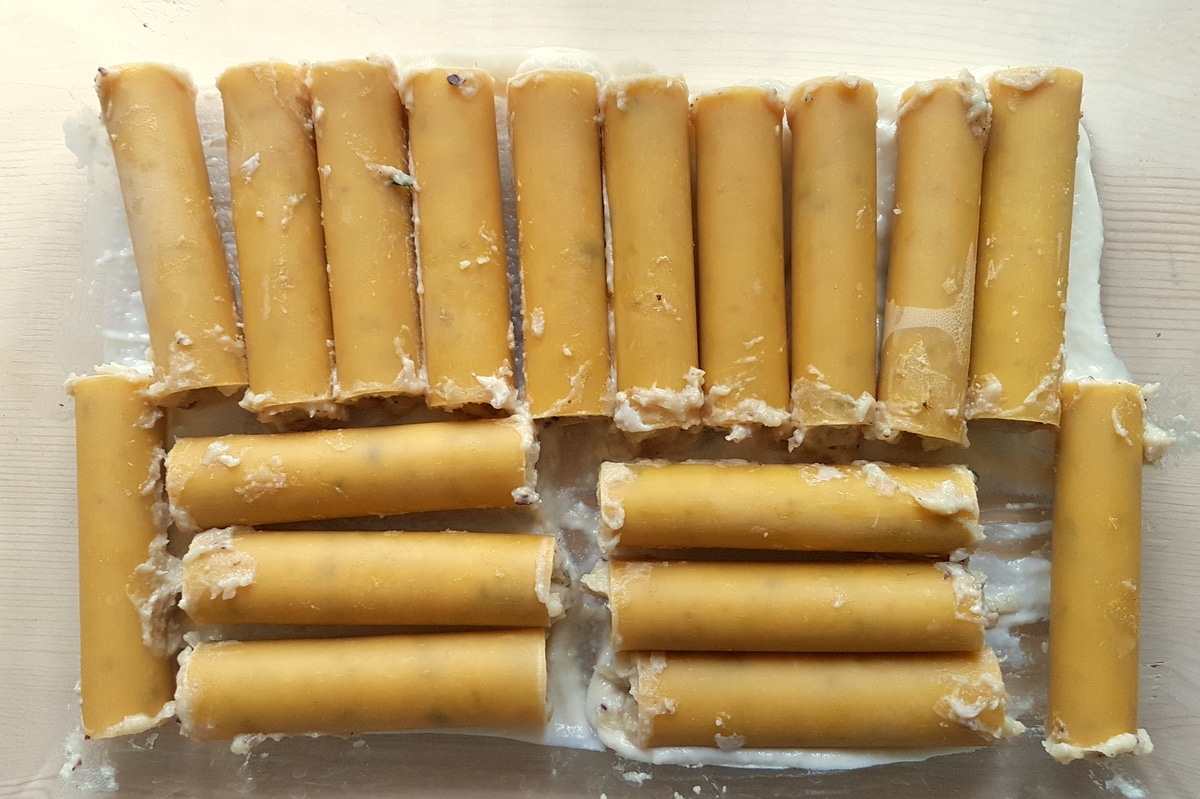 Which mushrooms are in this dish?

Although this potato and porcini mushroom cannelloni (manicotti) recipe isn’t traditional, it’s popular. In fact, I found quite a number of versions for it.  The recipe I followed is the most simple, except I also added Pioppini mushrooms. You can use just porcini (ceps) or include another type of mushroom if you prefer. 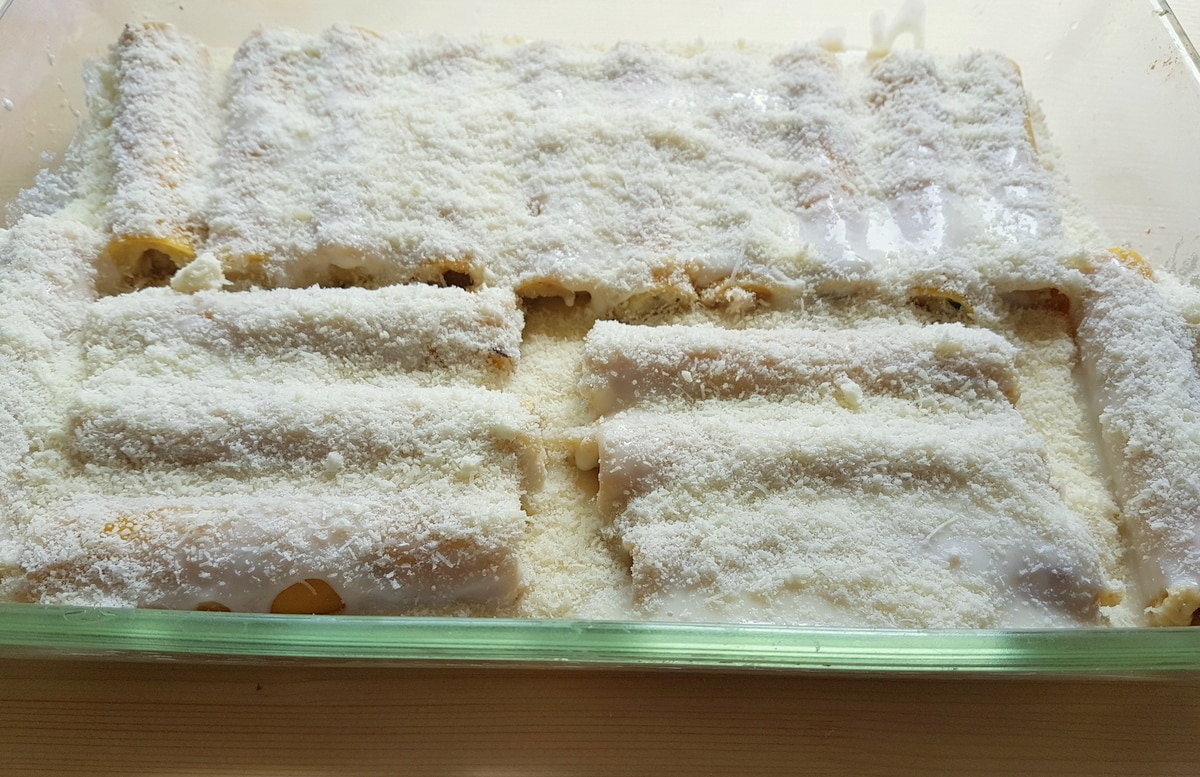 But, the combination of porcini and potato is what gives this dish its divine flavour, so the porcini are a must. I used frozen ones because I don’t really like dried porcini. You can use either. Of course, if you can get your hands on fresh porcini, that’s even better!! Don’t forget to soak the mushrooms first if you are using dried ones. 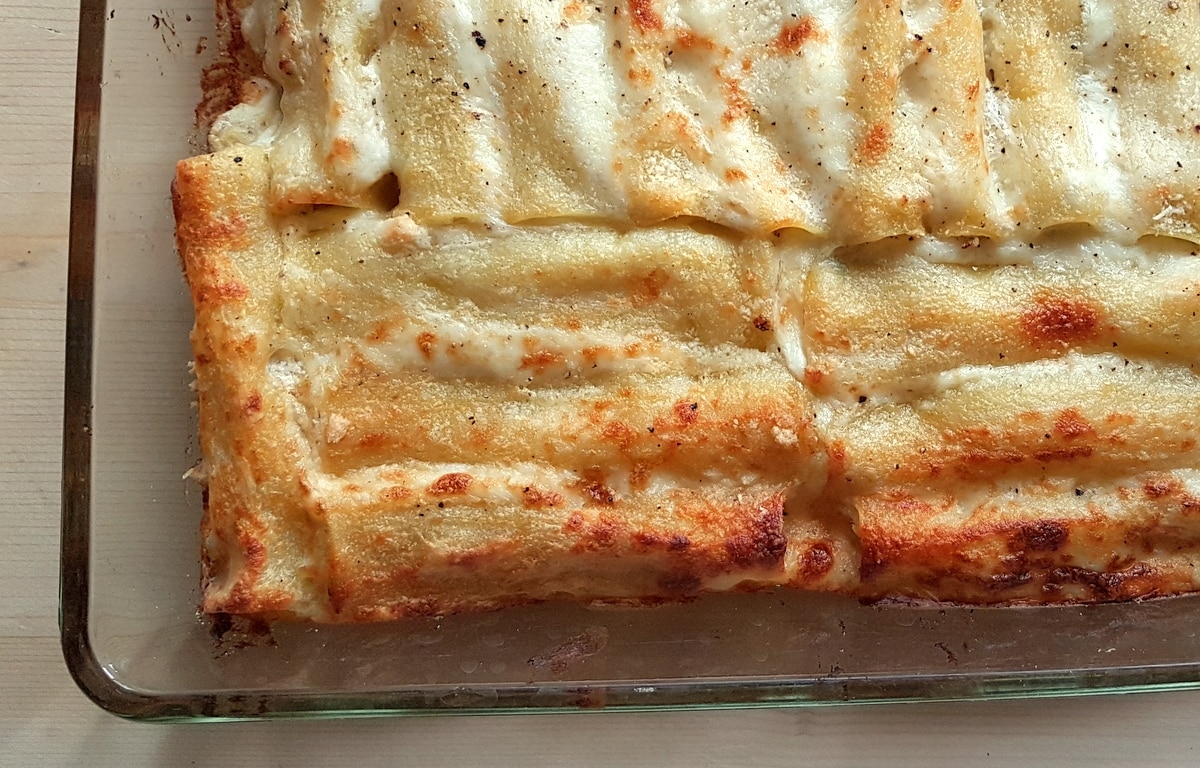 Let me know if you try it!

I served this dish to guests last weekend and they totally fell in love with it. I’m sure you will too! If you do decide to make it, please let me know how it turns out and if you liked it. You can leave a comment here on the blog or on The Pasta Project Facebook page. 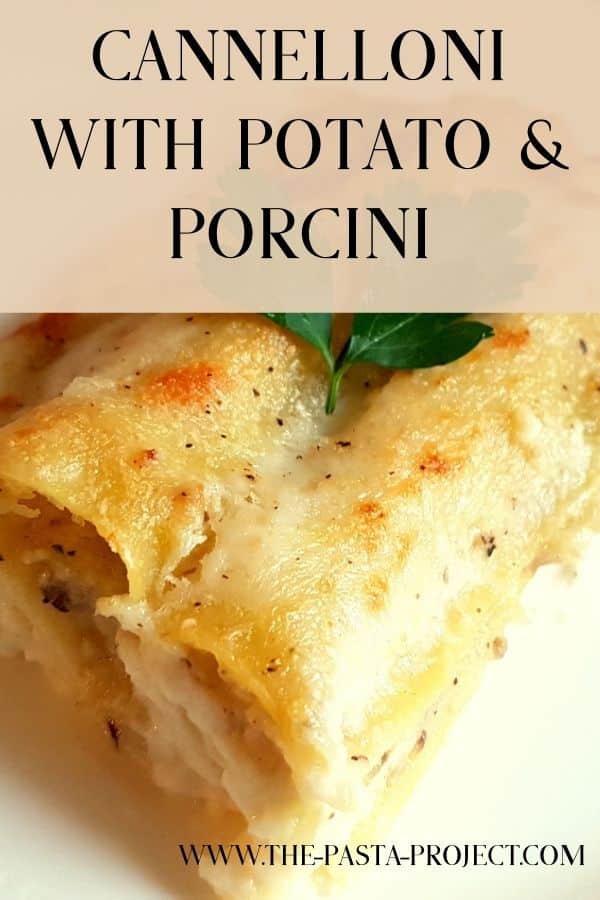 Other pasta recipes with porcini mushrooms to check out.

Want to save this recipe for later? 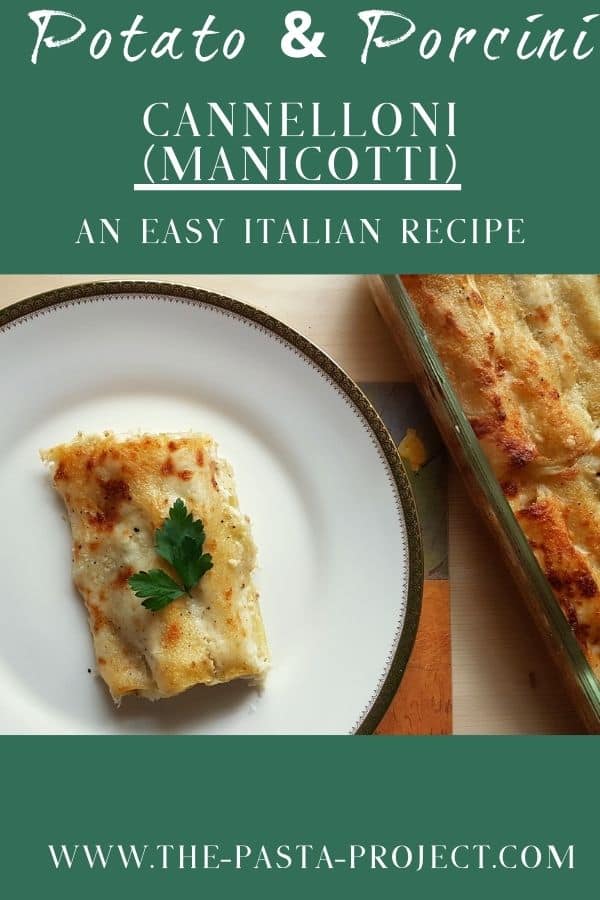 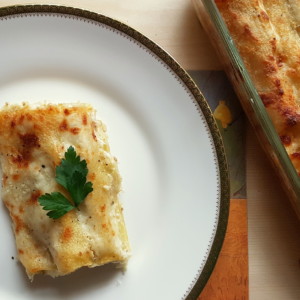 Put the dish together

Fresh pasta cooks very fast and there’s probably no need to cover it. Just bake until the top is a nice golden crispy brown and the pasta is cooked enough to eat. If the pasta doesn’t seem cooked and the top is already brown enough, just cover the dish with aluminium foil until the pasta is ready. For dried pasta tubes make the béchamel a little liquid as the pasta has to cook in it. Check the pasta is cooked before serving. Depending on the quality of the pasta it may take a bit longer. I use dried cannelloni from a pasta makers called Pasta Rigo but they mostly make pasta for other brands so they don't sell directly to the public. Another cannelloni I like is made by Garofalo!
Keyword authentic Italian pasta recipe, baked pasta recipe, cannelloni, ceps, Italian recipe, manicotti, porcini 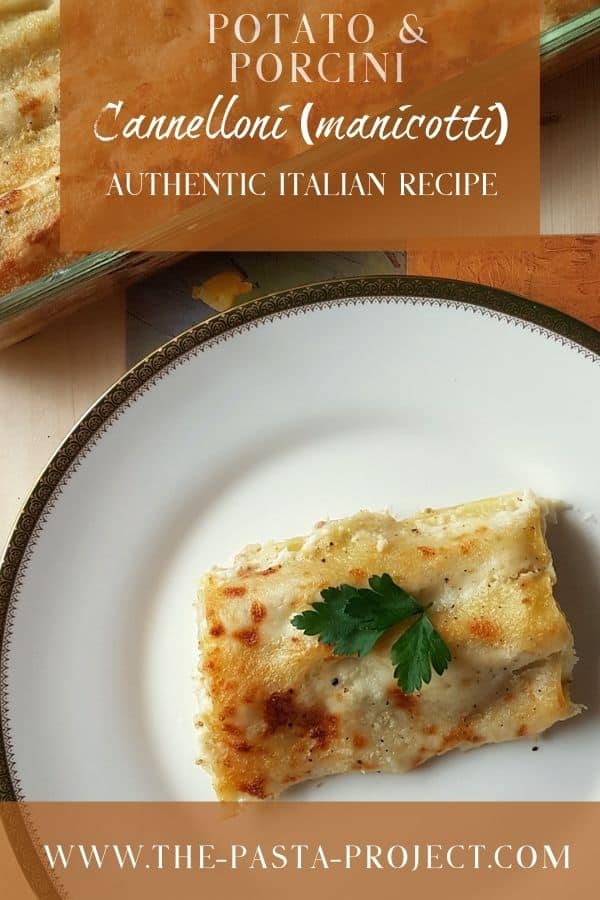 This recipe was originally published in 2018 but has been updated.