Trapanese pesto is a fresh and flavourful sauce from the Western Sicilian city of Trapani. It’s easy to make and perfect on pasta, bruschetta or as a dip. In Sicily, they most often serve pesto alla Trapanese with busiate pasta, but you can use other types of pasta instead.

During a recent holiday in Sicily we got to try quite a number of delicious Sicilian pasta dishes including this tasty busiate with Trapanese pesto. This traditional dish is mostly eaten in the province of Trapani in the Western corner of Sicily.

There are a number of different pesto recipes from Sicily. I particularly like pistachio pesto, which is, of course, made with pistachios. Sicily is famous for its pistachios, particularly those from Bronte in Catania province.  There is also another delicious Sicilian pesto made with tomatoes, ricotta salata or fresh ricotta and pine nuts, which is usually referred to as pesto alla Siciliana (see link below).

This delicate and refreshing pesto gets its name from the town of Trapani in Western Sicily, where it originated. Trapanese pesto, ‘agghiata trapanisa’ in the local dialect, is a traditional centuries-old recipe said to have been invented in Trapani harbour.

Food historians believe that Genovese merchant ships coming from the East used to stop in Trapani to trade or to replenish supplies. Apparently, the Ligurian mariners introduced the Sicilians to their own traditional basil pesto Genovese.

The Sicilians modified the original recipe by adding ingredients typical of the island. Trapanese pesto contains almonds and tomatoes and has a more delicate flavour than pesto Genovese. According to tradition, all the ingredients should be ground in a mortar. But, of course, it is possible to blend the ingredients using a food processor.

Using a food processor vs a pestle and mortar.

The Trapanese say that the texture and colour of the finished pesto are affected by the metal blades of a processor. Apparently, the basil oxidizes when it comes in contact with metal, which often results in a darker, brownish coloured pesto. I use a processor for my Trapanese pesto. But, I pulse in short bursts, which helps preserve the basil. Of course, if you want to use a mortar and pestle, it’s still quite quick and easy to make. Plus, you’ll be able to boast that your pesto really is ‘handmade’!

There are a few variations to this recipe. Some cooks in Sicily add grated bottarga (tuna roe) or tinned tuna to the sauce, others use mint leaves instead of basil and chili pepper (peperoncino) is a popular addition. Also, grated cheese isn’t always included in the sauce. As in this recipe, Trapanese pesto is often served with toasted breadcrumbs instead of extra grated cheese but you can substitute cheese if you prefer.

How to serve Trapanese pesto

You can use this pesto in both warm pasta dishes and pasta salads. In Trapani, the traditional pasta for this pesto is almost always busiate. This is a long or short corkscrew-shaped pasta. It’s traditionally made by wrapping pieces of semolina flour and water dough around a metal rod to give it its distinct shape. I always think busiate looks like the old landline telephone cords.

I have served this Trapanese pesto with dried busiate which I bought in Sicily and fresh short busiate which I can buy locally. However, if you can’t get or make busiate, long or short fusilli are a good substitute. Plus, you can also use linguine or spaghetti.

I loved the freshness of this pesto recipe. It’s perfect for light and fast meals and can be made vegan by not including any cheese or using a vegan cheese. I often serve my pasta with Trapanese pesto with some extra chopped tomatoes and a side salad.

If you try this Sicilian pesto pasta recipe, do please let me know what you think by commenting here on the blog or on The Pasta Project Facebook page. Your feedback is much appreciated!

(I originally posted this recipe in October 2017, but I have now updated it with new photos and text!)

Other pesto recipes to try. 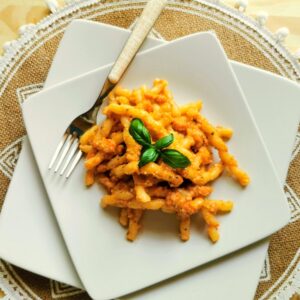 Jacqueline De Bono
Pesto Trapanese is a refreshing and delicate pesto from Western Sicily. Perfect for light meals or when you want to make something quick and easy that all the family will enjoy. Serve it with pasta, as a dip or on bruschetta.
5 from 10 votes
Print Recipe Save Recipe Saved!
Prep Time 20 mins
Cook Time 15 mins
Total Time 35 mins
Course Main Course
Cuisine Italian, Mediterranean, Sicilian, Southern Italian
Servings 4
Calories 699 kcal

Traditionally this pesto is served with busiate pasta but you can also use long or short fusilli, spaghetti or linguine, as well as short pasta such as penne.  You can make this pesto vegan by omitting the cheese and serving with toasted breadcrumbs. Or by using a vegan cheese.
Keyword authentic Italian pasta recipe, busiate pasta, pesto, Sicilian pasta, Sicilian pesto, Trapanese pesto