Bigoli pasta with luganega sausage; a recipe from Veneto! 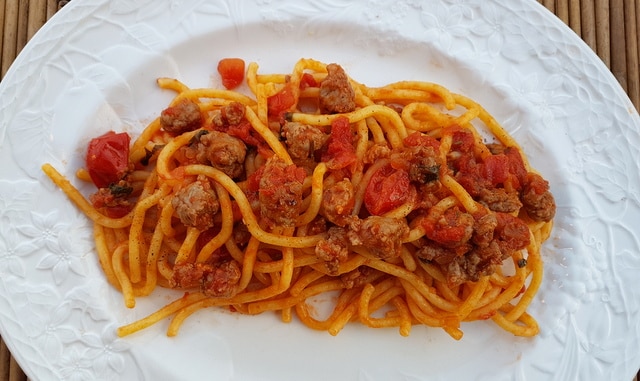 Before coming to live in Italy, I had actually never eaten pasta with sausage ragu. However, it’s now one of my favourite ways to serve pasta when I want a hearty meaty sauce, especially now that autumn is upon us! This bigoli pasta with luganega sausage is traditional in Veneto, the region I live in.(go straight to recipe) 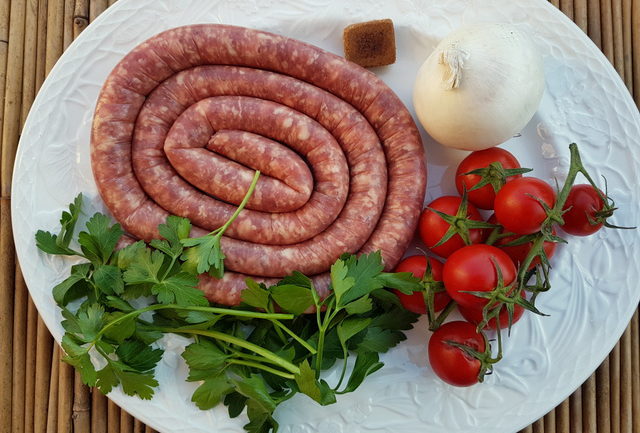 In my opinion, sausage meat adds much more flavour to pasta sauce than, let’s say, minced beef or pork. Most probably because most types of Italian sausages have other ingredients apart from the meat used to make them. In fact, some meat sauces include sausage as well.

Every Italian region produces local types of pork sausage, the ingredients of which vary from place to place even when the sausage has the same name. This is very much the case for luganega sausage, which is a long coiled sausage not divided into smaller links. Luganega is sometimes called ‘salsiccia al metro’ (sausage by the metre) because in some places it’s sold by the metre! 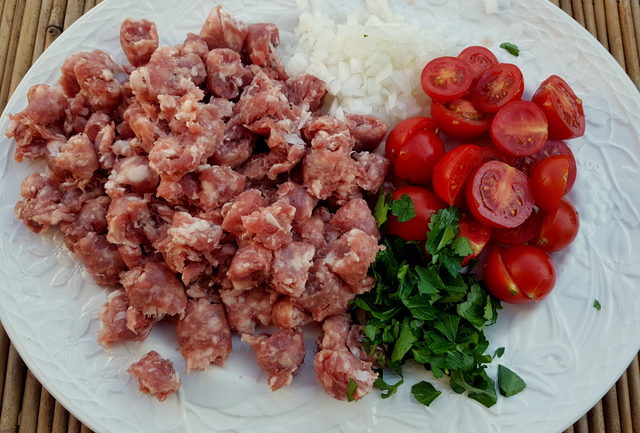 Luganega is usually a fresh pork sausage made from the cheek or neck of the pig, although in some regions they use the pork shoulder or rib meat as well.  It is particularly popular in Northern and Central Italy, although it apparently originated in Basilicata, where it is known as ‘lucanica’ or ‘lucania’ and is said to have been popular with the Roman legions who brought it to the North. 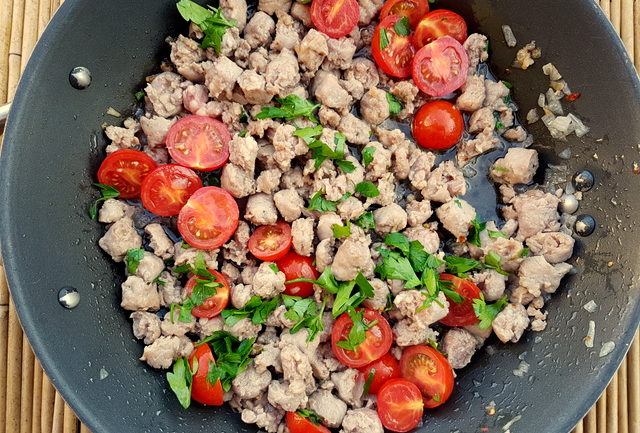 In Basilicata some ‘lucania’ are made with wild fennel, others with red chili pepper (peperoncino). Here in Veneto, one type of this sausage has rice in it as well as spices such as cloves, cinnamon, coriander and nutmeg. In Lombardy, the most famous luganega come from Monza where they make it with Parmesan or Grana cheese, Marsala wine and meat broth and serve it in a risotto!

There are other well-known types of this sausage made in Trentino-Alto Adige, Lombardy and here in Veneto. Many of these are used in pasta or risotto dishes, but luganega are also eaten grilled or cooked with vegetables. For this recipe for pasta with luganega sausage, I used one of the simplest Venetian luganega (luganeghe in the local dialect) slightly flavoured with pepper and garlic. 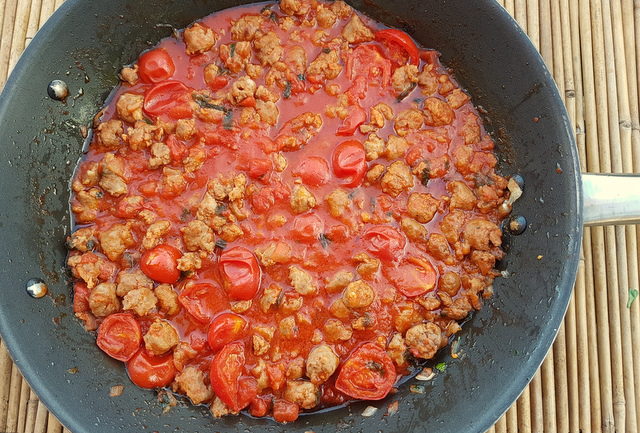 Bigoli the most traditional pasta in Veneto!

The pasta for this recipe is also local. Known as bigoli, this usually fresh pasta is very particular to Veneto and not usually made or eaten in other regions except Eastern Lombardy. Bigoli is made with flour, eggs (often duck eggs), salt, water or milk and sometimes butter. It’s shaped like very thick spaghetti with a diameter of about 3-4mm.

Traditionally bigoli was made with a press called a torchio or bigolaro which had to be wound by hand as the pasta dough passed through the holes in the bottom. You can read more about the history of bigoli in this other post. 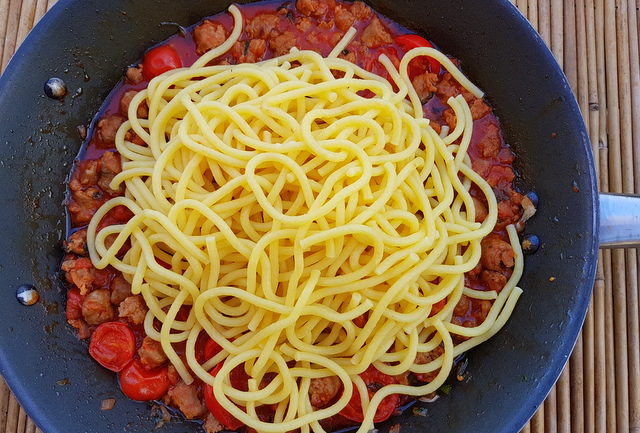 Using other types of sausage.

There are a number of companies in UK and US that make Italian luganega (luganica) sausages. However , if you can’t find this sausage where you live, you can also use other types of fresh Italian pork sausage. In fact, these are available in a number of UK or US supermarkets or butchers.

Some Italian sausages will probably be flavoured with fennel, which adds a slightly different but tasty flavour to the sauce. The important thing is that the sausage has a mild even slightly sweet flavour. So, for this recipe I wouldn’t use sausages with chili (peperoncino) in them. It’s better to add some fresh or dried chili when making the sauce if you want it to be a little spicy. 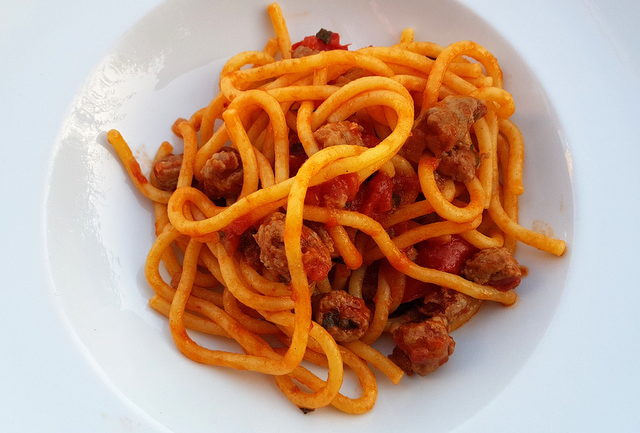 If you have never tried pasta with sausage ragu and like the idea, this bigoli pasta with luganega sausage recipe is a great one to start with. Apart from the sausage, it includes just a few other simple ingredients. These are mainly onion, wine, tomatoes and stock.

It doesn’t take long to make this dish and it is very tasty. I promise you! In fact, I’m sure it will be loved by whoever you make it for. In Italy, it’s a firm favourite among young and old alike.

If you make this bigoli with luganega sausage, I’d love to hear how it turns out and if you liked it. Please leave a comment here on the blog or on The Pasta Project Facebook page.