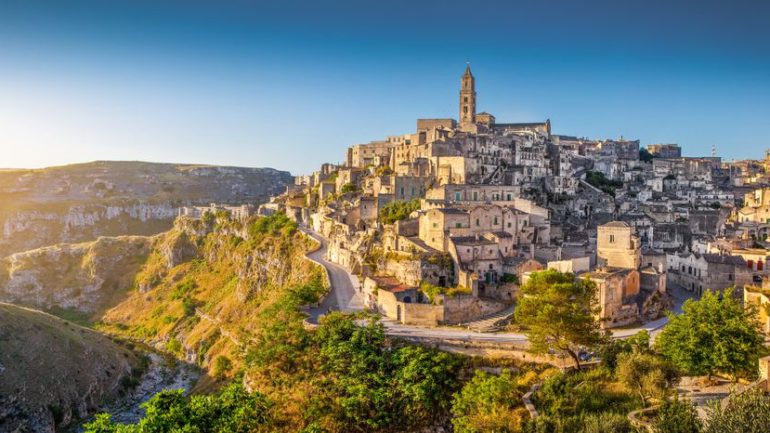 Basilicata is a mountainous region in Southern Italy, located in the instep of the Italian boot between Puglia, Calabria and Campania.  It has two short coastlines, one to the west along the Tyrrhenian Sea and the other to the south on the Ionian Sea. Once occupied by the Romans, Basilicata was then named Lucania.

Although not one of Italy’s most popular tourist destinations, Basilicata has a lot to offer especially when it comes to ancient architecture and historical art. The coastline is home to some of Italy’s finest archaeological sites and the countryside is dotted with numerous small ancient villages. The region’s original capital, Matera, is a must see with its historical centre, a UNESCO world heritage site.

Historically Basilicata was a poor and isolated region, and this is evident in the rustic ingredients used in the region’s kitchen. Fresh fish is available on the coast, of course, and  is used in a number of traditional recipes, or preserved in salt and oil. Anchovies, tuna, sardines and salt cod are all popular. Fresh, often home-grown, vegetables such as tomatoes, chick peas, fava beans, potatoes, lentils, carrots artichokes, broccoli and onions are all staple crops, as are olives, wine grapes and durum wheat. 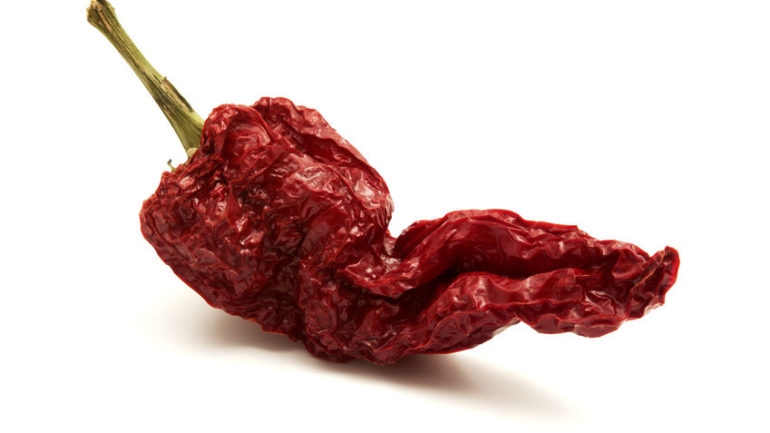 Different kinds of peppers, both spicy and sweet, are a signature of Basilicata’s cuisine. However, the region’s most popular pepper is the bright red, thin-fleshed peperone di Senise, which comes from an agricultural region near the city of Senise. These peppers are often hung on long ropes and left to dry in the sun, which further enhances their flavour. They are then added to soups and other dishes or pulverized into a sweet, paprika-like powder that’s known locally as ‘zafarano’ and is used as a seasoning and preservative for the region’s famous pork sausages.

Meat is not so varied in Basilicata but lamb is used in many traditional recipes and pork plays an important part in the region’s food culture. Different types of pork sausages are produced in Baslicata, including Lucanica, Soppressata and Pezzenta, which combines pork, lamb and veal meat. The pork in this region has a different flavour to other regions, most probably because the pigs are often left to graze with the sheep and goats, so they tend to have less fat and the meat is leaner. 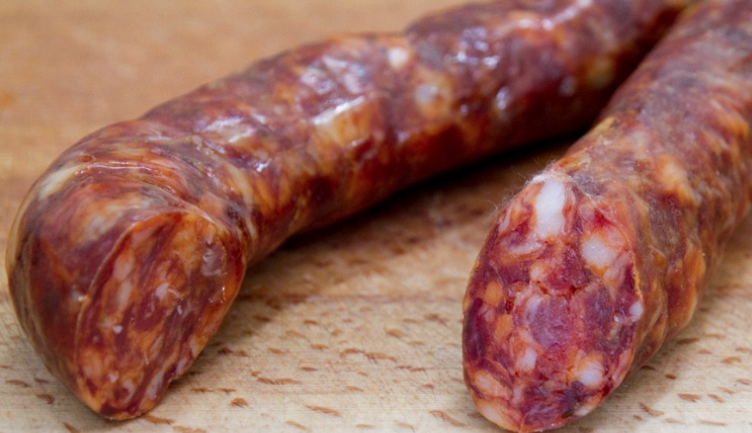 Like most of Italy’s southern regions, flocks of sheep and goat can be seen all over the hills of Basilicata. Apart from meat, they provide milk used to make a lot of the region’s cheeses, such as Pecorino, Ricotta, Caciocavallo, Butirro, Manteca, and Cacioricotta and Canestrato.

Caciocavallo podolica della Basilicata is a famous cheese made from milk from Podolica cows. These semi-wild cattle roam the rugged Apennine terrain and are difficult to domesticate. However, the low milk yields of these cows and the labor-intensive methods used to produce this cheese make it expensive and difficult to find outside of the region. 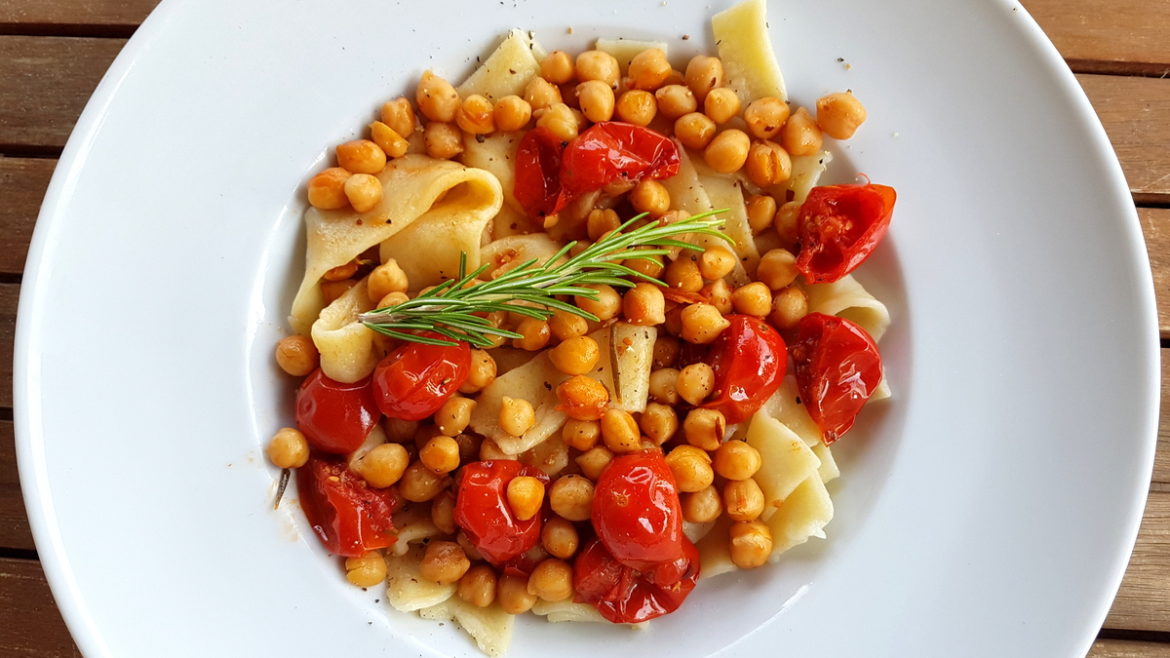 Wheat, as mentioned before, is an important crop in Basilicata and is used to make bread and both artisan and commercial pasta. In fact, Basilicata is said to be the first place in Italy that pasta was recorded. There are over 10 kinds of typical fresh pasta produced in the region, each one unique in the way it is made. The most well-known are orecchiette which are usually handmade, tapparelle which are like big orecchiette and lagane (similar to short wide tagliatelle). Garlic, olive oil and peperoncino are the basic ingredients of many Basilicata pasta sauces, to which seasonal vegetables or locally produced meats are often added.

Lucane chiappute, a sweet pasta dish with raisins, almonds, walnuts, wine, sugar and cinnamon is a regional pasta dish made with lagane that dates back to the Romans.  In Basilicata, Lagane are also typically served with chickpeas, lagane e ceci. Strascinati is a homemade pasta slightly similar to orecchiette often used in a recipe called Strascinati con Lu’ntruppc. Made from veal, pork and local sausage, this sauce is usually only prepared for important occasions as it takes a while to cook. 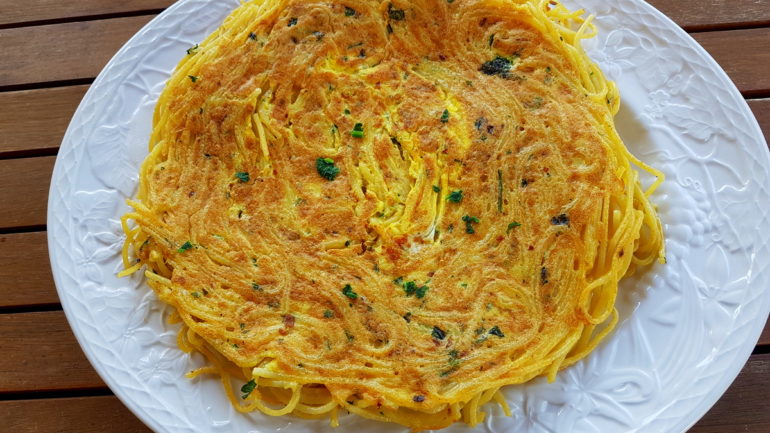 One of my favourite pasta dishes from Basilicata is orecchiette con salsa piccante (spicy sauce) which is made with a tomato sauce and the typical spicy salami from the region. I have only eaten this in Basilicata but I want to cook it at home very soon! I also want to make pasta con peperoni cruschi, one of the region’s signature dishes made from dried Senise peppers fried in olive oil and then served with pasta and bread crumbs.

The first recipes I have made for you from this region are vermicelli pasta frittata a delicious way to use up leftover pasta and the very nutritious vegetarian dish, lagane with chickpeas  Both recipes contain Basilicata’s signature ingredients, garlic, olive oil and peperoncino. I hope you’ll give them a try the next time you have any leftover pasta or are looking for a healthy one course pasta dish.