Traditionally made for Easter, pastiera is a ricotta pie popular in different parts of Italy. However, it’s most famously a Neapolitan recipe. Like many Italian dishes, there are, of course, variations of pastiera Napoletana. The most well-known is made with cooked wheatberries, ricotta and candied fruit baked in a pie crust. But, in different areas of Naples and Campania, locals also make pastiera with rice or pasta. This Neapolitan ricotta and pasta pie is simpler to make than the wheatberry version, but it’s just as delicious!

Although I couldn’t find a reference about the origins of Neapolitan ricotta and pasta pie, pastiera with wheatberries has a long and ancient history. There is a legend about some fishermen who were stuck at sea because of a sudden storm. Once they managed to return to land, people asked them how they had been able to manage ​​for such a long time. They replied that they had been able to eat ‘Pasta di Ieri’ (yesterday’s pasta) made with ricotta, eggs, wheat and herbs! Hence the name pastiera!

Irrespective of whether the fisherman story is true, it is a fact that Neapolitan pastiera dates back to the 1600s. The first written recipe was published in 1693 in the cookbook Lo Scalco alla Moderna (the modern steward) by Antonio Latini. Latini was steward to Don Stefano Carrillo, first minister to the Spanish Viceroy of Naples.

The recipe for pastiera in Latini’s book was different to the one traditional today. It included parmigiano cheese, pistachios and pistachio milk with everything wrapped in a marzipan paste. What is considered the real original recipe is the one from the convent of San Gregorio Armeno in the historical centre of Naples.

Apparently, the nuns who lived there wanted to make a cake that could combine some of the most symbolic ingredients of the Easter period, first and foremost eggs, which represent rebirth in Christian symbolism. The pastiera made at the convent became famous. The nuns prepared large quantities during Holy Week offering the cakes to Neapolitan noble families.

There are actually a few different versions of Easter pie with pasta. Known as ‘pastiera ‘e ferellini’ in the local dialect, one version comes from the towns of Torre Annuziata and Torre del Greco situated on the coast of the Bay of Naples between Naples and Pompei. This recipe calls for dried angel hair pasta.

These two municipalities are pretty close to Gragnano, where some of the best dried pasta in Italy has been made for over 500 years. Although not a verifiable fact, I read that the use of pasta in this pastiera is likely connected to the fact that pasta is such an important local product.

The recipe below is for another type of pastiera with pasta known as pastiera with tagliolini or pastiera di Mondragone. Mondragone is a coastal town northwest of Naples. There they usually make this Easter pie with homemade tagliolini pasta. I used nests of very fine dried tagliolini. You could also use angel hair pasta.

Other ingredients in this pastiera with pasta.

Pastiera with pasta can be made with ricotta or without. However, I think ricotta is a traditional pastiera ingredient and decided to include it. Rice pastiera usually has ricotta in it too. It also calls for a pie crust but recipes for the pasta version don’t always include pastry. I didn’t. Mostly because I wanted to make the simplest and easiest version of this classic Neapolitan Easter dessert.

Apart from the pasta and ricotta, all you need is eggs, milk, butter, cinnamon, vanilla, orange blossom water and orange and lemon zest.

How to make pastiera with tagliolini.

This recipe is super easy to make. First, cook the pasta very slightly less than al dente. Then drain it well and put it in a bowl with the butter and mix well. Once the pasta has cooled a little add the milk and mix again. Blend or mash the ricotta with the sugar and the vanilla, cinnamon and other aromas. Then add the eggs a little at a time. Mix everything together before incorporating the ricotta mixture into the pasta and milk.

Finally grease a 23 cm (9in) round, square or rectangular cake pan, sprinkle it with a little sugar and add the pasta mixture. Cook your pasta pastiera in a preheated oven at 180°c for about 40-45 minutes. The top should turn a golden-brown in colour. Let your pie cool and then sprinkle with a little icing sugar, slice and serve.

Let me know what you think!

Although this Neapolitan ricotta and pasta pie is traditionally an Easter recipe, I think it is perfect for any occasion. As a rather unusual dessert option pastiera with pasta will wow your guests. It’s full of unique Southern Italian dessert flavours that all the family will love!

If you try this Neapolitan ricotta and pasta pie recipe, do please let me know what you think by commenting here on the blog or on The Pasta Project Facebook page. Your feedback is much appreciated!

Other sweet pasta recipes to try.

WANT TO SAVE THIS RECIPE FOR LATER?

You can bookmark this page, print this recipe or pin it for later. 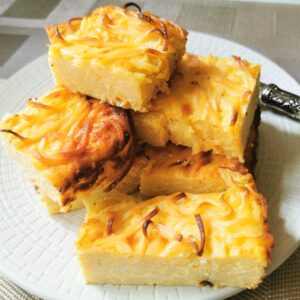 This Neapolitan ricotta and pasta pie keeps well in the fridge for 2-3 days in an airtight container. You can bake your pastiera in a round or square cake tin. Also lining to pan with baking paper will help to prevent sticking and make it easier to remove the pie whole from the pan.
Keyword authentic Italian pasta recipe, pastiera, ricotta pie, sweet pasta, tagliolini