Carnival is fast approaching here in Italy and with it comes some wonderful typical Italian foods, like this unbelievably scrumptious cinnamon butter gnocchi recipe from Veneto, where I live.

Probably the most famous Italian carnival celebrations are held in Venice. I’m lucky enough to live only one hour away. Most years, I go there to not only join in the revelry, but to also take photos. Venice carnival is a fabulous photo opportunity!

However, carnival is celebrated throughout Italy! Almost every town and village holds carnival celebrations which often include colourful float parades and costumes. And, of course, stalls selling traditional carnival fare such as this gnocchi carnival recipe.

Most typical Italian carnival recipes are sweet! Even normally savoury food is sweetened like this cinnamon butter gnocchi. I guess because carnival is traditionally  a period of indulgence immediately prior to Lent.

Although official carnival celebrations start on a Sunday (this year March 3rd). The beginning of carnival is often celebrated on the Thursday before known as ‘Giovedi grasso’, meaning fat Thursday.

The last day of carnival is martedi grasso (mardi gras or fat Tuesday.) These 2 days are called ‘fat’ because in the past people ate in abundance, using up all the stocks of foods, such as meat, which was stored at home, before starting a period of fasting.

This recipe for cinnamon butter gnocchi dates back to the Renaissance and is a traditional carnival dish in Veneto. In Italian, it is also known as gnocchi alla Veneta. There are a number of  versions of this recipe in different parts of the region. This one is the simplest.

In many places, they add grated cheese such as Parmigiano Reggiano. In others, they include raisins. Many also serve these gnocchi with tomato sauce. I made this dish without cheese, raisins or tomato sauce. But, you can add them if you like the idea! There is also a version called gnocchi alla Polesana in which the gnocchi are usually made with sweet potatoes.

In fact, I recently ate cinnamon butter gnocchi with tomato sauce at a friend’s house. It was amazing! Our host, a great cook, gave us some rather thick homemade tomato sauce to mix with the gnocchi once it was plated. On that occasion, we ate the cinnamon butter gnocchi as a starter (primo in Italian). This is the traditional way, but you can also eat this gnocchi carnival recipe as dessert!

To make this cinnamon butter gnocchi, you will need potato gnocchi. If you wish to make your own, you can see the recipe here. The sauce is simply melted butter with cinnamon. When you plate the gnocchi you just need to sprinkle on some brown sugar!

Cinnamon butter gnocchi may sound unusual to you, but I promise you it is absolutely Amazing with a capital A! I am sure that if you try it, you will think the same!

If you do try this cinnamon butter gnocchi carnival recipe, I’d love to hear what you think. Please write a comment here on the blog or post a comment on the Pasta Project Facebook page.

Other potato gnocchi recipes to check out!

Want to know more about my life in Italy? Subscribe to my newsletter. New subscribers get a free recipe e-book series too! 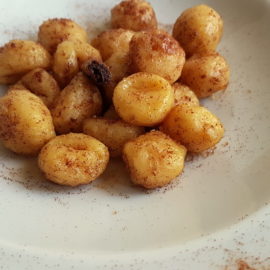 This recipe can also be made with pumpkin or sweet potato gnocchi. In some parts of Veneto they also add raisins and serve the gnocchi with tomato sauce.
Keyword cinnamon, gnocchi, Italian food, potato gnocchi, sweet pasta

If you are interested in learning how to make homemade pasta and different types of gnocchi, check out my shop page for some great video online courses from my friends in Rome! Nothing beats learning to make pasta from Italians! Plus while you’re there why not order a copy of my newly published autumn/winter pasta recipes cookbook!