The star of this seriously tasty casarecce pasta alla peperonata is a stewed sweet pepper sauce that’s very traditional in Southern Italy. Peperonata can also be eaten as a side dish or on bruschetta. 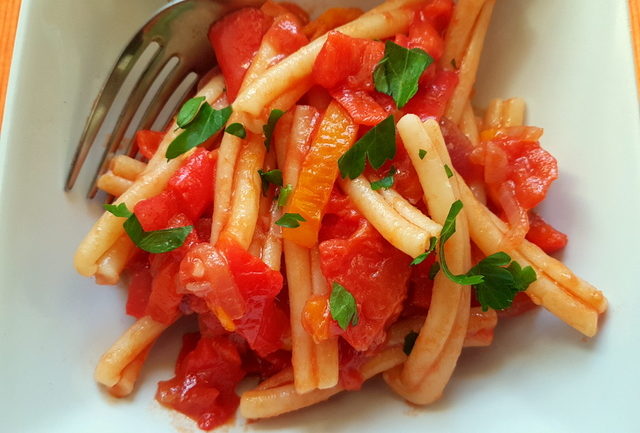 Peperonata is a vegetarian Mediterranean recipe based on sweet peppers (capsicums) stewed in a pan with garlic, onions and tomato sauce. This is a typical Southern Italian recipe, originally from Sicily, Calabria and Campania. But, it is eaten in many other parts of the Italian peninsula. 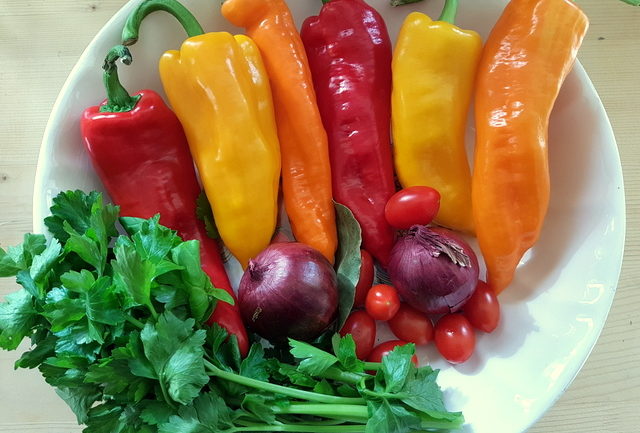 Peperonata is traditionally a summer dish, since sweet peppers are in season in Italy from June to September. Like many Southern Italian recipes, this is a simple uncomplicated dish made with seasonal ingredients that have bold flavours brought out by the way they are cooked. Many Italians prefer to eat peperonata cold and, as is often the case with stewed dishes, it is even better eaten the next day. 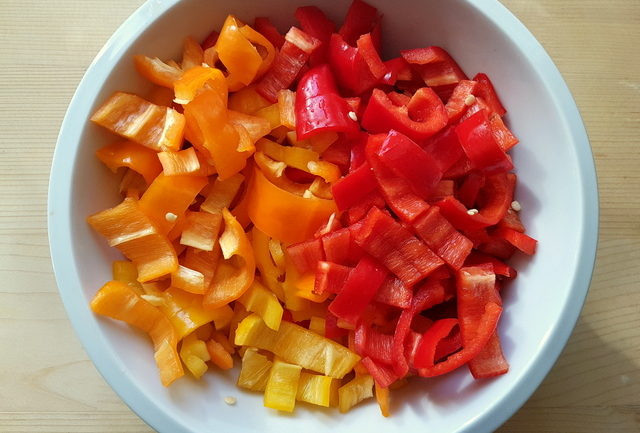 Italians eat peperonata as a side dish with both meat and fish, but also on bruschetta or on pasta, like in this casarecce pasta all peperonata.  I think eating it with pasta is my favourite way to have it! 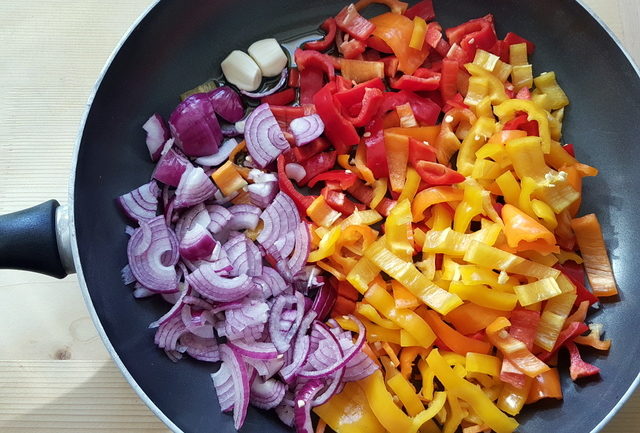 When buying peppers for this pasta alla peperonata choose medium-sized and firm ones. They are usually  sweeter. Also, look out for the orange ones. Those are the sweetest of all. Some people include green peppers but, I prefer the red, yellow and orange ones. You can also just use red ones. In addition, if you can find them, use Tropea red onions from Calabria. These are more delicate than other onions. If not, red onions are best or shallots. 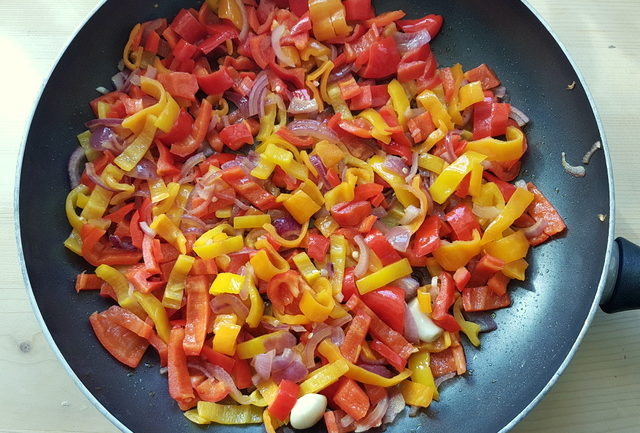 This casarecce pasta alla peperonata is made with a classic peperonata. This is a very simple and reasonably fast sauce. However, simple and fast doesn’t mean bland. This is really tasty! Every region, or even every town, in Southern Italy has its own recipe for stewed sweet peppers. For example, one version in some areas of Sicily includes breadcrumbs, which are added just before the sauce is ready. 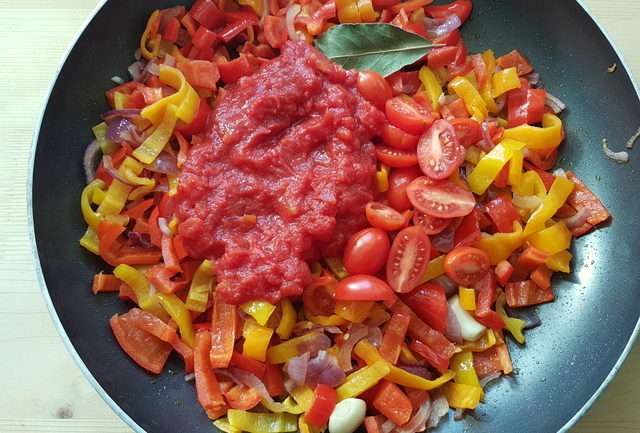 I served this pasta alla peperonata with casarecce pasta from Gragnano. This is a traditional short pasta originally from Sicily but popular throughout Southern Italy. Casarecce are short pasta noodles with curled edges and a groove down the middle. They look a bit like little rolled up scrolls. 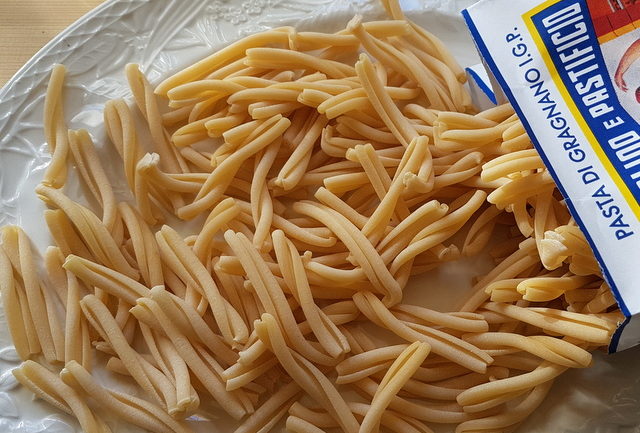 You can read more about casarecce if you click here. I used this pasta because it’s typical Southern Italian and goes really well with the sweet pepper sauce. In fact, I think this is one of the best casarecce pasta recipes I know! However, you can use any type of pasta. I would recommend short pasta like penne, cavatelli, orecchiette or rigatoni. 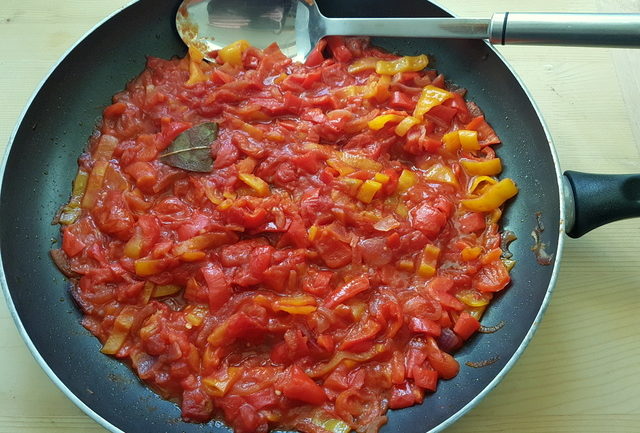 Making casarecce pasta alla peperonata is simple. Just gently fry the onions, garlic and pepper strips until they start to soften. Then add tomatoes and passata and a little wine vinegar and simmer covered for about 30 minutes until the peppers are really soft and everything has come together in a rich stew. While the peppers are cooking you can boil the water for the pasta and cook it. Add the drained pasta to the ready sauce and serve with grated cheese and some parsley or basil if you like. 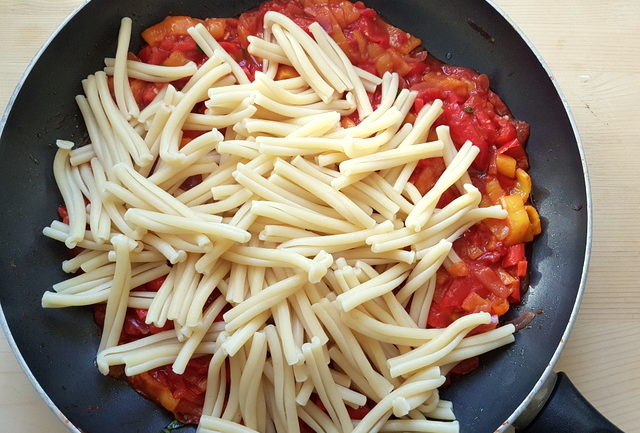 If you do try this casarecce alla peperonata recipe, I’d love to hear what you think. Please write a comment here on the blog or post a comment on the Pasta Project Facebook page. 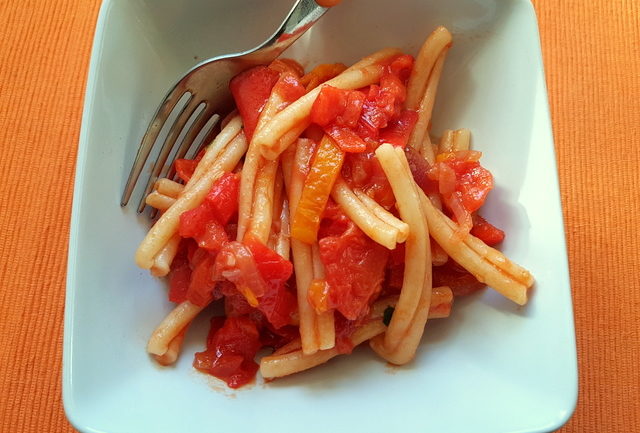 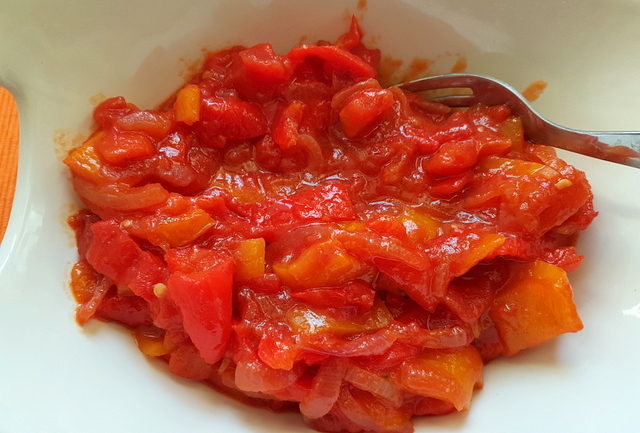 Peperonata can also be served as a side dish or on bruschetta! 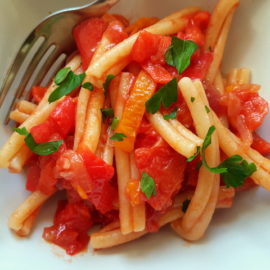 If you make a larger quantity you can save some peperonata to eat as a side dish or on bruschetta. You can also bake the pasta and sauce before serving. Before putting it in the oven, add some grated parmesan or grana on top (or mozzarella) (It’s very good). You can use other pasta for this recipe. I would recommend other typical Southern Italian short pasta like penne, cavatelli, orecchiette or rigatoni.
Keyword bell peppers, capsicums, casarecce, pasta recipe, sweet peppers, vegetarian 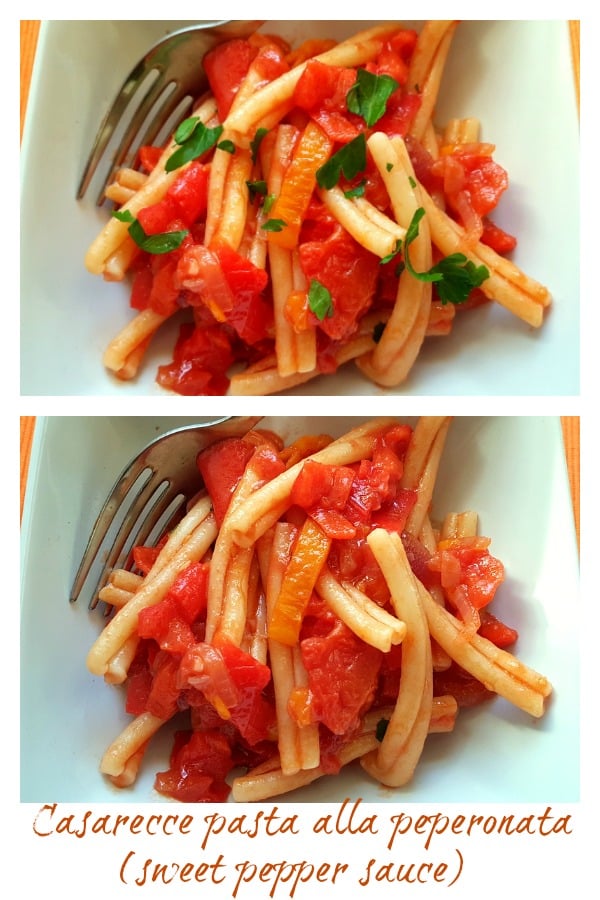