These anelletti pasta eggplant boats are a fabulous Italian version of stuffed eggplant! Full of typical Sicilian flavours, they are seriously yummy and  look great. Your guests will love them!

Eggplants, also called aubergines or brinjal, are a very popular vegetable (actually they are classified as berries!) in many cuisines, especially Mediterranean, Asian and Middle Eastern. Here in Italy, eggplants are a widely-used ingredient in the Southern regions, particularly Sicily.

Did you know that the name ‘eggplant’ was actually coined in 18th century? Originally, it referred to white eggplants which, obviously, looked a bit like eggs!

However, it was the Arabs who introduced eggplants to Sicily in the Middle Ages and then, I guess, their cultivation spread to other parts of Southern Italy.  Well known Southern Italian recipes for eggplant include parmigiana (melanzane alla parmigiana) from Naples and caponata and pasta alla Norma from Sicily. Another recipe I like is stuffed eggplant boats from Puglia.

However, Italians prepare eggplants in many different ways and these anelletti pasta eggplant boats is one of my favourites! In Italian, these are called ‘barchette di melanzane ripene di anelletti’.

Anelletti or anelli is a typical Sicilian pasta most often used in baked pasta recipes like anelletti timballo, a kind of pasta cake from Palermo. These small rings of dried pasta are actually the inspiration for spaghettiOs! But, of course they come from Italy. I’d love to know how Campbells discovered them!

The pasta I used for these anelletti pasta eggplant boats was made by Garofalo, one of my favourite producers of pasta di Gragnano. In my opinion, dried pasta from the town of Gragnano near Naples is one of the best in Italy.

In fact, for pasta makers to label their product ‘pasta di Gragnano’, the pasta has to be produced in a legally defined area in and around the Bay of Naples. It must also be made using Italian durum wheat flour and the calcium poor water of the Monti Lattari. The dough is extruded through bronze dies and dried at low temperatures in the mountain air. The result? Great pasta! So, look out for it! There’s more than one producer.

These anelletti pasta eggplant boats are pretty easy to make. The sauce is mostly the inside of the eggplants and tomatoes. The eggplant shells need to be boiled for 5-10 minutes first and then you just fill them with some pasta and sauce and cheese. I used a primo sale cheese in the sauce. I then sprinkled the eggplant boats with Parmigiano and breadcrumbs before baking.

Primo Sale is an Italian sheep’s milk cheese from Sicily and Sardinia. The name itself literally means ‘first salt’. It describes the early stages of maturation. In Sicily, when the cheese is first taken out of the mould and before being salted, they call it ‘Tuma’. After the first salting, it is called ‘primo sale’. Because this cheese is young, it has a bright white colour and slightly salty milky flavor.

(If you can’t find ‘primo sale’ cheese you can also use ricotta salata or feta for this anelletti pasta eggplant boats recipe.) To make this recipe vegetarian you will need to use vegetarian parmesan not Italian Parmigiano as it’s made with animal rennet.

Eggplants have a tendency to start to turn brown once the flesh is exposed to the air. Therefore, it’s best to have a pot of water on the boil and some olive oil ready to heat in a skillet or deep frying pan before preparing them.  You can then start cooking the flesh and boiling the shells pretty quickly.

Alternatively, you can soak the eggplant flesh and shells in a bowl of water with a couple of tablespoons of salt until you are ready to use them. Then rinse well and pat the flesh dry before frying. This also helps to prevent it absorbing a lot of oil when frying it. However, I didn’t do this for these anelletti pasta eggplant boats.

Serve these eggplant boats as a starter or main course.

Here in Italy, pasta is often served as a first course (primo), rather than a main course. Consequently, one of these eggplant boats makes a perfect starter. For a main course, I would suggest two per person. The ingredients in this recipe are for 4 anelletti pasta eggplant boats. Double the quantities if you want to make 4 main courses.

If you love the look of this recipe, have a look at my favorite Italian eggplant recipes. 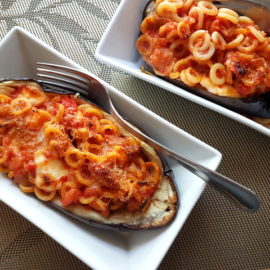 This recipe calls for Sicilian anelletti/anelli pasta rings. If those are not available, you could use other small pasta such as orzo or very small pasta shells. If you have leftover pasta and sauce it will keep in the fridge for a day or two and you can bake it or heat in the microwave for another meal (we bake ours!) Italian Parmigiano cheese isn’t vegetarian as it’s made with animal rennet. To make this recipe vegetarian use vegetarian parmesan.
Keyword anelletti, baked pasta recipe, eggplant boats, eggplants, Italian recipe, pasta bake, pasta stuffed eggplants