One of the most iconic dishes in Sicilian cooking is caponata. This sweet and sour Mediterranean veggie dish is delicious as a side with both meat and fish and, as in this recipe for casarecce pasta caponata, makes a fabulous pasta sauce!  Pasta alla caponata is great warm or as a pasta salad.

Caponata is an eggplant based summer vegetable stew that Sicilians often serve as a cold antipasto or a side dish with fish. There are different recipes for this dish throughout Sicily. However, the usual basic ingredients are eggplant, celery, capers, onions, green olives, tomatoes, white wine vinegar and sugar. The latter are what give caponata its sweet and sour flavour.

In this casarecce pasta caponata, I have included sweet red and yellow peppers (peperoni in Italian). This is apparently typical of the versions from Trapani and Catania. However, some recipes from Catania include peppers but others don’t! Other caponata recipes call for pine nuts, almonds, raisins, potatoes or garlic or fish. There are even versions with cocoa powder! Sicilians say there are more than 30 versions of this dish on the island!

Sicilian caponata is similar to French ratatouille. However, according to food historians, caponata is older than ratatouille. In fact, caponata first appeared in written sources in the early 1700s. Some people believe the Spanish introduced this dish to Sicily. Others think it has Arab origins.

There are also various theories about the origin of the term ‘caponata’. In one theory, they say it derives from  the capone or lambuga fish (mahi mahi), which Sicilians traditionally ate with a similar sweet and sour sauce. Another belief is that the name comes from the Latin noun ‘caupona’ (tavern) and from the adjective ‘cauponia’, meaning ‘tavern food’. Of course, there are other theories too.

In the past, caponata was normally a one plate meal accompanied by bread, often a dried bread. Originally, the wealthier aristocratic Sicilians used to consume a fish-based caponata. Over time, the fish was replaced by eggplants among the poorer population, who could not afford to buy fish. Capone, in particular, was an expensive and much sought after fish.

There’s a recipe for a fish-based caponata in an 1839 cookbook called ‘Theoretical and practical cuisine’ by Ippolito Cavalcanti. This recipe is quite rich and consists of a sort of toasted bread (perhaps today’s freselle) soaked with vinegar and seasoned with sugar, salt, pepper, oil, capone fish (sometimes replaced by mackerel), lettuce, escarole, cucumber, olives and sweet peppers!

In some places, they still sometimes make caponata with capone or even octopus. However, nowadays the most popular fish pairings are grilled or pan fried swordfish or fresh tuna.

The Arabs introduced eggplants to the Sicilians in the 15th century. Eggplants (or you might call them aubergines) are to Sicily what potatoes are to Ireland.  There are three main kinds of eggplants cultivated in Sicily; the very dark oval or long ones that most people outside of Italy know, long zebra eggplants which have a lighter striped skin and the more rotund, lighter coloured Sicilian eggplant.

The lighter coloured round Sicilian eggplants are what I used for this casarecce pasta caponata. This type of eggplant has a dense whiter flesh and less seeds than the others, but of course you can use whichever you find available.

You will need to cut the eggplant into cubes and salt it for 30-60 minutes before rinsing and frying it. So it’s probably best to salt the eggplant before preparing the other ingredients. Some people say that salting isn’t necessary but I find that the eggplant absorbs less olive oil when you salt it beforehand.

My Sicilian hubby tells me that the proper way to make caponata is to cook each ingredient separately and then put it together. However, I’ve found as many variations in the method as versions of the recipe! For this casarecce pasta caponata, I just fried the eggplant separately after salting it.

I cooked the rest of the ingredients together in the same skillet. Starting with the peppers, then adding the onions, then the celery followed by the tomatoes then the olives and capers. Once everything was cooked I put in the fried eggplant and then the vinegar and sugar! The result was fantastic!

Caponata can be eaten as a side dish as well as a salad. This casarecce pasta caponata is also fabulous as a salad and can be kept in the fridge for 2-3 days. It’s vegan and vegetarian so there are is no meat or dairy that can spoil quickly.

Nearly all pasta salads are made with short pasta here in Italy. I used casarecce, one of my favourite Southern Italian pasta shapes. Casarecce is short pasta noodles with curled edges and a groove down the middle. It looks a little like small rolled up scrolls. You can read more about this pasta in my casarecce post.

Like caponata, casarecce is originally from Sicily. In fact, the casarecce I used was made by one of the best pasta companies in Sicily. My hubby brought it back for me the last time he was there. This company is called Valle del Grano.

In my opinion, the best pasta in Italy is made by brands that use 100% Italian wheat (preferably organic), extrude the dough through bronze dies and slow dry it. Valle del Grano ticks all those boxes. They make their pasta with 100% Sicilian durum wheat grown in the Dittaino valley between Catania and Enna. Durum wheat has been grown in this area since Roman times. Their pasta is also extruded through bronze dies and slow dried.

Of course, there are other companies that make good quality casarecce, for example; La Molisana, Rummo  and Garofalo, who also make whole-wheat and gluten free versions. If you don’t have casarecce for your pasta alla caponata, you can use other short pasta such as penne, sedani or elicoidali.

Although pasta with caponata isn’t an old traditional combination, it’s become very popular. I’m sure if you try it, you’ll understand why. This recipe makes enough for 4 generous helpings of pasta plus some extra caponata to have as a side dish a day or two later.

If you do make this casarecce pasta caponata recipe, I’d love to hear how it turns out. Please write a comment here on the blog or post a comment on the Pasta Project Facebook page.

Other casarecce recipes on The Pasta Project

Want to make casarecce at home? Check out my new post for homemade casarecce 2 ways. 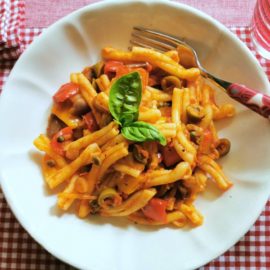 Prepare the other ingredients.

Finish the caponata and serve.

Caponata tastes even better the next day, so you can make it in advance. The pasta salad also tastes great the next day and can be made the day before. I keep it in the fridge and then either zap in the microwave or allow it to come to room temperature before serving. The same goes for leftovers.
Keyword caponata, casarecce, eggplant, pasta salad, vegan pasta, vegetarian