Pasta with Nduja from Calabria 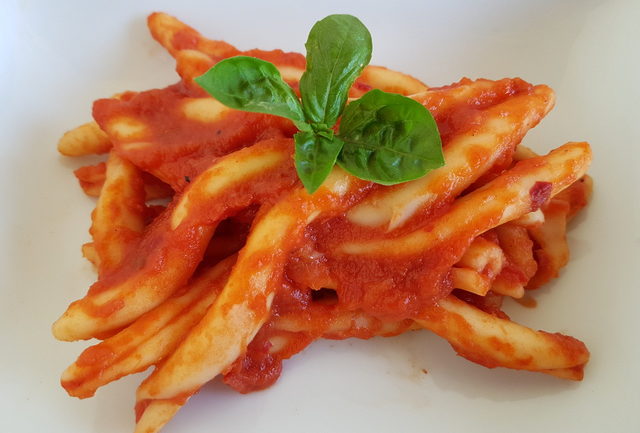 They say that in hot weather it’s good to eat spicy food. Certainly, most countries where hot spicy food is popular have a hot climate. In Italy, the South is warmer than the North and Southern Italians definitiely like their red chilli peppers called peperoncini. One of the most well-known spicy foods from the Southern regions, particularly Calabria, is nduja. (go straight to the recipe)

What exactly is Nduja?

Nduja is a soft, spicy, spreadable salami made with pork meat (typically from the throat, underbelly, head and shoulder), a bit of fat, salt and a lot of peperoncino. It is considered one of the most well-known, if not the most famous, of typical Calabrian foods. In fact, in Calabria there is a popular annual Nduja festival in the small village of Spilinga where this salami originates. The name ‘nduja’ comes from the french word ‘andouille’, which means sausage. 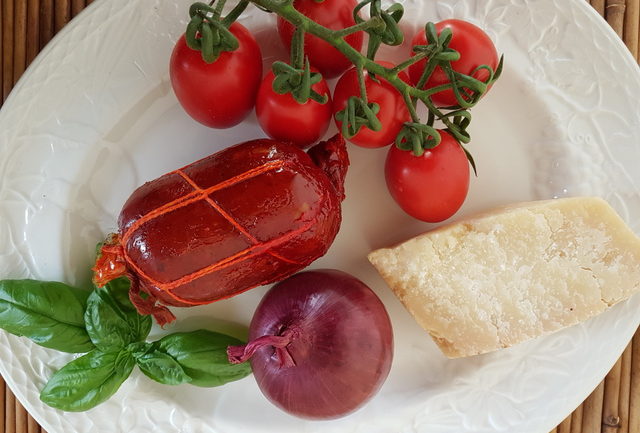 In general, nduja is really quite spicy. However, a less spicy version can apparently sometimes be found. I’ve never looked for it as we love ours as spicy as it gets! Calabrians believe that it is an aphrodisiac because of all of the chilli pepper it contains. Whether that is true or not, I can’t say but it has a unique flavour and certainly tastes wonderful. My Sicillian husband introduced me to it and I have been hooked ever since! And let’s not forget that chilli peppers are good for your health and your heart! 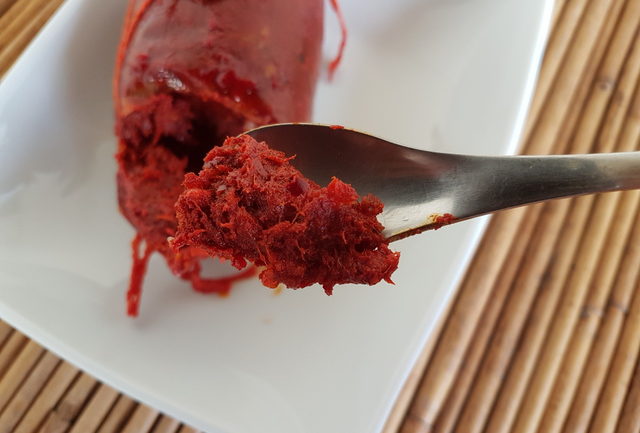 How this soft spicy salami is made!

Nduja is made by grinding the pork meat and then kneading it together with salt and Calabrian peperoncino (chili pepper). This mixture is then made into a sausage by piping it into natural casings of pork intestinal lining. The sausage is then smoked slightly and allowed to rest and season for a number of months. 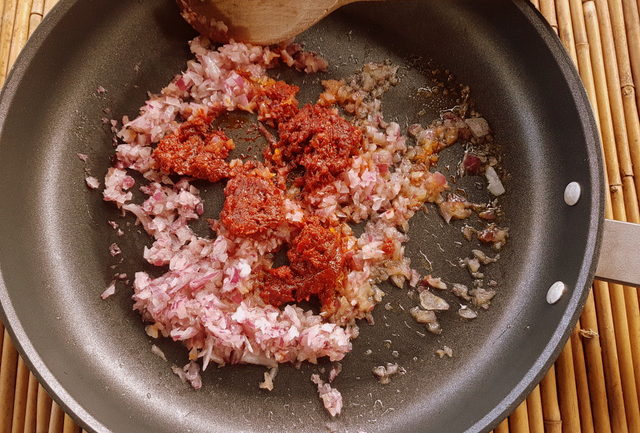 Unlike normal salami, Nduja is made to a very soft, spreadable consistency, making it completely different from other salami. The quality of the peperoncino used is extremely important to the flavour. In Calabria, it is rare to find it made with lower quality chilli peppers. So, if you get the chance to buy some, make sure it’s been made in Calabria, where peperoncino is not only an ingredient, but a symbol of the region’s culture, traditions and history. 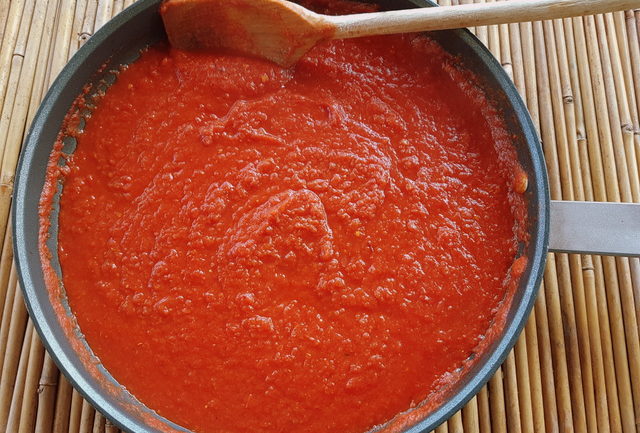 The quality of pork meat is also important. In Calabria most pig farms are quite small and the pigs (usually Black Calabrian pigs) are often allowed to roam and forage in the woods. They feed on acorns, chestnuts, wild marjoram and spearmint as well as roots and vegetables. They are usually at least 2 years old when slaughtered, so they are allowed to grow at a natural rate and the young stay with their mothers. Needless to say rearing pigs in this way results in not only happier pigs but high quality tasty meat and is probably why so many of Calabria’s pork products, including Nduja, are so good! 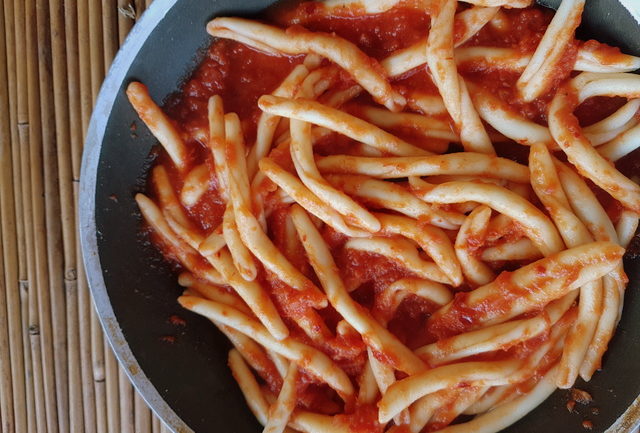 Not just on pasta!

Calabrians eat Nduja mostly as a dip or spread with bread, in frittata, on pizza or melted into a tomato based pasta sauce (recipe on next page). However, it has become very trendy outside of Italy and many well-known chefs are using it to give an extra kick to other dishes. For readers in the UK, I have read that Waitrose stock Nduja from Calabria and apparently there are producers in other countries, such as USA, but I have no idea of the quality.  You can also buy it on Amazon. 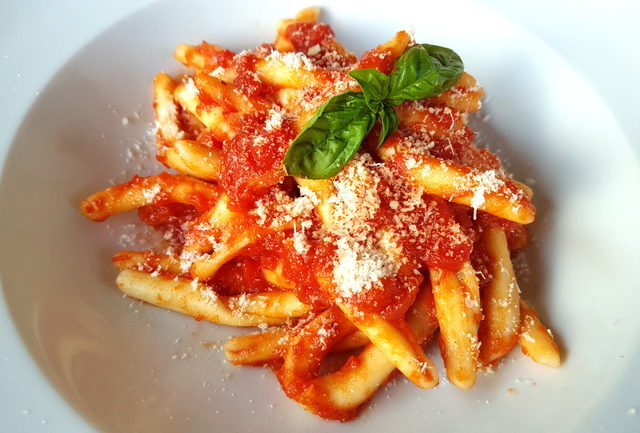 Nduja is typically eaten with short pasta such as maccheroni, penne, fusilli etc or spaghetti. In Calabria, they usually eat it with fresh or dried fileja pasta. The recipe on the next page can be used with any of these types of pasta. I do hope you’ll get to try it out. Like many Italian pasta recipes this is simple to make and requires very few ingredients but the taste will have you and your guests coming back for seconds. I promise you! 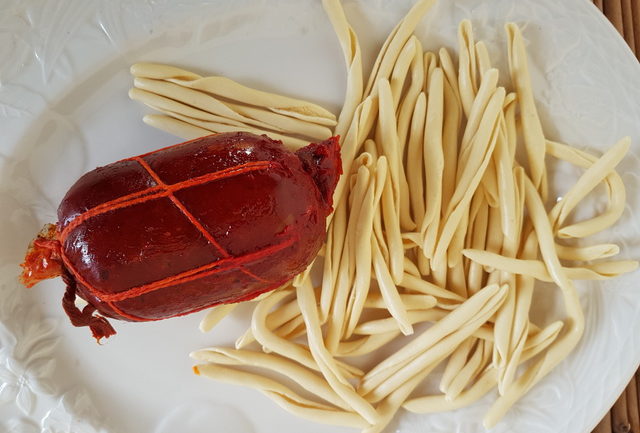