Pasta with mushrooms has long been a favourite of mine. This vegan/vegetarian olive leaf pasta with king oyster mushrooms is a traditional dish from Puglia in Southern Italy. It’s easy to make and one of the best mushroom pasta recipes ever!

BUT, in my opinion, king oyster mushrooms are king in comparison to many other fungi! Some people call them the cheap porcini! They are definitely my second favourite mushroom after porcini (ceps).

What are king oyster mushrooms?

These mushrooms are a type of oyster mushroom with a thick white stem and a flat brown cap. When cooked, they have a really meaty texture, which is comparable to seafood such as calamari, abalone or scallops. In fact, they are a great substitute for meat for vegetarians and vegans.

King oyster/king trumpet mushrooms grow wild in cooler climates throughout the Middle East, Europe, and North Africa. They are fungi that feed on the stems of herbaceous plants. It is actually possible to grow these mushrooms at home!

Here in Italy, king oyster mushrooms are foraged in Puglia, Basilicata, Sicily, Sardinia, Calabria and parts of Lazio. However, the biggest concentration of wild and farmed king oyster mushrooms is on the Murge Plateau (La Murgia) in Puglia. This is a 4,000 km² subregion which includes the Alta Murgia national park. The Murge covers the centre of Puglia and part of the province of Matera in Basilicata.

This is a part of Puglia I haven’t been to except for the town of Alberobello in what is called the lower or low Murge. Alberobello is famous for its trulli houses. The Alta Murgia Park is a large, protected area that consists of mainly calcareous rocks, deposits of clay and tuff, ancient villages and fortified farms. It is considered a perfect example of a Mediterranean steppe.

Although much of the landscape is pretty wild, La Murgia is rich in places of outstanding cultural and archaeological interest. For example, the De Lucia quarry, with thousands of dinosaur footprints dating back to about 70 million years ago. Plus, the Lamalunga cave, where there is the only complete skeleton of a man, known as the Altamura man, in existence dating back to 130,000- 100,00 years ago!!

Apparently, this area is also among the Italian territories with the highest density of typical local products. Apart from man made products like olive oil, cheese, bread, pasta and wine, La Murgia is also famous for game and lots of wild herbs, legumes, edible plants and mushrooms. However, the true pride of the Alta Murgia is the king oyster mushroom. In fact, it’s such a versatile and appreciated ingredient that locals use it in many many types of recipes.

Cardoncelli mushrooms have been foraged since ancient times. Even in the Middle Ages, they were much sought after. Then, it was believed that they had aphrodisiac properties! In fact, the Catholic church added them to a list of foods capable of distracting Christians during penance!

Today, king oysters aren’t considered to have aphrodisiac properties! But, they are certainly excellent for protecting the cardiovascular system and strengthening the immune system. They are rich in vitamins and biotin, as well as being very low in fat. This makes them an ideal food for those on a low-fat diet (only 28 calories per 100 g).

I used olive leaf pasta with the king oyster mushrooms for this recipe. As I’m sure you have guessed, this pasta is shaped like olive leaves. This is a quite particular pasta typically found in the Italian regions where olive trees abound! One of these is, of course, Puglia. In fact, Puglia is the region where the most olive oil is produced in Italy!

Dried olive leaf pasta is usually available either white or green, or a mix of both colours. I used a white pasta. But, if you can’t find olive leaf pasta, you can use cavatelli, casarecce or orecchiette for this traditional recipe.

Other ingredients for this king oyster pasta recipe.

Like many traditional Italian pasta recipes, this one doesn’t have a lot of ingredients and is pretty simple to make! Apart from the pasta and the mushrooms, all you need is some garlic, onions, peperoncino, tomatoes, parsley and bread croutons.

However, to get the best out of the ingredients you will need to cook some things in batches. I sautéed the mushrooms and tomatoes separately before putting them together with the rest of the sauce ingredients. Because king oyster mushrooms are pretty meaty, they take a little while to cook. However, they taste amazing when slightly browned!

I also cut the mushrooms in different ways depending on their size. I cut the thick white stems of the bigger mushrooms into thick rounds. They actually look like scallops when cooked (They taste a bit like scallops too!). Then I sliced the larger caps and the smaller mushrooms.

The tomatoes also need to be sautéed separately to really soften and develop a good flavour. I used largish vine tomatoes cut into cubes. Halved cherry tomatoes would be a good alternative. Once you have prepared the mushrooms and tomatoes, the rest is quite fast. In fact, the whole recipe doesn’t take much more time than what you need to boil the water and cook the pasta!

If you make this king oyster mushroom pasta, I’d love to hear how it turns out and if you liked it. Please leave a comment here on the blog or on The Pasta Project Facebook page. 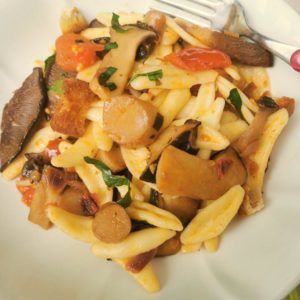 This traditional vegan/vegetarian mushroom pasta recipe from Southern Italy is one of the best mushroom pasta dishes ever! Easy to make and full of flavour! The star of this dish is king oyster mushrooms aka king trumpet mushrooms but you can use other kinds too! Great with orecchiette or cavatelli as well!
5 from 22 votes
Print Recipe Save Recipe Saved!
Prep Time 20 mins
Cook Time 30 mins
Course Main Course
Cuisine Italian, Mediterranean, Puglia, Southern Italian
Servings 4
Calories 609 kcal

Cook the tomatoes and bread croutons

Other mushroom pasta recipes to try.