Ravioli made with gnocchi dough, recipe from Friuli Venezia Giulia.

Ofelle alla Triestina are an unusual and tasty homemade ravioli from Trieste in Friuli Venezia Giulia filled with sausage, veal and spinach and served dressed in melted butter and grated cheese! These gnocchi ravioli are a delicious dish from a region full of culinary treasures!

So what are ofelle alla Triestina?

Some people call them potato ravioli, others say gnocchi ravioli. But, whichever description you use, ofelle Triestine or ofella alla Triestina are a unique type of ravioli filled with sausage meat, ground veal and spinach. These ravioli are unique because they are only made in Friuli Venezia Giulia and the dough is similar to an gnocchi dough. Yes it contains potatoes. But, the finished filled pasta looks like ravioli! So, gnocchi ravioli!

I discovered this recipe whilst researching pasta from Friuli Venezia Giulia. This is Italy’s most eastern region. It not only borders Austria and Slovenia, but has a complex history of occupation through the ages. This includes parts or all of the region being ruled at one time or another by the Byzantines, the Roman Empire, the Venetian republic, Napoleon and the Austro-Hungarian Empire.

Without going into a long narrative about the history of this Friuli Venezia Giulia, suffice to say that the cuisine in this part of Italy has been influenced not only by its neighbours but also by the occupying states. Here, you can find dishes you won’t see in other parts of the Italian peninsula. Even some of the ingredients are unique to this region.

Two examples of this use of unusual ingredients are two recipes I posted recently for cinnamon spiced pork ragu and another for tagliolini alla San Daniele with poppy seeds.

Both filled pasta and gnocchi are ancient traditional foods in Italy, particularly in Northern Italy. However, the only traditional example I have found of potatoes used to make ravioli dough is this recipe for ofelle alla Triestina. This is not a pasta that you will find ready-made. So, the only way to try it is to travel to Trieste or make it yourself!

The method for making the dough for ofelle is much the same as making potato gnocchi. However instead of forming gnocchi you need to roll the dough out like for ravioli. Getting the right consistency and thickness is a little more difficult. However, the rolled out dough can, and needs to be, a little thicker that ravioli dough.

At first, I was a little skeptical about the thickness. But, actually, if you make them too thin, the ofelle will fall apart. And, although they are thicker than ravioli, they taste like gnocchi, so no excessive doughy flavour.

The filling is pretty easy to make and very tasty. These ravioli don’t need a sauce as such.Traditionally, they are served with melted butter and a mountain cheese called Montasio. However, you can use Parmigiano Reggiano or Grana.

This is an unusual type of pasta that does require a little bit of work. However, it’s more or less the same as making homemade ravioli or gnocchi. I’m sure that if you try these ofelle alla Triestina, you’ll love them as much as I do!

If you do try this ofelle alla Triestina recipe, I’d love to hear what you think. Please write a comment here on the blog or post a comment on the Pasta Project Facebook page. 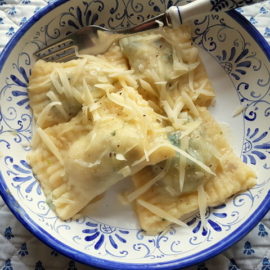 If you are interested in learning how to make homemade pasta and other types of gnocchi, check out my shop page for some great video online courses from my friends in Rome! Nothing beats learning to make pasta from Italians! Plus while you’re there why not order a copy of one of my pasta recipe cookbooks or checkout some recommended pasta making tools?